Hitting the Bullseye: A Family Affair

“We have seen a huge increase in people wanting to learn traditional archery because of the recent Olympics and movie trends,” said Thomas Shinkle, archery representative for The Outdoorsman.

Center Grove High School senior Katie Huntzinger, 17, and her sophomore brother, Ethan Huntzinger, 15, have been archery competitors since long before the blockbuster movies The Hunger Games and Brave ever hit the big screen. 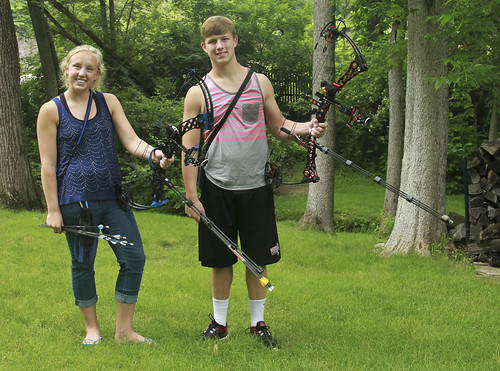 Both teenagers are avid archers, along with their father, Doug, uncle and aunt, who are pro-archers. The family affair with the sport started with Doug and his identical twin brother. Growing up in a small town, they tried their hand at archery as children. They found the sport fun and challenging, leading them both to use archery for hunting and competitions later on in life. Their passion for the sport led each of the brothers to pass it on to their own families.

Finally big enough to pull the bowstring, Katie and Ethan would play outside, imitating their dad and his beloved sport. Making for great daddy time, Doug began introducing the children to the sport of archery. He set up targets for the children using big tic-tac-toe bags and balloons. The games taught the novice archers to determine their distance and accurately shoot. “By the time we came of age to compete,” Katie said, grinning, “we were already familiar with the competitions and the whole archery concept.” 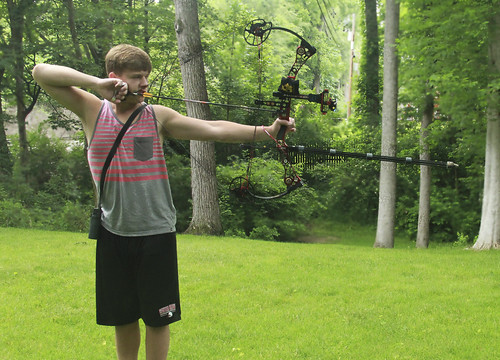 The only equipment an archer truly needs are a bow and an arrow. However, the bow, throughout history, has been the piece of equipment that must fit the individual archer. While several types of bows exist today, the Huntzinger family prefers to carry the compound bow. According to Ethan, many components on the bow help provide consistent and accurate shots. For instance, mounting stabilizers to the front of a compound will reduce movement on release of the string. Additionally, the compound, which resembles a traditional bow, carries pulleys, or cams, on each end to allow for a steadier arm for aiming. Ethan explained the cams this way: “Pulling back on a bow takes about the same amount of force to hold it fully drawn as it does to draw it back. When you have to wait for your shot in that position for any length of time, the aiming arm quickly gets tired. The cams take the force off the archer’s arm, allowing for a steadier aim.”

Some think of archery competitions as a blend between bows, arrows and golf. This is likely because of the different course layouts, the varying challenges presented by each target, and the fact that archers shoot in groups as they navigate the course. Archery competitions feature targets set at different distances over unusual or rough terrain, often in rural or wooded areas. Targets can be flat or three-dimensional. But, according to the siblings’ mother, Amy, the teens enjoy the 3-D format because of the realistic targets and the challenge of calculating the distances. 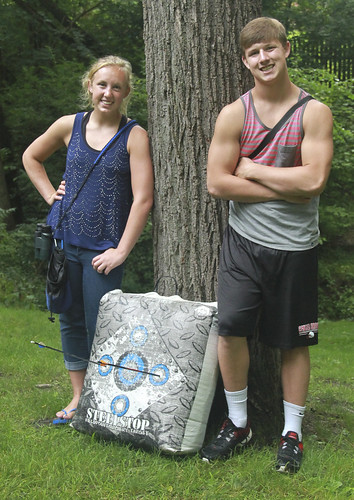 Three-dimensional archery uses life-size animal targets made from foam. The targets themselves have a set of scoring circles, with the higher points centered over areas such as the heart or lungs. Archers shoot from color-coded stakes in the ground for the distances appropriate for each division or class. For example, a 9-year-old girl would not be placed in the men’s age 19-25 red division. She would be placed in a division more suited to her capabilities, maybe the boys and girls age 9-11 yellow class.

Competitions have taken the family throughout the Midwest and eastern coastal states, including Pennsylvania, Michigan, Ohio, West Virginia and New York. Katie and Ethan have impressive records, both ranking ninth overall in Nationals, and Katie winning third in the 2010 World Championship.