Honored to Fly on the Indy Honor Flight

I first learned of the Indy Honor Flight as I crawled on the floor with toddlers, diligently distracting these kiddos from harm’s way. In the nursery trenches with me was a friend whose sister had just arrived the night before from participating on the spring flight, and as she described the experience, I was instantly ready to enlist.

The Indy Honor Flight is a part of the National Honor Flight Network whose mission is to transport America’s veterans to Washington, D.C., to visit the memorials dedicated to honor their sacrifices.

In the year before they called me to serve, I doggedly pursued the opportunity to fly as an Ambassador, the volunteer who couples with a veteran to assist them with their every desire while on the one-day trip. Even though the Indy Honor Flight is always looking for volunteers, it can be a wait before an opening arises, as it’s preferable for veterans if a family member can serve as their Ambassador. 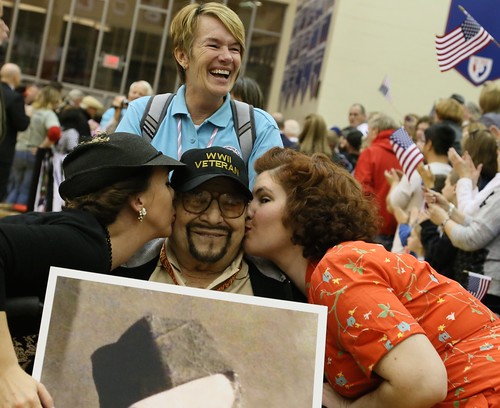 The Call to Action
On Sunday, March 15, I received the call to action, and the three weeks leading up to my deployment became a whirlwind of activity. I had to make contact with and physically meet my veteran, attend training, recruit letter writers, market the homecoming and send in my payment. (While the veteran’s costs are covered, they request Ambassadors make a donation to cover expenses, a donation I was happy to make!)

Just a week later, I found myself in the living room of one of America’s heroes — a bonafide World War II veteran, Retired Marine Corp Corporal James Speziale!

We detailed the trip logistics. When I asked him about his experience during the war, the hair on my arms stood at attention as he recounted that he had actually witnessed the flag raising on Iwo Jima! Nothing is more iconic than that image. To hear the scene described in detail by an eyewitness brought tears to my eyes.

The Honor Flight weekend was to begin April 3 and would become a “historic” flight for the organization, as the trip was to include two planes, eight buses and 200 veterans from World War II, the Korean War and Vietnam. The World War II veterans, if physically able to go, are the first priority since they’re dying at a rate of nearly 500 a day. Next up is the Korean veterans followed by Vietnam veterans.

The evening before the flight, I picked up Corporal Speziale for the “meet and greet,” a reception where everyone who will be flying the next morning picks up welcome packets, meets fellow veterans and views for the first time a poster-sized picture of themselves provided by a family member. The posters stay with the flight all day long and are offered to the veteran as a souvenir of the trip. 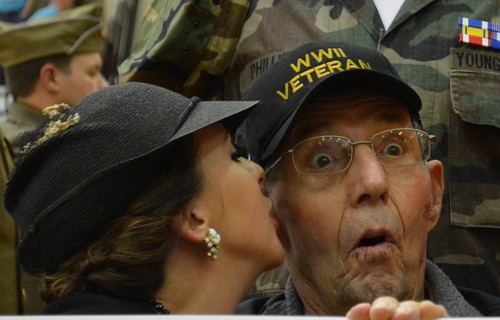 Roll Call 0430 Hours
Actual Ambassador Deployment began with a 3:15 a.m. wake-up call for the 4:30 roll call at Plainfield High School followed by a 7:30 flight to Washington and a 9:15 arrival at Reagan International Airport. From the moment we exited the tarmac until we boarded the police escorted buses, the crowds were on their feet, applauding, saluting and shaking hands to thank these brave men and women for their service.

To say I was moved to tears is a massive understatement. Pushing his wheelchair through the airport, I bawled like a baby. I can only imagine how the veterans must have felt to receive such an overwhelming ovation, and the reception was the same everywhere we went. My heart swelled and nearly burst with pride!

From the airport, the troops were escorted to the World War II Memorial (which most had never seen), the Korean War and the Lincoln Memorial as well as the Vietnam Memorial. Along the way, an onboard tour guide noted points-of-interest including the U.S. Navy and the Air Force monuments.

Next our orders included a short drive to Arlington National Cemetery for the Changing of the Guard followed by a trip around the Marine Corps War Memorial (especially moving for my veteran) as well as the Pentagon.

Back at Reagan airport, we again received the same ovation that would never get old with everyone applauding, saluting and shaking hands. In addition, the flight home and homecoming were no less exciting.

I am not a veteran, but I am a patriot, and as such, I was honored, humbled and proud to serve, if only for one day. “For many are called, but few are chosen.” I was one of the honored ones. 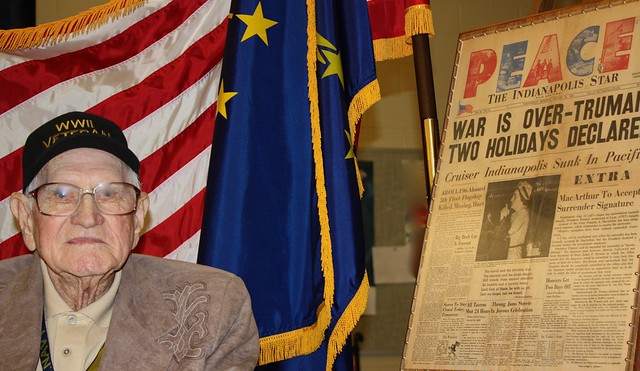