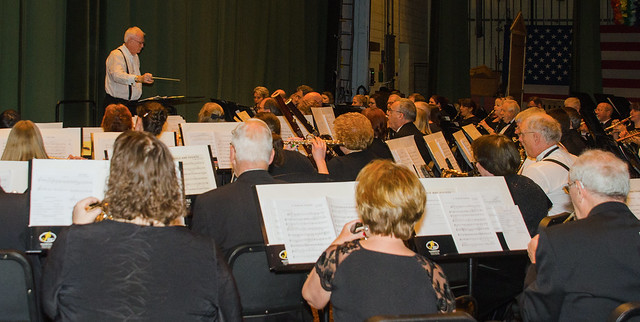 As I enter the empty, darkened auditorium, I hear the echoing trill of a trumpet in the wings, running scales to warm up. Then I hear the blatt of a trombonist doing the same. Over the next few minutes, more instruments chime in — a clarinet, a French horn, a couple of saxophones, flutes and so on. I get nostalgic for my high school days in the band room. I realize that I miss playing music, and I’ll bet there are other ex-band geeks like me reading this story that do as well.

But as adults, we found less time to spend playing our instruments, and they were relegated to the back of the closet. That’s where my saxophones live today. As parents of children in the school band, you may have become a “Band Mom” or “Band Dad.” But you found that living your musical life vicariously through your children wasn’t enough. Maybe you found that you miss the challenge, the artistry and the friendships that playing music brings.

That is exactly the position in which Steve Roskowski found himself a little over five years ago. A trombone player in high school that continued to play a little after college, he and his wife became involved in their children’s school band as volunteers when the family relocated to the Greenwood area. But for Steve, that wasn’t enough. He wanted to play, so he began a search to find out what opportunities existed in the area. That is how he found the Greater Greenwood Community Band. 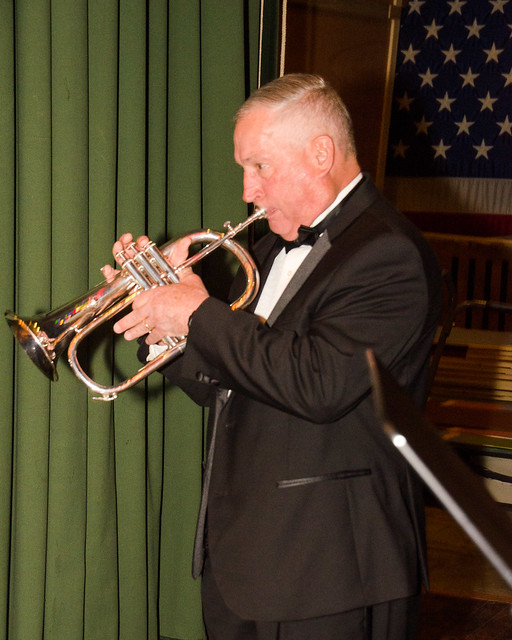 THE BEGINNING
Back in 1993, tenor saxophonist Duane O’Neil was looking for a way to continue to play music and allow other musicians in the community to perform as well. He knew community bands existed in some areas, but nothing was available around here. O’Neil felt the Greenwood community and surrounding area needed and would support a community ensemble, so he approached Jon Sutton, Director of Bands for the Greenwood Community Schools. The two created what is now the Greater Greenwood Community Band (GGCB).

Through Sutton, a former Ball State band director and professor of music, Dr. Joseph Naumcheff was appointed the first Musical Director/Conductor of the GGCB. An organizational meeting was held May 25, 1993, with 27 members attending, and the GGCB was born.

TWENTY-THREE YEARS LATER
It started with 27, but now the band has grown to a steady state membership of around 80 musicians. A number of conductors have been involved with the band over its 23-year existence. Currently the band is directed by Thomas Dirks, a faculty member at Franklin College who is following a 26-year career as Center Grove School Corporation Director of Bands where he guided the band program into national prominence.

The GGCB also has the good fortune to have Ora Pemberton as associate director.

Pemberton, in addition to heading band programs in several Indiana high schools and Concord College in West Virginia, helped found The Columbus City Band, which he also directed for six years starting in 1983.

The organization is a volunteer affair led by a 12-member board that oversees things such as stage setup/teardown, instrument management, the management of a large music library, finances, promotion, printing (calendars, programs, etc.) and hospitality. Roskowski is currently president of the board and indicates that active participation by members enhances the experience.

As soon as people get involved and help, he says, “They take a lot more pride in the whole organization.” Being active, members “have a lot more fun” and “find out things about people [they] didn’t know,” he says. “The band is becoming more of a community.”

The band performs year-round with indoor concerts in the Greenwood High School auditorium and summer concerts at the Greenwood Amphitheater in Surina Square Park. A schedule of events can be found on the GGCB website. In addition to the full band, smaller ensembles play at different community events like the Bargersville Santa Train or visits to assisted living centers. As Steve says, the band members are looking for “any excuse to play.”

GGCB is meant to be an adult band, post-high school age and older. The group rehearses every Thursday evening in the Greenwood High School band room with most performances occurring on weekends. Several members mentioned that they have a “no audition policy,” so everyone is welcome. They suggest that anyone interested should come to one of their Thursday rehearsals and sit in to see what it is like.

Roskowski recommends two things before you come: 1) practice a little beforehand just to make sure your lips are in decent shape and 2) send an email through the band website letting them know your intentions, so the band can make your visit a welcoming experience.

The last thought Steve left me with was the strong musicality of the band members. About the directors, he says, “The music they choose really pushes people,” and this “makes a much better band.”

When he joined, he was amazed at the high level of musicianship he found. He hopes the challenging music is more enjoyable for the audience as well. From listening to their April 9 concert, I can tell you that they are very good, and you will enjoy the music.

Gala for the Grove