Knitting for Life: For the Sake of a Hospice Home

Sister Marlene Shapley, an Order of St. Francis nun, has invested her life in serving God through serving the spiritual and physical needs of people. Yet even she has been surprised at the simple way she and others have been able to make a difference as of late. 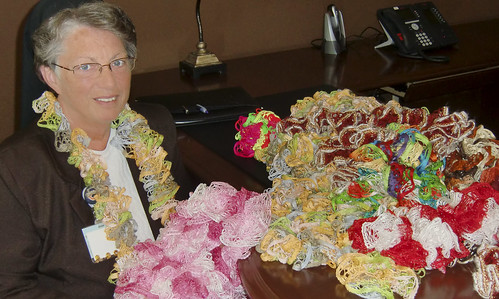 Who knew knitting scarves could raise so much money for a good cause—a hospice house? Or that these wavy ruffle scarves would sell, as the saying goes, like hotcakes?

Sister Marlene, vice president of mission services, and co-worker Susan Douglas at Franciscan St. Francis Hospital on the south side of Indianapolis, have been delighted to see a simple craft project bring forth more life than expected. Since last October, the sale of the scarves has added to the total Franciscan St. Francis amount needed to begin building a freestanding Hospice House on the southside campus.

How much difference can selling scarves make? As of June: $10,655. That’s pretty good for a craft project.

WHY A HOSPICE HOUSE?
The hospice concept is to provide aid during temporary ailments that require significant recuperative time, or to care for people who need full-time care in their final days on earth. The Hospice House will be a home away from home when a patient needs more care than family members can give. This facility will be in addition to the home hospice services Franciscan St. Francis Health already offers.

Sister Marlene knows personally how life-altering that help can be. Because she is a trained nurse, she was able to care for her father as he succumbed to cancer. Five years later, her brother also died of cancer. Her belief in the value of what a hospice facility can accomplish is reflected in her passion.

“Hospice House will be a residential facility to provide comfort for family who cannot take care of someone in their home,” she says. “Not every family has a daughter who is a nurse. People underestimate what it takes to care full-time for a loved one.”

The level and intensity of the work involved with such care was something Sister Marlene could provide because of her professional training. However, the emotional challenges are an additional—and often overlooked—factor. While giving proper medical care to her father, she says, “At points, I couldn’t be his daughter. I had to be his nurse.”

SCARF-A-WHAT?
Susan Douglas, manager of the hospital dialysis department, brought the idea of making ruffle scarves to Sister Marlene for a fundraiser. Douglas’ mother had died of cancer. So both women had a personal stake in helping others through crucial times. 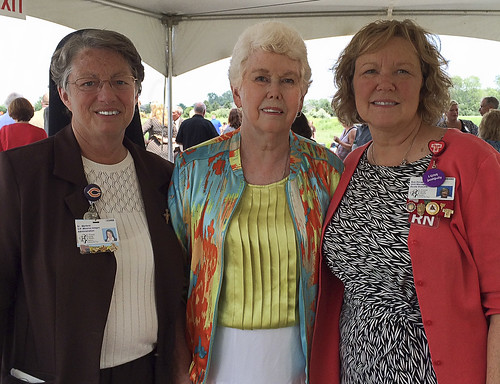 Franciscan St. Francis Health was holding its third annual ‘Mammothon’ in October 2013. Why not help raise funds for the Hospice House with a Scarf-a-thon? They would make lightweight scarves roiling with colorful ruffles.

The two women, joined by Douglas’ stepmother, got busy several months prior to the Mammothon. A Mammothon offers opportunity for busy women to schedule a convenient mammogram during the extended medical hours of 6:00 a.m. to 7:00 p.m.

Research indicates that nearly one-third of eligible women do not get mammograms, even though early detection can reduce breast cancer deaths by 30 percent. The Mammothons make it easy for women to get a test that has significantly improved the lives of thousands through early detection. Mammothons also give women who are a bit nervous about the screening a social setting, so they feel more comfortable with refreshments and door prizes available.

Special tables were set up at the fall event to sell the fluffy-looking scarves. The Oasis Gift Shop in the Cancer Center also sells the scarves. Between the October and May 2014 Mammothons, more than 700 flew out the doors.

Others are now involved in knitting or crocheting new scarves. An open invitation was extended for knitters to all employees. Twenty-four responded. “We provide the yarn. Then we teach them how to do it,” notes Sister Marlene. “One of the hospital housekeepers learned. At first, it was hard for her. Then she got it. She felt so proud!”

HOSPICE HOUSE TO OPEN
Hospice House broke ground in June and expects to offer full-time, holistic care by fall 2015. Features will include private rooms for patients and their families, a large common area and a prayer garden. It will be the only facility of its kind between the far north side of Indianapolis and Columbus, Indiana.

Sister Marlene is pleased because it is designed to look and feel like home. “We’ll have a chapel in the Hospice House,” she says. “The sacraments will be available.” Christ-like loving care will encompass the patients and their families.

The chapel will be available, as well, for use by ministers of other denominations. Funerals can also be held in the chapel. “Once someone has lived in the Hospice House for a time, it becomes home,” Sister says. “So having a funeral there can make sense.”

MATCHING GRANT
Eyes shining with joy, Sister Marlene announced that Franciscan Alliance awarded a grant of $10,655 to match what the knitters produced from the scarf sales.

Total gifts and pledges for Hospice House have brought the project close to its $10 million construction goal. A $2 million endowment will then be raised to sustain the House into the future.

You don’t have to wait for the next sale. The Oasis Gift Shop in the St. Francis Cancer Center has ready-for-purchase myriad summer-weight, stylish, colorful scarves.

October is Breast Cancer Awareness Month. Expect to hear about another Mammothon and, here on the south side, a Scarf-a-Thon.

Our Voice Heard Loud And Clear