Ladies of the Hard Court 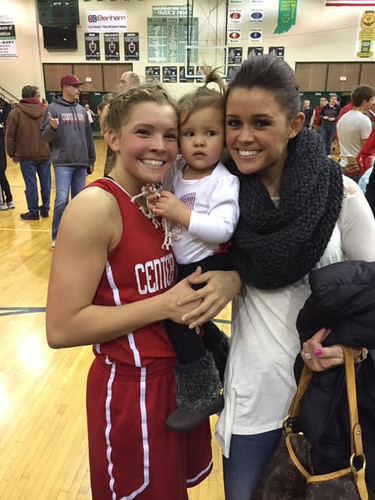 Behind every Center Grove High School team or club, there is a community. The community consists of the coach or leader, assisting staff, student athletes/participants, parents and fans. The coach with his or her staff, the students and the parents all bring a level commitment in making memorable and successful seasons.

The Lady Trojan basketball team is not any different from the other sports or clubs. They are a chosen family, brought together for four years by a sport and a team of girls that love it.

The girls’ basketball team is under the leadership of head coach Shawn Sanders. Coach Sanders is appreciative of the support that he receives from his parents. The support helps bring fun to the season and strengthens the basketball family.

One way that the team builds relationships is by having several gatherings for the girls and their families. While other teams may have dinners, the Lady Trojans have socials. The socials are gatherings filled with traditions that do not just consist of the athletes and parents but also all the coaches.

An example is the preseason social that serves as a meet and greet for the new season. It is a gathering of all teams which are the freshmen, junior varsity and varsity teams. The team gathers for socials to celebrate Christmas and the end of the season.

Sanders also expresses his appreciation of the support of the team parents, or Parent Club, because he is able to focus on his job of coaching. He states, “I am very satisfied with the help we get from our Parent Club. They meet regularly and looks for ways to help the coaching staff and me to focus on other things.”

It culminates especially when the basketball team celebrates a sectional championship with senior parents after the four years of working together with the common goal of successful and enjoyable seasons.

While Sanders fully appreciates the support of the parents, he does express a desire for an increased fan presence, specifically from the student body. Sanders states, “Girls’ sports in particular have a hard time drawing interest from the students.” Even with his hopes that student body support increases, he is grateful for the loyal fan base that never fails in showing pride in his team. 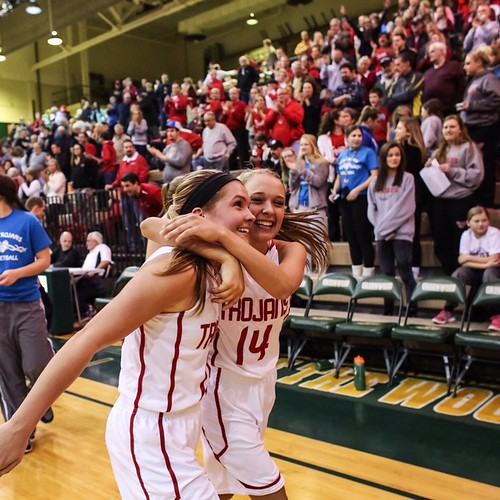 Kelli Luallen understands the foundation of the CGHS Women’s basketball team. Daughter Lauren Rau is a senior varsity player, while her older daughter Alex is a former player and former assistant coach. She even has the treasured memories of Lauren’s freshman season as daughter Alex was an assistant coach. “That season was so much fun for me as a mom watching two of my daughters involved in something they both love.”

Lauren committed earlier this year to play basketball at Lipscomb University. Luallen recalls that as Lauren began to first walk, she began to dribble a basketball as well. Playing at the collegiate level is a longtime dream coming true. “Every parent wants to see their child accomplish a tightly held goal,” Luallen reflects with pride.

With all of the years cheering for the Trojan Women’s basketball team, Luallen has a balanced perspective that all parents, of daughters particularly, should emulate. “Be a great listener and your daughter’s biggest fan. Most daughters are naturally very hard on themselves, especially at this level of play. I’ve encouraged all of my daughters to have a short memory where mistakes are concerned and to not stumble over something behind them. Tomorrow is a new day. I have found that encouragement and remaining positive goes a really long way!”

Who’s in Your Family Tree?