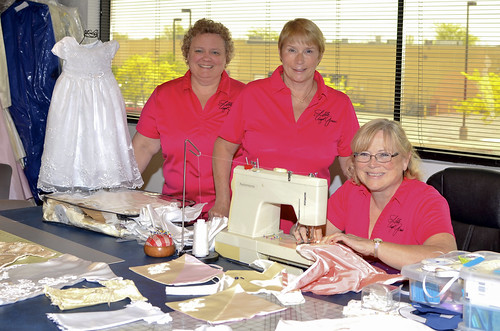 Tubes, pumps and plastic bassinets fill the room. Monitors serenade tiny ones fighting for life. When new life is lost, staff together with the families of those in Neonatal Intensive Care Units (NICU) struggle. Because burial gowns for stillborn and premature infants are commercially unavailable, Marie Murphy, a retired NICU nurse, wanted to help.

After reading about a similar group, Marie and her husband David began Little Angel Gowns (LAG) in April 2014. “My husband and I had always wanted to start a foundation, and we wanted to do this for our community. Its mission is to make burial gowns out of wedding dresses for babies that are called to their heavenly home.”

Marie is quick to mention she didn’t start this without help. Along with her cousin Sherry Wilkerson and Ardie Hinds, also a retired NICU nurse, she made the first gowns, completing 20 by June 1, 2014.

As word traveled, Murphy’s spare room was filled with completed gowns and 300 donated dresses. “The response has grown beyond my wildest dreams. Our volunteers are great. We wouldn’t be where we are without them. They sew and collect gowns and donations,” said Marie.

Response grew even more when they posted on Craig’s List, Facebook and Pinterest, asking for donated wedding dresses and volunteer seamstresses. In September 2014, they relocated to a business park on Indianapolis’ northwest side.

A group that began with three friends now totals 75 volunteers in eight states. Besides Indiana, chapters are in Michigan, New York, Tennessee, Iowa and Alabama where Marie and David now live. Volunteers have delivered over 700 burial gowns to individuals and major hospitals located in the metropolitan Indianapolis area. 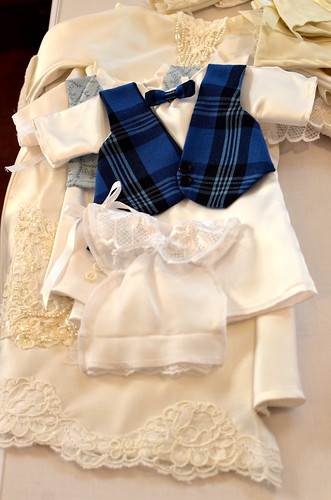 Generosity in a Moment of Sadness
Local volunteer Laura Combs became involved after watching an August 2014 newscast featuring Marie and LAG. “I was immediately touched by the kindness and generosity that LAG provided to families in a very sad moment following the loss of an infant child.” Laura wanted to help. To begin the process, Marie sent her patterns and instructions.

The following Sunday, Laura explained LAG’s purpose to women in Bargersville’s First Christian Church Sisters in Service group. Interest was contagious. Their first meeting was Friday, October 17, 2014, and to date, they have collected 16 donated dresses and completed over 60 garments.

“What I thought would be my mom, myself and my daughter working together to turn my wedding dress into LAG became a congregation supporting a new ministry.”

Most began sewing when they were 10 years old, so as a group, they average 52 years of seamstress experience. The youngest group member, Lindsey Combs, is learning from the others and enjoying her new skills.

Donating Dresses and Resources
Over 1,000 wedding dresses have been donated. “Don’t think your dress is not fancy enough. The dresses don’t need to have lots of embellishment because we can use them for boys or as a base,“ said Marie. She explained that 60 baby gowns can be made from one wedding dress, depending upon its style.

As an example, one simple wedding train provided enough material to make 30 Little Angel Gowns. Marie notes LAG accepts all dresses and formals. Ones they cannot use are sent to other charities such as Damar Homes, Lesley West Prom Dress Giveaway and similar projects.

Indiana has five LAG sewing groups including one through St. Francis Hospital, one in Noblesville and one in Bargersville. Marie emphasized that seamstresses don’t need to be affiliated with a group. They can call the office and ask for patterns. 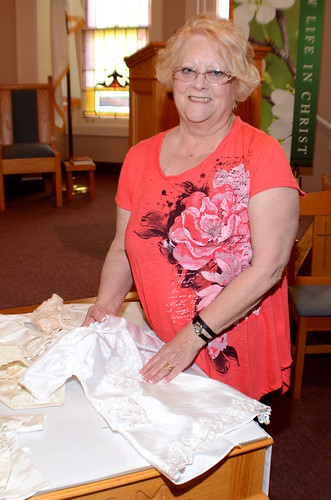 “However, we want them to follow our guidelines. Pastel colors like soft pinks and yellows should be used for the girls and black and navy blue for the boys,” said Marie. “We will send a packet to them.”

Donating wedding dresses and sewing gowns are not the only ways to help LAG. The foundation needs resources to pay rent and shipping costs. Fundraisers such as the “On the Wings of Angels” Charity Motorcycle Ride Saturday, July 25, and the Angels Gala in September generate financial support. Volunteers to help in the office and with inventory are also needed.

For more information about events and volunteering, visit littleangelgowns.org.

Marie explains requests for older children, those up to 10 years old, are now fulfilled with pediatric gowns or donated christening dresses. “The hardest thing you will ever have to do is to bury a child. If we don’t have something in stock, we will find something.”