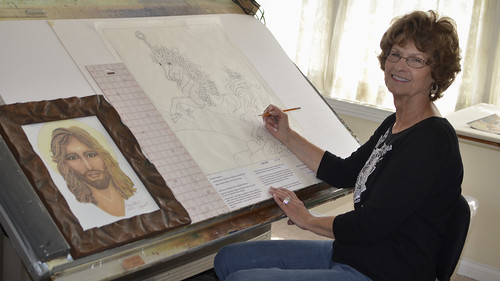 Perhaps you’ve heard of The Back Door, a local fabric haven frequented by quilters from all over the state. Maybe you’re aware that Indiana is known for its quilting guilds. But you may not know Mary Buvia, a local fabric artist who not only quilts but also designs each pattern and creates award-winning, intricate works of art. 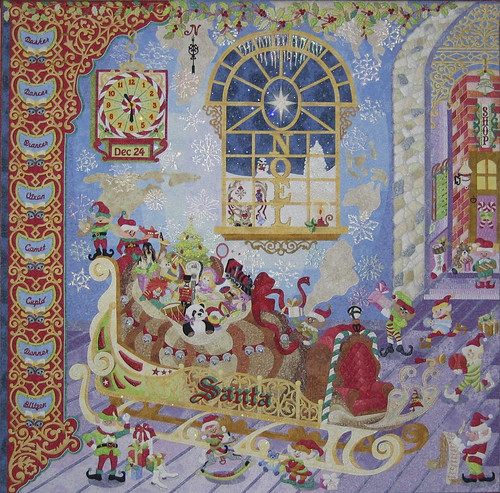 One of her most memorable achievements came in Sept. 2013 when she entered her whimsical Christmas design in an international competition with 1,524 art pieces from around the world. “That included bronze statues, pieces from driftwood — you name it, it was there,” said Mary. Santa’s Loading Dock quilt placed in the top 100.

Mary will receive the Lifetime Achievement Award given by the Indiana State Quilt Association on July 16. Another of Mary’s awards is the prestigious national Master Quilt Award given to only 31 people. She was the first to receive two of them: one for the Christmas quilt and the latest for her most recent quilt entitled He Who Guides Me.

Mary’s flare for fabric art began at age 7 after watching her grandma sew and explain her techniques. “From then forward, I knew I had to stitch together every thing that needle and thread could construct.” She began with doll clothes and then started making her own clothing when she was 10 years old. Her first coverlet was a bedspread, not a quilt. By age 18, she was sewing clothing for 20 people. Later as a mother, Mary made all of her daughter Sally’s clothes, including coats, hats, swimsuits, prom gowns and even undergarments until she was 18.

A Design Entrepreneur
In 1982, Mary opened her custom flag and banner business, Band Arts, which created flags and banners for high school bands in 15 states. As the business grew, it expanded commercially to include clients like the Indiana Pacers, Allison Transmission, Eli Lilly and even a drum corps in the Netherlands.

During this time, she met Robert Buvia, owner of Expo Design. In January 1991, they married, and soon their respective businesses occupied a five-acre complex at 5906 S. Harding St. Each year, they designed floats for the annual 500 Festival Parade and the Martin Luther King Jr. Parade in Atlanta. 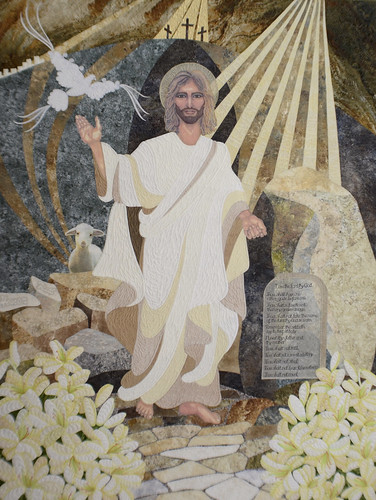 Together, Bob and Mary began visualizing their dream home. “It took us two years to design the house. We didn’t want a four-foot porch like everyone else, so we designed an eight-foot wide wraparound porch made of redwood, so no one would ever get splinters.” After 14 months of construction, builder Greg Allen completed their Innisbrooke home.

By 1995, Mary was ready to sell her custom flag and banner business. “The day after it sold, I decided to make my first quilt. My hand-quilted stitches were only one-fourth inch long, and the binding was about two inches wide. I still have this first quilt and love it!” She then decided to study books about quilting technique “to figure out how to really do this work.”

A Teacher and Lifelong Learner
Mary currently teaches at The Back Door three times a month where she encourages her quilting students to take risks. “If you don’t make mistakes, you won’t learn. You have to allow yourselves to do that. Never do we call ourselves ‘stupid.’” Her classes include Machine Quilting, an eight-hour session covering all the basics; Invisible Perfect Appliqué and Understanding Thread Choices. She also teaches local continuing studies classes and private lessons as well as judges quilt contests.

While designing and quilting keep her busy, Mary finds time to tour, lecture and offer weekend workshops. Now she limits these to 12 a year. “I almost killed myself doing too much in 2014. I only had four free days last October. I won’t do that again. What I want to do is make quilts,” said Mary.

Her latest quilt, He Who Guides Me, showcases her first portrait. Her subject? Jesus. Mary estimates it took about 20 different attempts to draw His face and two months to complete the pattern. This exquisite quilt also features Dupioni Silk. Its contest debut was the first weekend of March at the Indiana Heritage Quilt Show in Bloomington where it won Best of Show, Best Machine Quilting and first place. It has won several awards since.

“For every quilt I make, I create a new sewing technique. Each quilt is one of a kind,” said Mary. Former quilting student Becky Horton verifies the unique intricacy of each of Mary’s quilts: “These are not your grandmother’s patchwork quilts. They are works of art.”

The Art in Automobilia 2015