Mission to the Heart of Voodoo 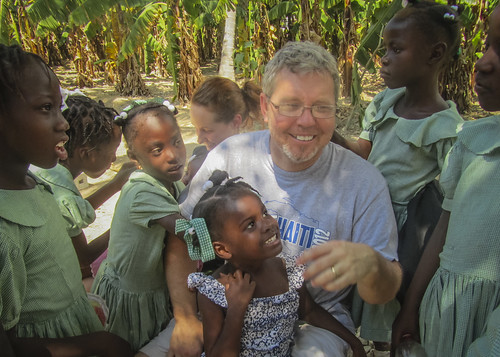 A Hot Wheel car and a piece of candy multiplied by 10,000 changed Frank Williams’ life. During his first mission trip to Haiti in December 1996, he accompanied a few others from his church to sponsor Christmas for Haiti. Their small group gave the children a portion of the 10,000 toys collected stateside.

One night while on their way to the orphanage, Frank rode with his best friend, Jeff Dahl, and his pastor. When the bus broke down, fear overtook him. “It’s pitch black in Haiti, the bus breaks down and I’m scared to death.” The pastor responded, “Frank, pray!” The bus started and ran long enough to reach their destination.

The second night at the orphanage, the mission team slept on a second floor open-air balcony. Jeff was awakened abruptly with a gun to his chin. One of the Haitian intruders then pistol-whipped him. Before anyone else could be manhandled, the potential thieves were spooked and jumped over the balcony.

“We had a decision to make. Do we pack up our bags and go back home, or do we stay? We chose to stay,” said Frank. Remaining meant Frank would soon call Haiti his second home. Since then, he has visited the country over 100 times, established a nonprofit organization, Sundouloi Ministries Incorporated (SMI), and built several churches, schools and an orphanage. SMI has also facilitated well-drilling, medical clinics and adult education programs. 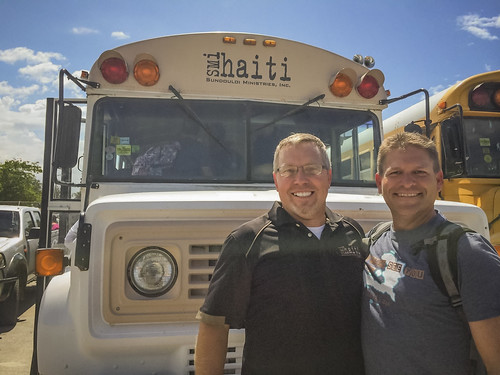 Sundouloi Ministries Incorporated
Started by Frank with the help of Jeff Dahl, Reverend Larry Poe and Kit Brunson in 2005, SMI can be translated from its Greek origin to mean “working together serving God.” Since Haiti’s 2010 earthquake, SMI estimates 400-500 volunteers per year have accompanied them to help the Haitian people. Their “Sundouloi” philosophy also applies cross-culturally.

“Our philosophy is not to go build in Haiti and hire Haitians to help us. However, we go to help Haitians build, and we help them. Instead of the Haitians bringing the building blocks to us, we bring the blocks to them,” said Frank. He also explained that foreigners often make the locals feel stupid if they do things differently. “What I’ve discovered over the 18 years of serving there is that we can learn from the Haitians.”

Guitton, located 35 miles north of the country’s capital, has become SMI’s primary location, but it was previously one of the country’s hubs for Voodoo worship. Frank explained Voodoo as “a religion of fear” that is both a culture and a way to worship.

“Our biggest battle in Haiti is when Haitians become Christian, they may incorporate it into their Voodoo culture,” said Frank. SMI combats this hybrid worship by building godly relationships, teaching the Bible and equipping pastors by using discipleship materials written by Dr. Charles Lake.

Voodoo, meaning “Divine Spirit,” originated in West Africa, notably Togo and Nigeria, and was transported to Haiti during the trans-Atlantic slave trade of the 1700s. Voodoo claims to be monotheistic. Haitians refer to God as “Bon Dieu,” translated as “Good God” or “Holy God.” However, Voodooists also summon spirits, especially during a healing service. Most villages have Voodoo priests who preside over these services. 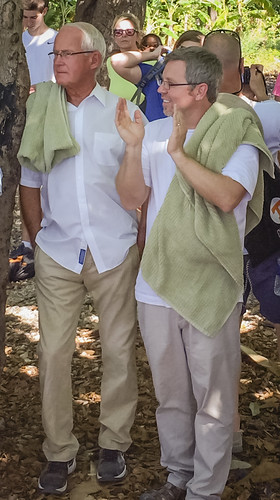 A Changed Village
The village of Guitton now leans toward Christianity primarily because SMI invested prayer, time and resources in it. “The original vision was to go to Guitton and start building a church,” said Frank. After they built the church, God moved SMI to begin constructing the Mission Home in 2004. Sammy, one of the children who received the Christmas toys in 1996, now runs this facility.

“After much trial and tribulation, we were able to complete it in late autumn 2009. We didn’t know the storm that was coming when we did that, but God did.” A few months later, the earthquake devastated Haiti, but the SMI Mission Home remained intact. Since the earthquake, hundreds of people have stayed at the home to bring hope to the country.

Two years ago, SMI began constructing a new church facility for the village of Guitton that holds 500. Frank and others visited this spring to celebrate the anniversary of its expansion. Along with hosting church services, the expanded facility also houses a school of 200 children, kindergarten through fifth grade.

SMI welcomes sponsors for these children. To sponsor a child for a year of schooling, $25 a month is required, which covers teachers, fees, uniforms, lunches and supplies. Frank beams when stating this school is consistently ranked as one of the best in that area. Visit smihaiti.org for more information about sponsorship.

Generosity Extended
In the last five years, two other new churches have been established — one in Nanwoch and the other in Kamitan close to Guitton. The latter leases property and worships under a tent. While church planting is the essence of SMI, another need has arisen in the last few years.

“In November 2012, we had a medical group desiring to go to Bon Repos, just outside of Port-au-Prince,” said Frank. “There the group wanted to treat children at an orphanage, but when we called, the orphanage kept saying ‘No.’” Moved by God’s spirit, the group decided to go to a nearby orphanage that needed help.

Sixty-four elementary-aged children, many orphaned by the 2010 earthquake, lived in a 700 square foot one-story structure. “These living conditions were the worst I’ve ever seen. The kids were stacked, taking turns sleeping on top of each other. When we arrived, the kids were singing. One girl began leading the children in this refrain: ‘Because He lives, I can face tomorrow.’ I sat there and balled my eyes out,” said Frank.

Within months, SMI purchased the entire property, and a 6,000 square foot, two-story building was completed in late 2014. The orphanage provides each child a new bed, three meals a day, medical care and schooling. The cost of supporting each child is $900 per year. Less than half of the children are sponsored. Frank’s friend and employer Ray Skillman, along with many others, helped finance the orphanage.

And to think all of this began with 10,000 Hot Wheel cars and pieces of candy along with several generous hearts.