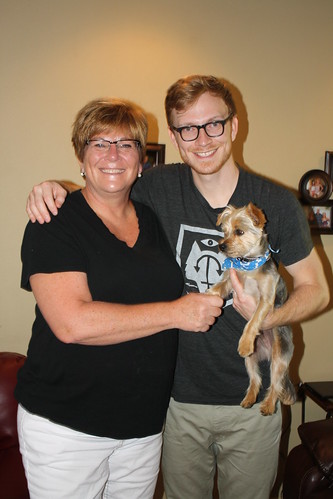 Twenty seven years ago, Center Grove resident Pam Rider gave her heart away: she placed her infant son up for adoption.

“Not a day has gone by that I haven’t thought of him,” Pam shared at a women’s conference in 2003. “Since having my girls, I have realized the ‘firsts’ I missed out on with my son. I wonder everyday if he has any similarities to me. Does he have a baritone or tenor voice? Is he a bookworm, athlete or both?”

We don’t often hear about a birth mother’s story in a closed adoption, nor do we hear of too many reunions. Yet, nearly three decades later, Pam and her son, Matthew Johnson, reunite and claim 2014 as a year of “firsts.”

Last December at a tearoom in St. Petersburg, Florida, the mother and son reunited for the first time. Pam admits she was a nervous wreck. It had been raining all day and as Pam and her husband, Steve, pulled up to the tearoom, many people lingered under the awning’s entrance. In the midst of the packed gathering stood Mathew.

“We were both smiling,” said Pam. “My four-foot walk toward him seemed like forever. All I wanted to do was touch him—his face, his hair, his hands. Matter of fact, the first sentence I said to Matthew declared that his ears looked the same as mine. Looking back, that was kind of awkward.”

Matthew later stated the moment for him was surreal. “Here were all these people under the awning, but I only saw my birth mom. It was like all the other people just disappeared from my sight.”

Future Questioned
During her senior year at a small Christian college in Tennessee, the 22-year-old Pam realized she was pregnant. In a single second, her life changed forever. She would not abort the child, but she didn’t have the means to take care of him either. Unsure of what to do, a friend who lived in St. Petersburg offered Pam a place to stay after graduation.

“Even though I had turned my back on God at the time,” she said. “He took care of every provision. In St. Pete, a minister knew of a couple ready to adopt a second baby. The minister’s church provided everything I needed—the adoption lawyer, doctors and a job.”

The birth of her son came on October 25, 1987. The closed adoption that followed would not allow Pam contact with her son until he turned 18. The only information she obtained in the hospital was the adopted parents, Jack and Linda, had named the baby Matthew. 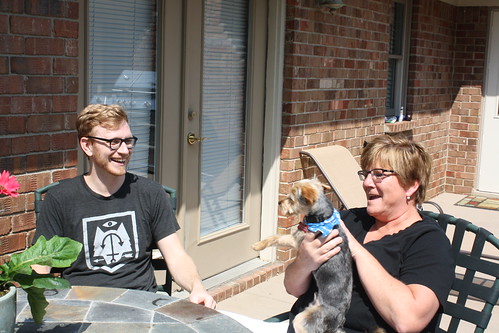 Searching
As Matthew’s 18th birthday drew near, Pam realized Matthew could legally reach out to her soon. Preparing for that possibility, Pam contacted the adoption attorney to confirm her present contact information. During the conversation, the attorney inadvertently said her son’s last name—Johnson.

As the years drifted by and no word from Matthew, Pam began exploring the internet for him. With little information, she searched Facebook in attempts to find her son. In November 2012, after countless attempts to find him, a Matthew Johnson, who had a strong resemblance to Pam, appeared on the screen. Sending a friend request, Pam asked if Matthew had been adopted. Because Pam was not in Matthew’s friend list, her message was placed in the “other” folder, which Facebook users rarely check. Consequently, Matthew didn’t see Pam’s request until a year later.

New Season
According to Matthew, his father had told him long ago about his birth mother’s circumstances at the time of adoption. Matthew grew up with no animosity toward his birth parents.

“I have parents who brought me up in a loving and nurturing environment,” said Matthew. “I love them and they love me.”

Matthew discovered Pam’s Facebook request during a new season of his life.

“I had just moved into my new apartment and finally had a chance to relax when I saw her friend request in my ‘other’ folder,” said Matthew. “It’s weird because when I received the friend request, I was in a place in life where I felt ready to meet her.”

Meeting Family
At their first meeting, Matthew gave Pam a memory book overflowing with moments he cherished from his past. The written pages and pictures within the book’s spine has become a treasure to Pam, which shows Matthew’s early zest for music, movies, friends, family, school and church.

“The book shows the nurturing Matthew received, and how it shaped the young man I want to get to know,” Pam said. “The book is priceless to me!”

Both Pam and Matthew place the past in the past, and are moving forward to build common “firsts” between them. Two of the most important firsts were to meet the Pam’s two daughters. During spring break of 2014, the Riders brought their youngest daughter, Nicole, to Florida to meet Matthew. While a visit to Indiana last July gave Matthew the opportunity to meet the Riders’ first daughter, Kristen. 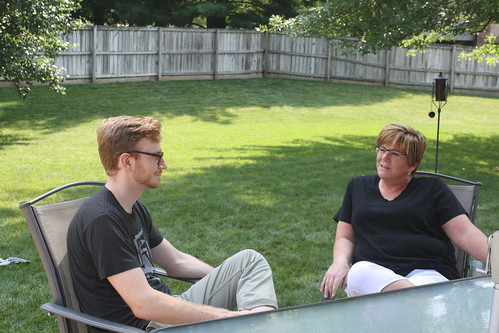 New Moments
Filled with friends, family and road trips, Matthew’s time in Indiana offered a chance to share new moments. For instance, Pam learned Matthew has an eye for detail. During a trip to the Indianapolis Soldiers’ and Sailors’ Monument, Matthew pointed out the intricate detail on the eight stone eagles supporting the capital, which also includes a turret to support the Victory statue.

“I had not even noticed that before,” said Pam.

They both shared a laugh when Matthew brought up the Indianapolis Art Museum trip.

“I like to really look at the paintings,” Matthew said, with a grin.

“Yes,” said Pam laughing. “So much of my attention deficit kicked in and the time became, let’s just say, very interesting.”

Pam, along with friends and family, has noticed similarities between the mother and son (besides having the same ear structure). They both share the same smile, quick wit, curiosity and zest for life.

Birthday Celebrated
In mid-October, the Rider family celebrated Matthew’s birthday with a trip to Chicago.

“In the past, October 25th was always a sad day for me,” said Pam. “I only saw a glimpse of my son when he was born, but that glimpse left a big hole of emotions in my heart. This year we celebrated his first birthday! The first birthday of many years to come.”

Picture This: Secret Lessons from My Camera