One for the Ages

“The Perfection.” That’s how Center Grove High School head football coach Eric Moore describes the Trojans’ 2015 undefeated 14-0 season. Coach Moore’s team had its most historic season ever: winning the IHSAA Class 6A State Title, winning the powerful Metropolitan Interscholastic Conference Championship, securing the number-one ranking in the state and rising into the top 10 in the national polls. 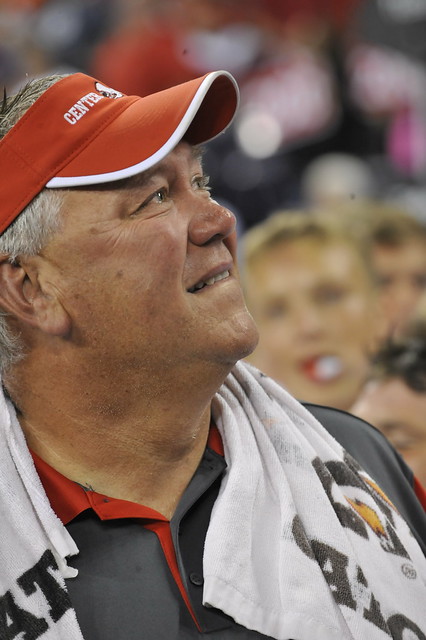 The magnitude of what the Trojans accomplished on the gridiron this past season is not lost on the veteran coach. “Capping everything off with an undefeated season with a state championship, you just don’t write stuff like that. You never write that on a goal board. Everybody wants to be undefeated state champions.”

Senior Strong
It’s clear that the credit for the Trojans’ amazing season is shared among many, but Coach gives most of the credit to his seniors. “Even though we have 100 kids on the football team, we don’t really have 100 players, so you turn your attention to the senior class. To see what 36 kids [seniors] accomplished is a tremendous task. Your season starts. You go over and beat Warren Central at home. What a way to start a season!

Center Grove had seven seniors start and help anchor the defense, which was rated one of the best in the nation. All-American linemen Jovan Swann and Cameron Tidd led the way, creating havoc for opposing offenses.

“The highlight show” is Coach Moore’s nickname for Swann. “He has a big heart. He loves Center Grove football. He loves his teammates. Traits he brings to the field: great surge up the field pass rush, big long arms to knock balls down. He’s an excellent student, character, role model. He’s a great leader. The kids followed him. They all believed in everything he said and did. He believed we could win. He’s an All-American.” Swann has verbally committed to play college football at Stanford. 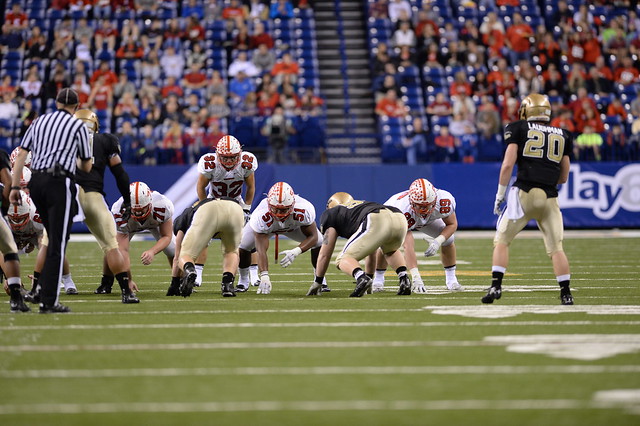 strength. “Not much comes out of his mouth. Positive always. He’s a winner. He’s stoic. He never gets too high or too low. He did his job. High character. Just a champion.” Tidd was also a state champ during the spring 2015 track and field season with a school record throw in the discus.
But the depth of the Trojans extended well beyond Swann and Tidd. Coach Moore had a smile as he described the strengths of his seniors:

Blake Moran, Cornerback: “He’s very tall, very athletic. He’s a hurdler in track as well. He would go up and catch the ball. He had an interception or two. His open-field tackling was an improvement more than anyone in our program. He carries himself well and is a fine young man.”

Tyler Pence, Cornerback: “Voted by our kids as the most improved defensive player. He’s a ballplayer. He knows how to play football. He made some key interceptions. His open field tackling was unbelievable. It was good enough to be recognized as all-state. Very proud of his effort, and hopefully he’ll continue to play college football.”

Connor Steeb, Safety: “Anything that came from the back end physically was Connor Steeb. He looks like he plays. He’s muscular. He’s tough. He’s fast. And he’ll hit you. He 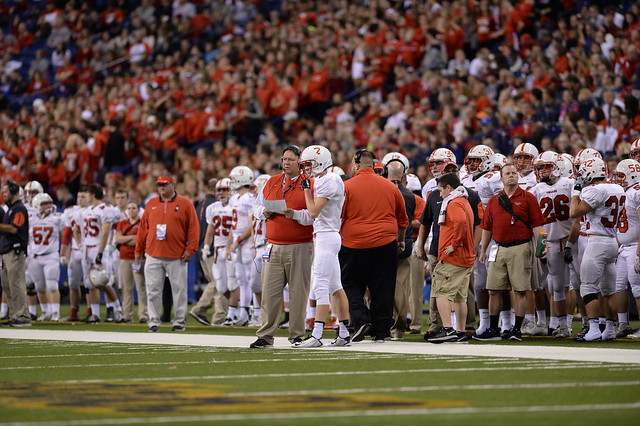 really pounded some people this year. He’ll go to college and play Division II or III football. An excellent student-athlete. He’s a champion on the field as far as attitude and commitment.”

Jackson Sodrel, Linebacker and Defensive Captain: “The heart of the defense. He was a two-year starter, three-year player. Good speed. Excellent athleticism. Unbelievable hands. Understood the game. He breaks his leg in game nine. Got back on the field for the state championship game. It did my heart good to see your captain of your team run around out there with his team.”

Will Smithey, Defensive Back and Punt Returner: “Punt returns – solid hands. He was like the duct tape on defense in the secondary. He can play any of those spots. For the first time, we had a kid that would stop punts, catch punts. He really kept the field position turned upside down for the offense. Will is a spectacular baseball player as well as over a 4.0 student. He’s going to play college baseball somewhere.”

Joey Siderewicz, Quarterback and Offensive Captain: “This kid loves football. Joey knew his job and role every day: Help us win; don’t try to do things you can’t do; keep plays alive; be smart; and control the football game. He just did that for so long. His team leadership, his focus, he’s a champion and broke some [school] records. He’s probably going to a Division III school to play football. I think he’ll have a great college career as well.”

Zak Smith, Split End: “Zak might be the most improved player. Fast as a cat, great speed, great track kid. Going to college and will probably run track. He’s the true student-athlete. Good character role model. Hard worker. First game of the season [at Warren Central], fourth and 17, he catches a ball going across the field and makes the play, which puts us in position to score and win the game.” 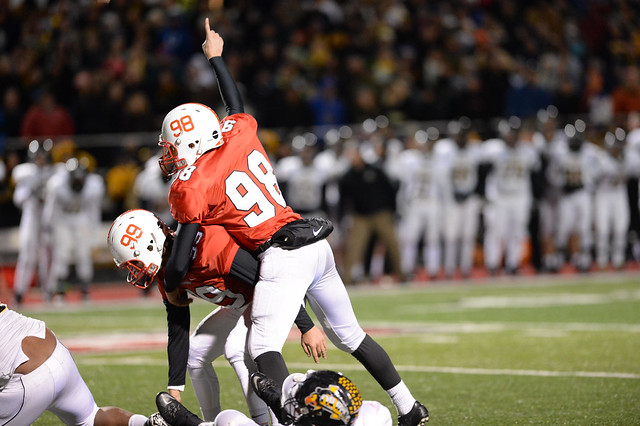 Quinton Stirsman, Split End: “Quinton didn’t have great size, didn’t have the great total speed as Zak Smith, but he has great possession hands. Avon game fourth down conversion. He was phenomenal all year. If we had to make a play, Quinton seemed to stand up and make the play for us catching the football.”

Jackson Hohlt, Running Back: “Wow! What a competitor. What a young man. What a character role model. He’s already committed to West Point. He is a soldier. He does everything you ask and never asks a question. Never makes a mental mistake. It’s always about the team. A very versatile player. I know we don’t have anyone in the program as committed to excellence as much as he is.”

Lee Clinker, Running Back: “Had his best game in the state championship game. He took a sweep 25-30 yards. Good student, excellent role model. High contributor to our offense.”

John Richardson, Offensive Lineman: “Homeschooled a couple of years, then chose to come to this school as a junior. Our only senior offensive lineman that started every game. Did a great job. Great size. Great feet. Really moves well for a 300-pound kid. He may go to a Division I school like the MAC conference or a Division II school.” seemed like everybody would get on Chris, and he could deal with it. He was able to share it with his teammates on how to do better. His attitude was awesome. He just did a great job.”

Harrison Holt, Offensive Lineman: “Harrison Holt was our duct tape on offense. He was the ultimate backup. A little small in nature, but great heart. Excellent student. Excellent role model.”

Jerod Hopson, Offensive Lineman: “Hoppy stood around out there injured for two years. He never gave up. The tribute to him was to put him on the 75-man dress list [for the state championship game]. He wasn’t ready to play, but he deserved it for being there every day for four straight years never missing a practice. Being able to send him out there to take that last snap is awesome. It really pulled on my heart.”

Jacob Limbach, Long Snapper: “Maybe one of the best stories in our program. When everyone is taking a break, he’s snapping into targets. He may have had one poor snap all year long in over 70 snaps.”

Nate Snyder, Kicker: “Snyder is crazy and full of energy. He was a great distance kicker. Very precise on field goals. Could kick the long field goals. Got a real shot in college to continue to do that.”

“The snapper, the punter and kicker probably worked harder than any three I’ve ever had at their spot, so when we go out there, we can punt 45 yards; we can kick off to the end zone, and we don’t have to worry about snaps. Our special teams were phenomenal because of that.”

The Perfection
While the players may not truly understand what they’ve accomplished, Coach Moore encouraged them to take it all in. “For 33 years, I’ve been involved in high school football, and I came close a lot of times, probably nine, 10 times, but never was able to get over the hump and really complete ‘the perfection’ that we call it.

“Thinking back on it now, you really start to appreciate the blue medal the kids got and the rings the kids ordered and the plaques that say ‘Undefeated’ on them and all the articles written about them. It’s very much deserved. Is it a little bit overkill? No, it’s not. It’s never happened here before.”