Robotics on the Rise in Center Grove Schools 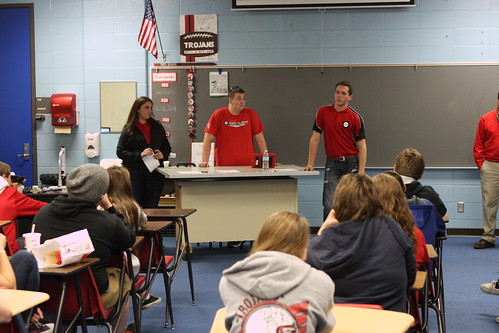 Last season, Red Alert Robotics made Center Grove proud by winning a State Championship in Elkhart. That’s quite an accomplishment considering the school district didn’t have a team 10 years ago. In that time, the team has won prestigious awards at regional competitions in Maryland, Cincinnati and at Purdue University. Red Alert also advanced to the FIRST Robotics World Championships four times.

Every January, high school students receive a game scenario and specifications on the type of robot they need to build to compete against other teams. In the past, robots have tossed Frisbees and shot basketballs.

“It is fun building the robot and putting engineering skills to use at competitions,” said Engineering Captain Tyler Ray, a Center Grove senior.

More than engineers
The team also has many non-engineering students that do everything from writing a business plan to creating videos to community outreach.

“Our non-engineering members give presentations to sponsors like Endress+Hauser and Cummins Engine,” said Operations Captain Hailey Rose, a Center Grove senior. “It’s helping me to prepare for a college degree in business administration.”

Robotics is paying off for Center Grove alumni. Students are earning scholarships and attending schools such as Rose Hulman, Purdue, University of Chicago and University of Cincinnati. Last season’s team captain Mariah Smith received an engineering scholarship from Purdue. Charlie Baxter, also a Center Grove and Purdue graduate, is now a research engineer at MED Institute and holds two patents for medical devices.

It all starts with kids who are interested in technology. Students in middle school build Lego robots as part of FIRST Robotics Lego League or FLL. Elementary students, who also build Lego robots, are part of Jr. FLL. The days of just studying from books are long gone. These bright minds are poised for greatness.

So where does the money come from to operate all these robotics teams? Students pay a registration fee to participate and travel. However, boosters and sponsors foot much of the bill to purchase robot parts, equipment and book hotels and tour buses.

“We are fortunate to have sponsors like Rolls Royce and Endress+Hauser, but based on our growth, we would appreciate additional sponsors,” said Bert Bentson, Red Alert’s corporate fundraising officer.

Expanding program, expanding needs
Money is critical for the future of the high school team, as it is projected to grow to well over 100 students in the next couple of years.

“We need much more space to put our students, volunteer mentors and the robot practice field,” said Rich Thielmeyer, senior mentor with Red Alert, who works for Cummins.

Fortunately, the school corporation found a short-term solution. The team set up its practice field each night in the gym at the Professional Resource Center (PRC), the former Maple Grove school building.

“We are grateful the school provided this temporary space to operate,” said Team Captain Tommy Ramirez, a senior at Center Grove. “It’s desperately needed to test our robots and practice for competitions.”

However, the team shares the gym space with the developmental preschool and daycare, meaning the practice field has to be taken down every night and set back up after school lets out.

At the August school board meeting, Superintendent Richard Arkanoff and several school board members stated how pleased they are with the team and its success. Arkanoff reported to the board that the school has adapted to help the team’s growth in the short-term but he also made an appeal for board and community support in developing a long-term solution that could include new construction.

“There are two questions when it comes to STEM (science, technology, engineering, math). The first is where is the curriculum piece in this so that it makes sense? The second, where is the facility piece in all this because there are facility needs in such programs like robotics,” said Arkanoff.

“I shared information with the school board about a facility in Texas, which is a real good concept of a STEM building. I’m also reviewing robotics facilities in Denver and California,” he said.

School board members agreed that whatever Center Grove does for robotics, it must be top-tier.

“If we are going to be a world class organization, we need to do better than what other area schools are doing. This is an exciting time for us to be seen as leaders,” said Scott Alexander, school board president.

Board member Rob Richards expressed the need for help from the corporate world.

“I want to do it right the first time,” said Richards. “If we do it piecemeal, I’m worried it’ll take longer to get what we really need. For the dollars needed to do it right, we need to get on board with some major corporations and we need a grant czar to get into the government’s back pocket.”

“This is a big leap but something we want to be in the forefront on. This is one of the pieces we need to be a top school system,” said Tumey.

Motioning to the school corporation’s curriculum director, school board secretary Adam Norman explained the importance of developing a robust program.

“Figure out a way to make this part of the curriculum and make it stand out,” said Norman. “People say Center Grove has peaked. This (robotics) team is an example that shows we have not peaked and we are doing more with technology. I want to see it become more than a club, something academic and rigorous.” 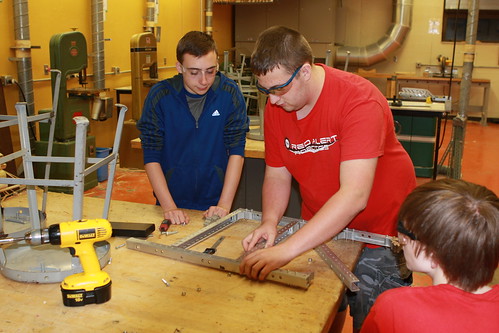 A natural extension
With an existing engineering program at the high school, adding robotics to the curriculum makes perfect sense. In the meantime, robotics students rely heavily on volunteer mentors who have day jobs and can only meet for practice at night. Offering robotics classes during school hours taught by school instructors will benefit students who cannot meet at night or might not be able to afford the full travel team program. Curriculum development is also the next step in changing the “club” status of the robotics program to “team.” It might say “club” on paper but in reality, nearly 100 students traveling on buses to multiple competitions per year is much more than a small club that meets for a short time after school.

The team’s board of directors has agreed to help the school corporation and education foundation raise funds for a specialized facility, whether that’s retrofitting an existing structure or new construction. A sponsorship similar to the school’s partnership with IU Health is the preferred avenue. An anchor sponsor with an interest in STEM students can place its name on the side of a robotics building and get years of recognition with all the tournaments hosted there. Will it be one of the team’s current partners like Rolls Royce, Endress+Hauser or Cummins, or will another local corporation step up?

If you want to see robots in action, Center Grove’s junior varsity team is hosting a state qualifying tournament Saturday, November 22 at Middle School North. It’s free and open to the public. The varsity team will compete at district and state events in the Indianapolis area beginning in late February.

To find out how you can donate to the team and to see where they will be next, check the team’s website, RedAlert1741.org.

Praise Acres – A Place to Pause