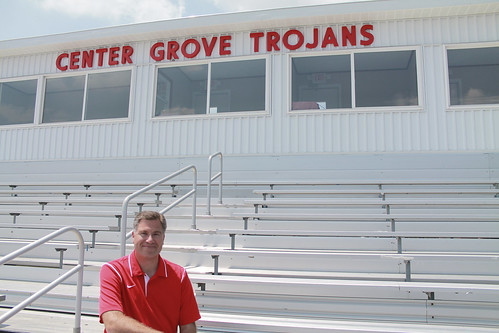 Webcasts Are a Hit on Center Grove Sports Network

For football and basketball fans, nothing beats watching the game in person. Sitting among a crowd decked out in your team’s colors, cheering as the players charge onto the field or the floor, and convincing yourself that a bag of popcorn is a perfectly acceptable dinner are what sporting events are all about. But thanks to Kevin Conrad, Center Grove fans have the next-best option for nights when being in the stands just isn’t possible: Since 2008, Conrad and a team of four sports-minded friends have broadcast the Trojans’ football and boys’ basketball games live online, via the Center Grove Sports Network.

A quick glance at the website’s collection of archived football game videos, audio from the basketball games, highlights, schedules and photos, displays the time and effort it takes to follow two teams’ every move. So what made Conrad, a married father of three boys, and with a full-time job, start spending each Friday night in autumn and half the winter behind a camera or audio board? “I looked at CGHS and the conference they play in—it’s an elite conference—and most of the schools had some sort of coverage, and Center Grove didn’t,” Conrad recalls. “So I approached the athletic director, Jon Zwitt, and said I had the know-how to do a live webcast of the games, and asked if it would be OK. He said, ‘Sounds great; go for it.’”

Conrad launched the website in February of 2008 with boys’ basketball audio webcasts; the Gridiron Club then generated sponsorship dollars and hired him to add video webcasts of the football games that fall. (He hasn’t missed a single football game in six years.) He soon enlisted Rick Sauter, whom he met while the two were coaching the Center Grove Boys’ Basketball League, as the main color commentator for the basketball games. “It’s been fun to see the kids come up through the program,” says Sauter, a former CGHS basketball player.

Locals Rick Embrey and Beau Barrett were also ideal additions to the network team as heads of Center Grove’s recreational boys’ basketball league and bantam football team, respectively. Both fill in occasionally during basketball season, and Embrey is Conrad’s spotter, statistician and postgame show analyst at football games. Ted Kitchel of IU’s famed national championship team rounds out the network’s on-camera personalities. The Indiana Basketball Hall of Famer brings his experience as a former Channel 4 IU basketball analyst to the Trojan’s football games, acting as a color commentator since 2009. 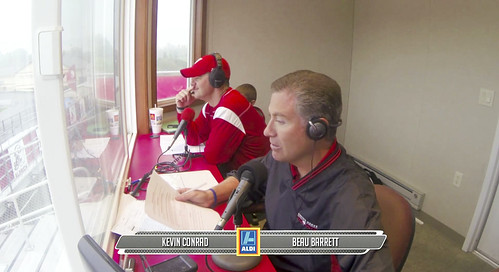 Conrad also had plenty of practice analyzing games and calling plays, thanks to his previous experience in broadcasting. The Franklin Central High School alum got his start broadcasting football and basketball games on the school’s 91.5 FM radio station, then continued his on-air path at the University of Indianapolis on WICR. “I did radio professionally out of college for a few years,” Conrad says, “but when it came to covering the Center Grove games, I didn’t have the means. No radio station, no TV station.” That’s where another Center Grove local, Matt Murray, stepped in. The owner of New Five Creative, a Greenwood-based creative and development company, the CGHS alum is a pro at website design and video production. Murray takes care of the audio-video streaming and on-screen graphics for the football webcasts and produces the coach’s show Conrad records once a month during basketball season.

At first, Conrad also tried to cover baseball and softball games, but time constraints forced him to cut back. “I don’t have time to do across-the-board webcasts,” he explains, “but I do include the scores and schedules and some highlights from the varsity events. Many of the photos are contributed from moms and dads in the community, so the website has a community feel from that standpoint. There are always the team parents who take many pictures, so I’ll connect with them and get their photos. That way I can cover more sports.” Two exceptions were in 2011 and 2012, when Conrad hosted the Center Grove Sports Show and featured the boys’ track and field state championship team, followed by the wrestling team with state champion Sean Mappes.

Although the time put into covering the high school’s sporting events through the website, webcasts, and social media (the Twitter handle @CGSportsNetwork has more than 800 followers) can be overwhelming, Conrad says there have been some glorious highlights as compensation. For one, the “neat honor” of webcasting the 2008 Center Grove football state championship win over Carmel from Lucas Oil Stadium. He was also there for the 2009 softball state championship, as well as the 2011 boys’ basketball regional game, played at Hinkle Fieldhouse.

If Conrad ever had doubts that his website was actually reaching sports fans, the 2012 regional football game against Evansville’s Castle High School put those questions to rest. “I was told that on that night, we were generating anywhere from 8,000 to 10,000 clicks,” he says.

The network has even trickled down to the up-and-comers. Conrad has been hired to do webcasts for the bantam football team and the basketball league, and in June Conrad broadcast two little league games for the first time. However, most importantly, those who can’t be at the games in person are now able to get a front row seat, no matter where they are. Conrad has heard accounts of the webcasts being picked up by military dads stationed overseas, as well as plenty of alumni and players’ family members who log on Friday nights to watch or listen to the Trojans play. “It’s truly a labor of love for me,” Conrad says. “I love sports, and we have a great community here in Center Grove.”

Will Kindergarten Challenge My Child?