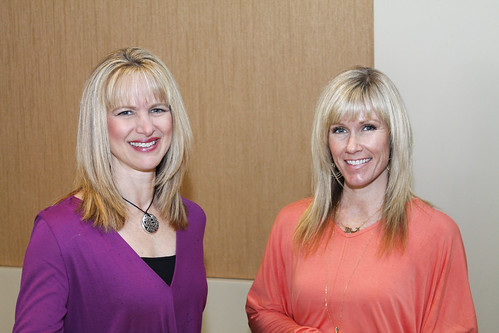 When Kim Tabor and Stefanie Jeffers asked hundreds of Facebook friends to like their new page, Stripped Free, a few might have hesitated, thinking, “What is this?” Launched officially in April 2014, this branch of Finally Free Women’s Ministry began reaching out to women in strip clubs. A curious crowd responded — almost immediately.

When Kim blogged about visiting a strip club, her normal readership of 50 became 300. Then a few hours later, the blog went viral. “Within 24 hours, we had 5,000 readers,” said Kim. Posted March 11, 2014, on taborministries.org, “You’re Doing What?” explained why Kim and Stefanie felt called to build relationships with women in local strip clubs.

For Stefanie, it was personal. She had worked at one of the clubs during an especially difficult time in her life. “I lost everything in the three years I worked there — my house, my daughter. What made me decide to leave is that I honestly couldn’t take it anymore. It’s hard on your heart, your soul and your body. It’s not glamorous at all.”

Stefanie returned to her faith, which led to teaching a home Bible study for women where they could feel safe to be themselves. One evening Kim presented information about Tabor Ministries’ Finally Free Conference. Afterward Stefanie shared her story. They soon became friends and the idea of reaching out to women in Indianapolis strip clubs was born.

Kim and Stefanie, along with a few other women, visit four clubs a month. While the environment can be dark, loud and unsettling, there is time for mingling, gift giving and conversation with both the dancers and staff. One week they visit a club Wednesday, 1-3 p.m. The following week they visit another club Thursday, 6:30-8:30 p.m. The cycle repeats. During these outreaches, volunteers gather to pray at Mount Pleasant Christian Church. Many provide gifts for baskets that may include scarves, bracelets, baked goods, $5 Starbucks cards, candles and lotions.

“We don’t bring them gifts that are hand-me-downs. We want to lavish them,” said Kim. Stefanie added, “I think every gift is a gateway to show them that nothing is expected of them. We just love them like God does.”

When Stefanie visited one of the dancer’s homes, she saw how important these gifts are. The girl had displayed each gift from the bags on shelves and often told her, “I’ve never met anyone like you before.” Building that relationship and trust is vital to being allowed to assist them in making better choices. Unconditional love is often foreign to these women.

The women and their families are invited to two major events sponsored by the Stripped Free Ministry — a back -to-school drive and a Christmas shopping event. Kim and Stefanie note most of the women have multiple children with no involvement from the fathers. One girl supports her two children along with a niece and a disabled mother. “There’s a reality that keeps them there. They make money that they couldn’t make anywhere else,” said Stefanie, emphasizing that most struggle to pay bills.

Last year’s back-to-school drive took place in one of the club’s parking lots with approximately 50 women along with their children attending. Donations included lunch boxes, new backpacks and various school supplies. Besides individual support, The Good Samaritan Network of Fishers, Teachers’ Treasures and the Officer David Moore Food Pantry donated to this drive. Hosted in a hotel banquet room, the Christmas shopping event provided donations including hams, floral arrangements and children’s gifts. Throughout the year smaller events occur, such as the two baby showers recently planned.

Members of Stefanie’s church in Fishers, Heartland, and Kim’s in Greenwood, Mount Pleasant Christian Church, also are involved in this ministry. Kristen Lyons leads the prayer team that meets during the monthly outreaches. “What has surprised me is how much I’ve fallen in love with the girls whose names are on the paper and with their stories,” said Kristen. 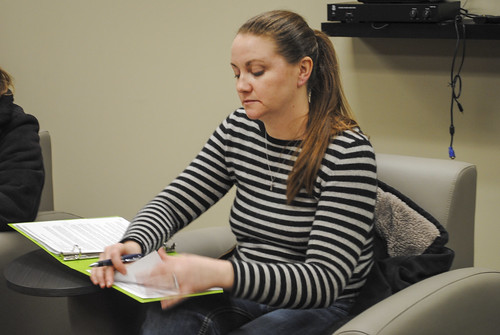 “My whole perspective has changed on women in general. I now have compassion for people I don’t even know,” said Amy Burchett, another member of the team.

Sarah Records, who has visited the clubs with Kim and Stefanie, added, “It’s something I’ve never experienced before. It’s almost like we have blinders on to everything going around us.”

Nicole Jonas noted, “Being involved with the prayer group and gifts, I’m much more aware. It’s opened my eyes to how this industry is everywhere.”

Not only does this month mark Stripped Free’s anniversary, but also is meaningful to two former strippers who decided to leave their clubs a year ago. Both have new jobs and regularly attend church. Two others have left the industry and are in transition. Stefanie and Kim have become their friends and accountability partners. Stefanie frequently carves out time to meet with some of the ladies. “These are not just women whom we see, but whom we love. They’ve become like family to us.”

To educate others, Kim and Stefanie speak to men and women’s groups because misconceptions exist regarding strippers. “I’ve never met one who would have dreamed of becoming a stripper,” said Kim. “Most of these women suffer domestic abuse.” They teach the dancers to make better choices regarding all facets of their lives, including relationships and finances. “With most, we’re really starting at square one,” said Kim.

Kim and Stefanie realize they need help with this endeavor. “It’s not a cheap thing to transition a woman out of the sex industry. Many don’t even have cars,” said Stefanie.

“And they’ve grown very comfortable in the darkness.” To help with bills during their transition out of the clubs to another job, they need about $2,500 per woman.

The ministry has developed monthly partnerships where people can donate money that provides gifts for the club outreaches, scholarships for those transitioning and financial support for events. Anyone can participate at taborministries.org/tm-kingdom-fund.

“If there are some stores we could partner with for the women’s gifts, that would be phenomenal,” said Kim. Anyone wanting to donate vehicles should contact Kim at info@taborministries.org. Their mega-dream for Stripped Free is to provide a house for those transitioning.

When asked what she learned during Stripped Free’s first year, Stefanie didn’t hesitate. “To keep our eyes on Jesus. While that’s hard, it’s worth it.”

Kim has realized women share common needs like community and unconditional love. “There are so many people who have nobody. I’m also learning that women who work in these places are not that different from women in the church or myself,” said Kim.

Kim and Stefanie agree that ministering to women who work in strip clubs is fulfilling but can also be “messy, scary and dark.” Nevertheless, they are committed to helping them leave the sex industry. “We will journey with them. If they want to run, we’ll run. If they want to walk, we’ll walk. If they stop, we’ll stop and wait for them,” said Stefanie. “We want them to know they are loved and they matter.”