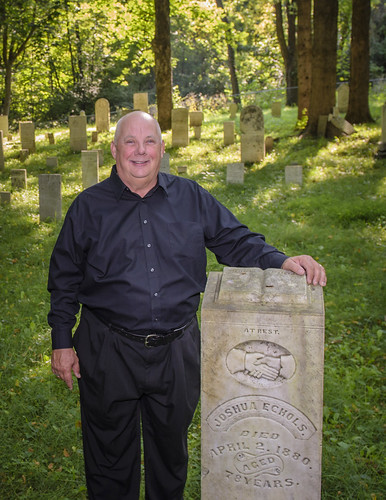 Many Center Grove residents may not realize that nestled close to housing developments and commercial expansions, there are six local parcels of land with a rich history. These tracts are the final resting places of pioneers, the founding families of Johnson County. Many of the interred are also the ancestors of people who still live in the area. The care of these cemeteries is under the care of White River Township Trustee Mark Messick.

Several years ago, the Indiana State Legislature realized that abandoned cemeteries were in bad condition, and city growth was threatening their existence. They are located on pieces of land that no one claims to own and for which no taxes are collected. A law was passed to ensure that any lost burial ground that had existed since 1939 would be preserved. As a result, it is a Township Trustee’s responsibility to retain the grounds and surrounding fences of these plots as well as righting or replacing headstones as they fall into disrepair.

During the time he has overseen the upkeep of the cemeteries, Messick has enjoyed becoming familiar with the lore behind the headstones. He recommends two resources available for historic information. There is a direct link to the website findagrave.com on the White River Township Trustee website, whiterivertownship.org/cemeteries. It records all interments and includes photos provided by volunteers of many headstones. The second source of information is a Google digitized book written in 1881, “A Historical Sketch of Johnson County” by D. D. (David Demaree) Banta. 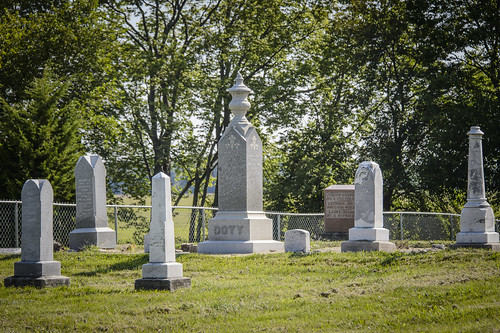 Bargersville Cemetery, CR 300 near the Bargersville Flea Market
The Bargersville Cemetery is the southernmost pioneer burial ground in the township, and many of its 108 headstones bear the name of Doty. John Doty arrived from West Virginia in May 1821 and settled in an area that became known as Doty Hill. According to the Banta book mentioned above, Doty and his large family exemplified the hardworking pioneer spirit that tamed the area. It is said that his son George Doty killed 300 deer during their first year in the area, but unfortunately squirrels and raccoons ate every bit of corn they managed to harvest. 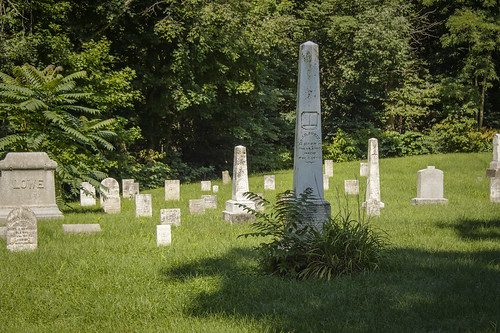 Lowe, Deerwood Subdivision
Lowe Cemetery has 165 headstones, making it the land tract with the largest amount of recorded graves. North Carolina native Thomas Lowe, along with his eight children and their families, came to White River Township in March 1821. Thomas Lowe, Jr., was one of the first two elected Justices of the Peace, and later his brother Abraham held the same office. However, the first thing founding families such as the Lowes had to do was clear their land, so they could begin to plant crops. Neighbors would help each other fell trees during the day, and then they would return to their own land at night to burn the fallen brush and trees.

Lyons, Fry Rd. just east of Bomar Lane
Several of the 89 headstones in Lyons Cemetery mark the grave of more than one individual plot. Robert Lyons, who was originally from Pennsylvania and then Kentucky, settled in White River Township in 1827. In “A Historical Sketch of Johnson County,” Banta related, “No man could excel him in the performance of the arduous duties belonging to pioneer life.” The book told of the many hardships people of that era had to face, including massive amounts of insects. During certain times of the year, horses could only plow for a few hours in the morning due to the large numbers of biting flies. At night, they filled the cabin with smoke in order to drive out the mosquitoes. Then they closed the doors to prevent them from returning. 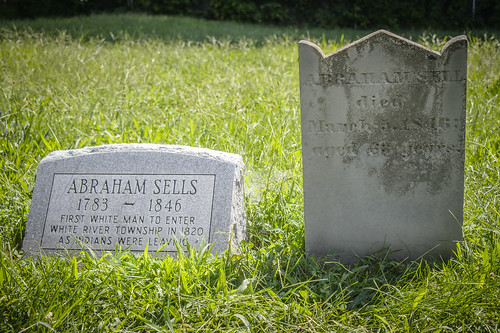 Messersmith, Peterman Rd. between Smith Valley Rd. and Fairview Rd.
There are only 16 graves in the Messersmith Cemetery, but one of them belongs to Abraham Sells, credited as the very first settler in White River Township. Several members of his family, including a brother buried in Lowe Cemetery under a headstone that reads “John Sell,” accompanied him. They were indeed blood brothers, but for some reason, John dropped the “s” from his surname. Sells’ original headstone was made of sandstone that is susceptible to weathering. The family placed a new headstone next to it in order to maintain his place in history.

If you look closely at these infant graves in Messersmith Cemetery, the baby angels actually have different expressions on their faces. “I’d like to think the headstone carver knew the family,” Messick mused, “and cared enough to give them individual faces.” 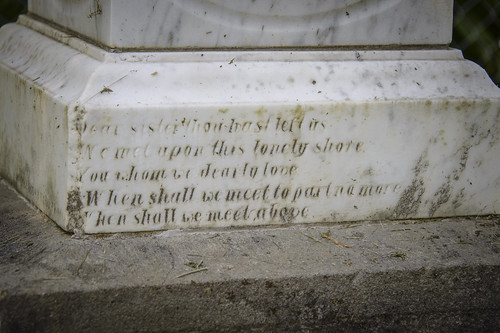 Miller, CR 144 west of Whiteland Rd. about 1 mile
Miller Cemetery encompasses five acres, but there are only 27 marked graves which are mostly along the perimeter of the property. Messick believes many others are buried there. Lack of funds for headstones as well as widespread disease such as dysentery between 1832 and 1836 wiped out entire families, increasing the probability of unmarked sites in the center. He explained, “A family may not have had any money for a real headstone, or a church might have stepped in to help with the burial. A wooden marker may have been put up, but over the years, it would turn into mulch and then dirt.” For those who had the economic means to afford a substantial headstone, inscriptions were often engraved on the markers. This one found on the edge of Miller Cemetery appears to be made out of marble, which is uncharacteristic of the era. 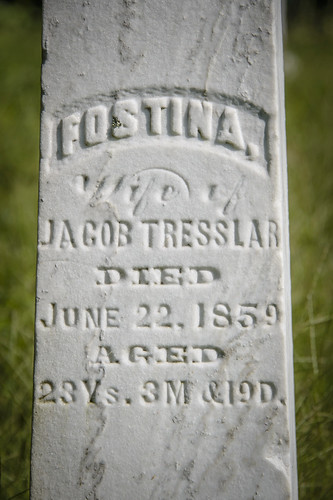 Tresslar, CR 375 W west of Morgantown about 2 miles
The Tresslar Cemetery contains 53 gravesites and has been known by several names: Dresslar, Robinson and Shufflebager. Messick gave the following explanation for the name confusion, “Imagine a farmer homesteading with 12 or 13 children and perhaps some other relatives either visiting or living with the family. If someone died, they would be buried right there on the property. If they had a year of bad crops, the family may have moved on to another area. A different family would take over the land, or the area would become a settlement for several families. Each time it changed hands, the cemetery on the property would be known by a different name.” Messick also gave the reason why it was once known as Dressler and is now Tressler: “One brother spelled his last name with a D, and the other one signed his name with a T even though they had the same father.” Legend has it that Native Americans are buried close-by. Messick feels that this is probably true because the area was known as a popular hunting ground, and visiting tribes might have picked up diseases from interacting with pioneer settlers.

All six of White River Township’s cemeteries are tangible documentation of the area’s first settlers. Luckily, the Indiana State Legislature recognized their importance before they were lost to sprawling development. Thanks to Messick’s diligent care in overseeing these abandoned cemeteries, they are far from being “lost” but will exist for years to come.

Rebuilding From Rubble: A Trip to Nepal