The Status of the Road to the North 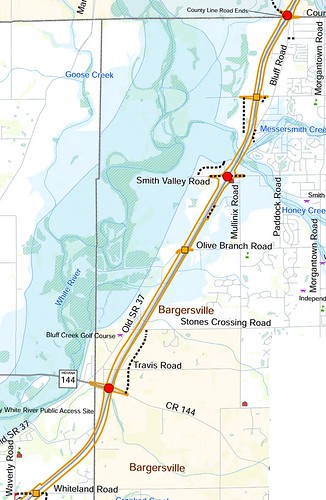 The Interstate 69 project has been an ongoing discussion since its inception in 2004, starting in Evansville and slowly working its way north.

Now that the project has come to its stop in Martinsville, Indiana Department of Transportation (INDOT) has shifted its focus to Section 6 of the project. This section will take the Interstate from Martinsville to Interstate 465, said Lamar Holliday, Public Involvement Specialist for the I-69 Project, Section 6.

State Road 37 Not a Sure Thing
Many people are under the assumption that the route will obviously be along State Road 37. While, yes, in 2004, State Road 37 was the approved route, by the time they got to Section 6, Holliday said a lot of expansion and development had occurred along State Road 37 which made previous arrangements different, and route options had to be determined.

General meetings were held with the public and two separate committees to discuss options. Two separate groups have been formed to help provide input to the team, said Holliday. The Stakeholder Working Group (SWG) includes individuals who represent local government agencies within the Section 6 Study Area, individuals who are involved in planning, engineering and public works departments.

The Community Advisory Committee (CAC) includes individuals who represent other organizations in the community, such as homeowner’s associations, school corporations and logistics companies. Both play a part in advising on Section 6.

They had great success, Holliday said, and the public came up with 27 different alternatives.

The 27 alternatives were then narrowed down by the project team to 14 possible routes. These 14 options were discussed at additional public meetings, and comments were presented to the team. They took those comments into consideration and further scrutinized the 14 alternatives to come down to five possible routes. The five were introduced in June 2015 via news conference.

It’s Down to Five Options
They are currently taking that information and moving through Tier 2/Phase 2 of the process, which is the environmental study. It is no small feat, Holliday said, as they have received a large number of  comments regarding the alternatives, the final number of comments will be released later this year. The alternatives will eventually be reduced to three and included in a lengthy Draft Environmental Impact Statement (DEIS) to be officially handed over to the Federal Highway Administration. The report is anticipated to be completed in the first quarter of 2017. The Federal Highway Administration will have through 2018 before releasing their final stamp of approval of INDOT’s recommendation.

State Road 37, otherwise known as Alternative C, is still being considered as an option, and this option, Holliday said, will not be eliminated until the DEIS has been submitted to Federal Highway Administration. Only the federal highways assessment will eliminate Alternative C if that route is not chosen.

More Public Input Requested
The next phase will be design and construction, Holliday said. Not all five preliminary alternatives will be carried forward in the DEIS. Cost, environmental impacts, performance measures and public comments will help bring these down to three.

INDOT is asking the public to submit any questions regarding proposed access roads, interchanges and proposed overpasses/underpasses. All of these changes affect your property or business, and INDOT wants to know your comments as well as any other proposed alternatives.

According to Holliday, the consultant team is available to answer questions from members of the community, either in person, on the phone or via email. Boards and other documents from meetings are available for public viewing as well.

The office, located at 7847 Waverly Rd. in Martinsville, is open Monday through Friday from 9 a.m. to 4 p.m. You can also email suggestions, comments or questions to section6pm@indot.in.gov or call the office at 317-881-6408. More information, including maps of the routes, can be found at i69indyevn.org.