Construction has started for Center Grove’s new Walmart to be located just south of the infamous SR 135 and Smith Valley Road intersection. Construction, however, is not limited to the building site. Road improvements to prepare for the increased traffic have also begun.

Center medians are being added to Smith Valley Road that will extend past the intersection and terminate approximately 125 feet west of the CVS entrance as another is being added on SR 135.

Richards says that these improvements will help mitigate daily congestion that leads to car accidents and lengthy traffic delays. The biggest contributor of these accidents has consistently been left-turn movements. 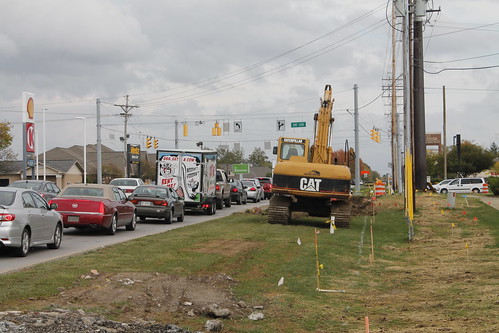 The traffic situation at Smith Valley Road and SR 135 is not expected to improve significantly with the changes to the traffic patterns.

Hopeful Traffic Control Will Help
Marcy Renken, whose office is located on the corner of Smith Valley and SR 135, hopes this construction will eliminate the congestion and accidents at the intersection.

“It is not uncommon to be at my office and hear emergency vehicles being sent to that very intersection,” said Renken. “We even had vehicles come up into the yard surrounding the office. The potential for an increase in traffic flow near the Smith Valley and SR 135 intersection demands a better solution for traffic flow and safety.”

Originally, construction was scheduled for the spring of 2014. The official work began in early October, and the work should be completed by late fall.

May Impact Small Businesses
Not all residents are pleased with the changes.

“I feel that with Target, Marsh and other grocery stores, what will be the benefit to this side of town?” said Center Grove resident Heidi Whitrock. “What Walmart will do is make small businesses go out of business and cause greater traffic congestion to the state road 135 intersection and the subdivision it will surround.”

The Walmart location is also close to nearby businesses, including a local KinderCare daycare. Drivers can only get to the daycare through an access road at the light for Target and Home Depot entrances. The access road is large enough for the current traffic, but the new store will add to this this traffic since the Walmart parking lot leads out directly to the road.

While progress on the exterior is progressing rapidly, the store is not expected to open until sometime in 2015.

Opening Date Not Set
“It takes about a year to open a Supercenter after we start construction,” said Bill Werts, Walmart director of communication. “Additionally, Walmart shares a strong interest with the community in making sure that customers have safe and convenient access to our stores. We work with both the city and the state to study traffic patterns in the area and ensure that appropriate actions are taken.”

One potential project to improve safety includes plans for a “Michigan Left,” an intersection design that replaces each left turn with a U-turn and a right turn, to be added at this intersection. However, Richards says nothing is certain as the city has only recently requested funding through a federal grant. The funding for these projects is not expected to be given until 2019 or 2020.