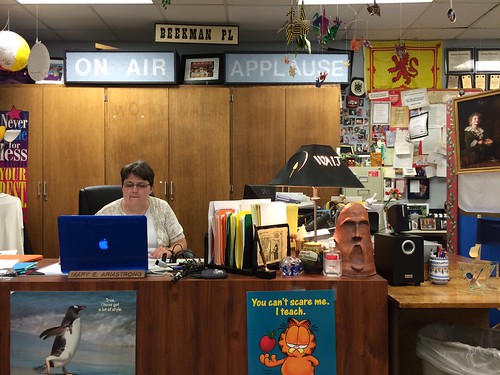 A mainstay with the Hamilton Southeastern English and drama departments, Mary Armstrong, or “Ma” as she is affectionately referred to, is still going strong.

Her classroom is like a theatre museum of classic props and posters, with visual distractions that stimulate the imagination every where your eye is drawn. My favorite article of decor is a giant rabbit topiary that sits in the corner from the production of “The Secret Garden”.

Armstrong is in her 37th year of teaching at HSE. She knows me by my maiden name, which is fine with me, especially since it has been 25 years since I walked these halls. Aside from witnessing lots of growth within the building and the increasing size of the student body, the HSE Drama Club has remained efficient through the years.

With a strong tradition of maintaining a program independent of budget cuts apart from the lighting bill and auditorium maintenance, the HSE Drama Club has been able to continue running along smoothly with minimal fees and few fundraisers.

“We have been very lucky. The dues are just $5 for Drama Club and we do not charge fees for a student to participate in a production,” said Armstrong.

“We have over one hundred members and are able to meet our budget with our productions,” said Drama Club President Zoe Turner.

“Our entire team work very hard to put on these productions with our talented cast and crew,” said Armstrong.

Long before Harry Potter received his wand, Armstrong received hers.

“It was a gift from someone when I directed my first play,” says Armstrong.

It’s the kind of wand with liquid inside along with glitter and stars. She had it offstage and noticed that anyone that sat there would play with it to calm nerves, so she started a new tradition. After a student participates in three productions, they are eligible for a wand, which is ceremoniously awarded. The student’s participation in these productions must be exemplary, going beyond the call of duty in order to earn a wand. Now, years later, the wands are highly coveted.

“The wands are a big deal for us, some of the students decorate theirs with stickers or ribbon, and it is as important to a drama student as a Varsity letter for an athlete,” said Turner.

This fall’s play will be “A Bad Year for Tomatoes” by John Patrick, Dramatists Play Service Inc. It’s a comedy about a famous actress who leases a house in a tiny New England hamlet to write her autobiography in peace. The neighbors won’t leave her alone, so she invents a crazy, homicidal sister to scare them away in order to gain privacy. Complications arise and the comedic situations ensue.

As with all previous productions, cast and crew work together on set construction.

The sets have always been remarkable, with a high-ticket quality and low-cost pricing ($6/ticket). The high school productions for their musicals, plays and band and orchestra performances are not to be missed. These kids play, sing, and act their hearts out!