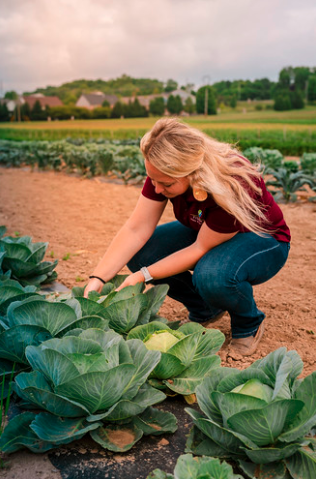 A one-of-a-kind park is now open in Fishers for the enjoyment – and education – of individuals and families throughout Central Indiana.

In early 2018, Fishers Mayor Scott Fadness first announced the idea for the AgriPark in his State of the City address, and later that year plans were underway to build out the park, which spans approximately 33 total acres near 113th Street and Florida Road.

“We really think it’s important that the community knows where their food comes from and has access to fresh, locally grown produce,” says Sarah Sandquist, director of Fishers Parks & Recreation. “We’re excited to offer something that is very different from the rest of our parks.”

The idea behind the Fishers AgriPark is for visitors to learn firsthand amidst an actual working farm and gain knowledge on farming practices, technology and innovation. There’s a full produce garden as well as livestock, all tended by a full-time farm manager.

“Having actual livestock offers the opportunity to get up close with cows, chickens and sheep to experience a real farm setting,” says Sandquist, adding that the park also includes a nature trail and a play area made out of tractor tires. “We have a full-time coordinator in charge of programming, as well as a full-time farmer who is the manager.”

The AgriPark garden includes a large variety of produce like snap peas, sweet corn, beans, squash, cucumber, kale, tomato, kohlrabi, peppers, strawberries and more. Three acres worth of produce was planted this year, and park leaders plan to ramp up the garden size in future years.

“We have every kind of herb you could think of,” Sandquist says. “There’s cilantro, parsley and chives. We’re also growing a huge wall of sunflowers, and we’re anticipating having people come out for photo opportunities as well as lots of education around the sunflowers and using the seeds. We’ll be growing pumpkins in the fall, and they got planted in June so they should be ready just in time for October.”

The AgriPark officially opened to the public on July 28, and leading up to the opening celebration, Fishers Parks leaders scheduled volunteers to work at the park two times per week to prep the grounds and garden. “There’s watering, weeding and picking to do, and we’d love to continue having volunteers come out,” Sandquist adds.

Park leaders also built out a five-acre tree nursery in the northwest corner of the park, including 200 trees planted earlier this year. After the trees have grown and are ready to be harvested, Sandquist says the Parks department plans to use them to replace trees in other Fishers parks that have died.

“We also will use the trees in our right-of-ways, and hope in the future to also offer a neighborhood grant program similar to our existing grant, but for use within residential yards,” Sandquist adds. “Right now, it’s only for right-of-way trees.”

Fishers Parks & Recreation leaders plan to direct much of the fruits, veggies and eggs produced at the park toward food-insecure areas, and Sandquist says the department plans to coordinate with the Good Samaritan Network for donation of food surpluses.

“We’re still working out quantities so everybody has the opportunity to get some, and the food is available for free pickup,” Sandquist explains. “We’ve been doing it first-come, first-served and announcing when we have food shares to be picked up. Down the road, I would love to grow food that we can get to the Youth Assistance Program for their summer meals program.” Sandquist says AgriPark leaders will host structured programming beginning in the fall and plan to host a small corn maze at the park, too.

“We’ll have a variety of one-day programming, dealing with how the farm translates to your own backyard,” she says. “It will cover growing a salsa garden and canning — the full process from planting the plants to preserving for when it’s not growing season.”

Additional programming will include up-close visits with the livestock, which includes a cow named Mudsock.

“We ran a fun naming campaign for the community and had several hundred submissions,” Sandquist says. “There were several entries for Mudsock, and Brownie was another popular entry.”

Sandquist says Fishers Parks officials are currently in talks with leaders at Hamilton Southeastern schools to develop a program that will combine classroom work and onsite farm programming.

“We hope the program will be looped so you’ll be able to see a full growing cycle starting in the spring and finishing up the following school year in the fall with a harvest,” she says. “We’re excited about the programming that we’re coming up with for the park.”

The Fishers AgriPark is located at 11171 Florida Rd. For more information about the AgriPark, including volunteering details, visit playfishers.com. Be sure to also visit the Fishers AgriPark Facebook page for details on produce giveaway days and other unique programming opportunities for you and your family.