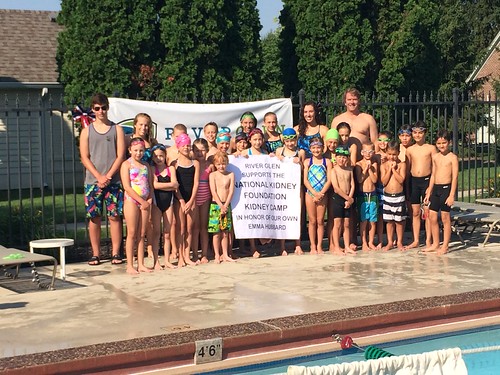 On June 27, the River Glen Country Club swim team held its annual philanthropic fundraiser. This year’s event had special meaning for the swim team, because the money was raised in honor of one of its own team members.

After learning about 10-year-old Emma Hubbard’s recent diagnosis of membranoproliferative glomerulonephritis (MPGN), an autoimmune disease that affects the kidneys, the swim team coach, Doug White, approached the Hubbard family about donating the proceeds from this year’s fundraiser to the National Kidney Foundation. During Emma’s treatment at Riley Hospital for Children, Jenny Hubbard, Emma’s mom, learned about the NKF’s Kidney Camp program. She asked White to consider channeling the fundraiser proceeds to the camp.

River Glen pool manager Stephanie Thompson and the River Glen community embraced the idea that its 90-member summer swim team could help send especially deserving children to summer camp. “Our swimmers raise money per lap or by lump sum, and the fundraiser was personal this year because of Emma. We’ve raised over $1,500 for Kidney Camp,” said Thompson.

Kidney Camp takes place at Camp Tecumseh, near Brookston, Indiana. “For one week, these kids aren’t patients, they’re campers, just like any other child; they get to experience normal childhood camp activities such as swimming, rock climbing, archery, canoeing, and even zip-lining,” said Tricia Behringer, program manager for the National Kidney Foundation of Indiana. The camp is free for kids with kidney diseases, as well as for those who have received transplants. To manage their illnesses while at camp, portable dialysis machines, medications, and necessary treatments are transported to the camp facility. For patients who need in-patient care, transportation is provided to Riley Hospital in Indianapolis.

“The week of relief for the parents is also wonderful. Many of them drive from hours away and make sacrifices to come to Riley for treatment, often several times a week. To know that their kids are safe and having fun brings such peace of mind,” Behringer said. “The kids feel safe and know that they won’t be made fun of here, because all the kids are familiar with the treatments,” explained Behringer.

The program is in its tenth year and hosts around 40 campers, ages 8-18, each summer. “Financial contributions, such as those from the River Glen fundraiser, make it possible for us to create the camp experience for these remarkable kids. We’re truly thankful!” added Behringer.

The Hubbard family feels grateful for the support they have received from the River Glen community. “Emma’s condition is currently being managed with medication, and we’re so appreciative and humbled that River Glen and the swim team wanted to help provide support for Kidney Camp,” said Jenny Hubbard.