In January of this year, when most of us are contemplating unrealistic goals we set for ourselves during the New Year’s resolution wave, Scott Bradford made the conscious decision to become a triathlete.

“It is more about creating positive change and good habits in my life,” says Bradford. “I am 44 years old and feel I am ready for a challenge.”

Bradford confesses to fits and spurts with his fitness history. Although last year with the encouragement from his younger brother Mark, they completed a couple long distance cycling runs, one for 50 miles and another for 100 miles.

“I have never considered myself an athlete,” says Bradford. He played soccer and baseball through school and was a good teammate. Bradford took up cycling a few years ago and enjoys it enough that he thought it would be cool to complete a triathlon. “There was no other reason other than that,” confesses Bradford.

Bradford’s younger brother Mark in Kokomo invited him over for a cookout and told Scott to bring his running shoes. “He made me run a mile with him before dinner,” says Bradford. “I hadn’t run a mile since high school. I surprised myself and finished the mile.” 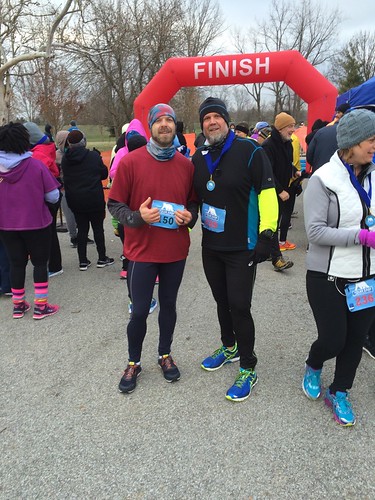 Scott Bradford and his brother Mark at finish of The Polar Bear Dash in Noblesville, their first race together

One of the first things Bradford did after making the commitment to complete a triathlon was surround himself with encouraging people. This was easily done. His brother, his girlfriend and his trainer all support his efforts. The commitment to the training it takes to do three sports requires an organized routine and discipline. Mark, who is a runner, has committed to a triathlon with Scott, so they signed up for their first triathlon April 24.

“It’s great that Scott has the brother thing which is great to have that fun competitiveness between them,” says Ty Terrell, Bradford’s trainer at iFAST. “But it’s his diligence and work ethic that has the biggest impact on his training. It’s a credit to him.”

Bradford’s training is made of the essential pieces needed for long distance athletes. Strength is a key component. “The stronger you are, the more you can handle,” states Terrell. “Athletes need to power through running or cycling up a hill. A trained body can calm a lactic acid system and push through.”

Bradford thanks iFAST in Fishers for helping his achieve his goal. Terrell changes up Bradford’s workouts every four weeks to keep pushing to him to new levels.

“I feel so much stronger today than I have in my entire life,” shares Bradford. “And I see results in my training when I am not in the gym.”

Bradford used to run a 12-minute mile, and now he is down to a low 9-minute mile. His time spent in the pool has improved with his endurance levels increasing, and his average cycling speed is at least a mile and a half faster.

“There are reasons why trainers come to us from all over the country to learn what we do here,” says Terrell. “We listen to feedback from clients. They see results.”

“People have great intentions when they sign up, but Scott walks the walk,” shares Terrell. “We all experience peaks throughout training. You can’t be climbing constantly. You peak and level, and you have an off season. Then back to prep and performance, and we do it again. Like a pro athlete.”

Inaugural Corn Hole for the Cause Raises ...