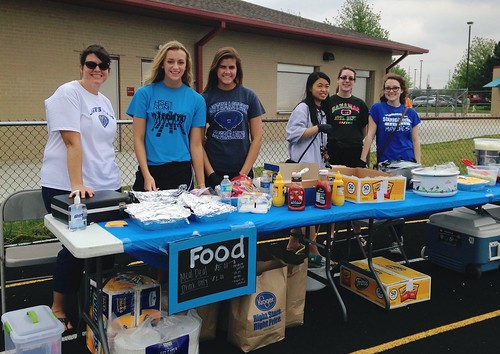 Jake Fest is put on by the Best Buddies organization at Hamilton Southeastern High School to raise money for scholarships for students who participate in the Best Buddies program. Money from last year’s event will be awarded this year to a graduating senior.

“Best Buddies provides an environment where students can develop friendships. The paired students learn a great deal from one another, and the impact is spread to the community,” shares Best Buddies program leader Risa Petty. “We have just over 200 members in Best Buddies this year.”

Jake Willmann, whom the festival is named after, had a rare congenital disease called moebius syndrome. Moebius syndrome is a rare neurological disorder characterized by weakness or paralysis of muscles in the face, disabling the person to be able to smile. Jake also had severe autism and was an amputee who wore a prothesis.

While Jake was nonverbal, he was highly intelligent, and it was discovered in first grade at Geist Elementary that he could type. Prior to this discovery, Jake had no means of communication.

“HSE did a phenomenal job of allowing Jake to be educated alongside his peers,” shares mom Karyn. “At first, he didn’t want to be involved with the Best Buddies program, but once he decided to give it a try, it was one of the best things he ever did.”

Jake passed away unexpectedly over a year ago from a seizure he experienced during the night. He was 17. Jake would have been a senior at HSE this year.

Jake’s twin sisters Abbey and Grace are freshman at HSE this year, and both joined Best Buddies. “Best Buddies has given me the chance to have a strong bond with my buddy that will never be broken,” shares Abbey. “The relationship that I had with my brother inspired me to be a part of this amazing organization. I’m thrilled to be involved in the Best Buddies program. It has given me a special friendship that will last forever.” 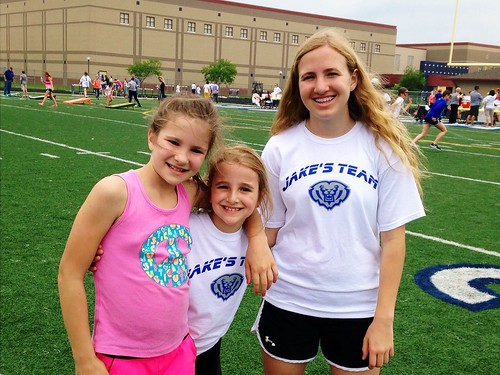 Grace adds, “I am so happy that I chose to be a part of Best Buddies. It has definitely had a positive impact and benefit in my life. I love hanging out with my buddy Shannon! We like to go to Starbucks, play with animals and shop. We have so much in common! I am so lucky to have been paired with such an amazing person and friend.”

“Jake Fest is about honoring a young man’s life that was extraordinary,” says Petty, who is also a Life Skills teacher at HSE. “In his short time on this Earth, he changed the lives of many.”

“I was motivated to be involved with Best Buddies when I got involved with Peer Tutoring in the Life Skills classrooms at HSE and loved getting to work with those who have intellectual or developmental disabilities (IDD),” shares Meghan Lynch, a freshman at Ball State University majoring in Psychology and an Intro to the Autism Spectrum minor with plans going to grad school for Applied Behavior Analysis (ABA). “I wanted to do more than just work with them in school, so I joined Best Buddies to get more of an opportunity to actually hang out with them and create closer friendships!”

Lynch became good friends with Jake, and when he passed away, their team wanted to start something that would celebrate Jake’s amazing life. “Last year was an incredible start to the annual event, having a dunk tank, face painting, trike races, cookout and so much more!” shares Lynch. “We combined many of Jake’s favorite things to do to create a day just for him that Jake would love.”

The idea for Jake Fest was born in Jake’s death, but it’s his life that is celebrated. The back of the T-shirts worn last year read, “When called to duty, you either fall or soar. Right now, I am walking.”

The First on Our Block to Fly