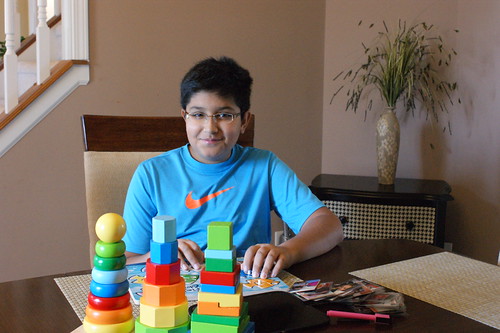 A 13-Year-Old Helping Those with Alzheimer’s

Most 13 year olds are more focused on their XBOX games and iPhones, and while Rahil Thanawala, does play XBOX, this eighth grade student at HSE Junior High School has another focus: helping those with Alzheimer’s.

“My grandmother lives mostly with us and she has Alzheimer’s,” said Rahil. His grandmother, Dayaben Thakker, has visited frequently over the last 16 years from India, and now lives here more than not.

“She began showing signs of dementia / Alzheimer’s about 14 years ago, with a major down slide into the disease about six years ago,” said Rahil’s mom, Rapul Thanawala. 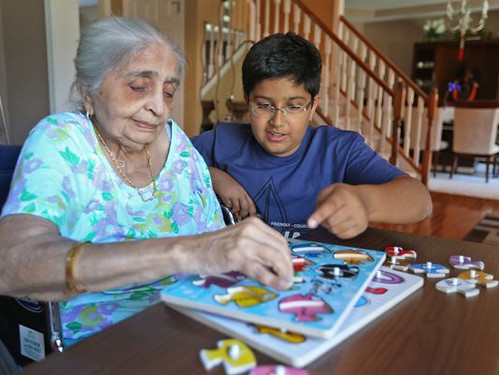 In order to spend time with his grandmother and also provided brain stimulation, Rahil would do puzzles with her. These puzzles were the wooden toddler type, some with magnetic pieces. Rahil became bored with them, and decided to customize the puzzle experience using photographs of their family. He also created customized flash cards for his grandmother, using images of their large family.

“She will look at pictures and begin talking all about someone or a funny story. It is with these pictures, that she is piecing together memories and sharing those with us,” said Rapul.

These personal memory aides were well received by his grandmother. Rahil wishes to share this experience with others who have a family member with Alzheimer’s. The result is his non-for-profit, The SnapLink. On his website, an individual can order customized flash cards and magnetic puzzles.

This summer, Rahil attended the Dementia Symposium at the IU School of Neuroscience. He had a booth at the event to showcase his project. “Many researchers, doctors, nurses and caregivers visited my booth,” says Rahil.

Driven by his compassion to help his grandmother, he sought knowledge and assistance from others in the field of neuroscience. Photo Therapy, which is what he has been doing with his grandmother, helps cognitive and memory skills in Alzheimer’s and dementia patients.

Recently Rahil, along with a few generous sponsors, presented a screening of the “Alive Inside,” which won the 2014 Sundance Audience Award. Generously hosted in the Eugene and Marilyn Glick History Center, the screening provided The SnapLink with its first major awareness event about non-prescription assistance for Alzheimer’s and dementia patients. This event also had keynote speakers Bryan Mills, CEO and president of Community Hospital Network, and Dr. Ann Marie Hake, memory care adviser to Eli Lilly & Co. 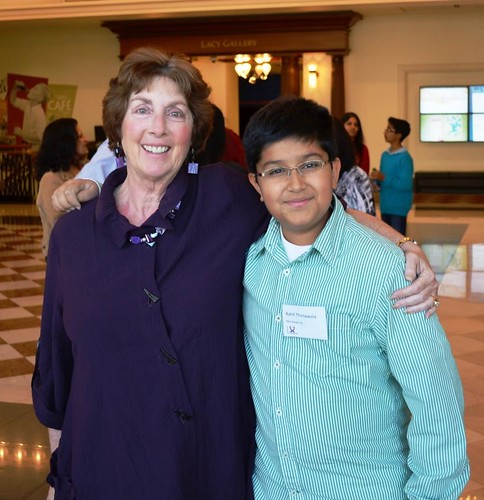 “I can’t thank Rahil enough for bringing “Alive Inside” to Indianapolis,” said donor Marianne Glick after the premiere. “I hope the film will inspire others to donate to SnapLink for the benefit of Alzheimer’s patients.”

“Alive Inside” is a documentary focusing on the powerful use of music as another cognitive tool. Filmmaker Michael Rossato-Bennett chronicles the efforts of social worker Dan Cohen as he demonstrates music’s ability to reach Alzheimer and dementia patients when medications fail.

The SnapLink, in addition to the puzzles and flash cards, also donates MP3 players and headsets to Alzheimer’s patients in nursing homes. Rahil speaks to assisted-living facilities, retirement communities, Alzheimer’s units, and families and caregivers for those with Alzheimer’s and Dementia about photo and music therapies.

For more information, to request a speaking engagement, to donate and order flashcards, visit TheSnapLink.org.

Spirit of Sharing: Inside India with Dr. ...