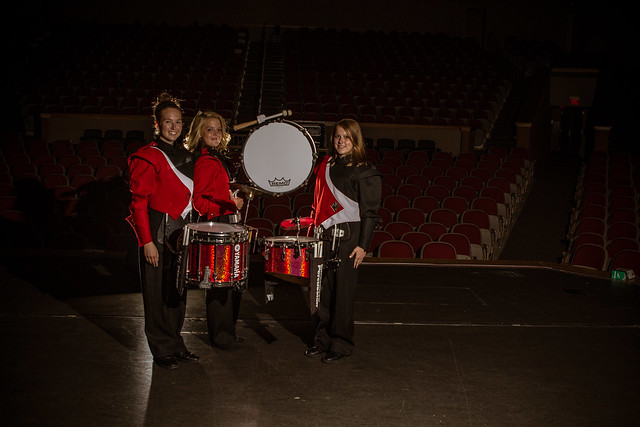 Percussion provides the heartbeat of any band, and the battery (commonly referred to as the “drumline”) of the Fishers High School Marching Tiger Band is no exception.

It takes time, energy and countless hours of preparation to do what they do. The Tiger Band is an award-winning team made up of 190 musicians, comprised of mostly honor students who march and perform for the love of music. The camaraderie of this group of musically-talented students dedicate countless hours to their craft.

Of the 190 marching band members, 41 comprise the percussion section, 19 are in the front ensemble (known affectionately as “the pit”) and the drumline, who marches, has 22 members. And of the 22, three are girls.

Senior snare drummer Molly Baldwin was drawn to drumline because she saw how much fun they were having.

“You could tell they were putting their whole heart into every performance,” said Baldwin. “I knew that I wanted to be a part of that.”

So after playing soccer her freshman year, she traded in the soccer ball for a 20 pound drum and loves every beat of it.

Other drums that are played in marching percussion are tenor drums, which is a grouping of five differently pitched drums that weighs about 50 pounds, and bass drums, the deepest pitched of the drums. In the past, Baldwin has played marimba and vibraphone with the pit.

Baldwin, who is in the top 25 of the senior class, is going for the AP/honors diploma and plans to continue her music in college next year as well as pursue a major in chemistry or engineering.

“Being in drumline has changed my life. I have met some of the greatest people I have ever known, and the activity continues to be a positive outlet for me,” said Baldwin.

Her only regret is that she didn’t join sooner.

“I cherish the time spent with marching band, and being with my bandmates is like being with family – it will never be enough,” she said.

The feeling of the band being a family is shared by sophomores Alaina Gabbard and Sami Marcotte.

“We are a family within this large marching band, and while we all get along, there is something special about drumline,” said Gabbard, a mini drummer.

Gabbard started begging for a drum set when she was 6 years old, and shortly thereafter her parents acquiesced. Gabbard’s first experience in a percussion group was through her church.

“When the Fishers High School Marching Band came to my sixth grade concert, I knew I wanted to play the tenors,” says Gabbard.

She currently plays the mini tenor and is working her way up to tenors, the cluster of drums carried in front. Gabbard loves marching, playing drums and being with her friends. Conveniently she gets to do all of these things simultaneously in marching band.

Bass drummer Marcotte moved to Fishers four years ago in order to switch to a new gymnastics coach. She had over 20 national gymnastics championship titles, but shortly after the move, Marcotte suffered a spinal fracture. She spent her first summer in Fishers immobilized in a cast for a long and lonely three months. The injury prevented her from resuming her gymnastics path.

As a freshman marimba player, she spoke of the “percussion family” and how they looked after each other. Marcotte found solace in her new home with her new family – the drumline. It was then that she began to thrive on the encouragement everyone gave her, and her parents were thrilled that she recovered her spark that had been momentarily lost since her injury.

Naturally competitive, Marcotte channels her aggressiveness and determination into her performances. It also doesn’t hurt being one of three girls in an otherwise male-dominated drumline. She doesn’t back down from a challenge, and with all of the drumline pushing each other supportively, it only makes them better.

“I love the FHS Marching Band because it is fun, and it’s like one big family,” said Marcotte.

Coming together on a foundation based on their love of music, these musicians have also found encouragement, support and a sense of belonging. It is no wonder that the FHS Marching Tiger Band is award winning. November begins the winter percussion competition season that runs through April. The FHS winter percussion are four time state champions!

“Tapping off” is a term used to describe the snare drummers who tap their sticks to the metal edge of the drum at the beginning of a performance. It is a call to attention and sets the beat. It is a signal to the winds, horns and brass and to all of the members to take a breath. And in that moment of tapping off, the breath, the anticipation, the adrenaline and the focus all culminates and it simply means: it’s showtime!

To keep in step with the FHS Marching Tiger Band, visit fishersband.org and indianamarching.com. 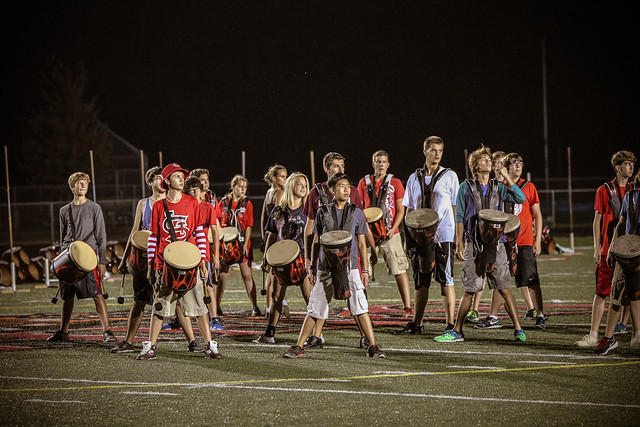 Fail Fest – A Celebration of Failure ...