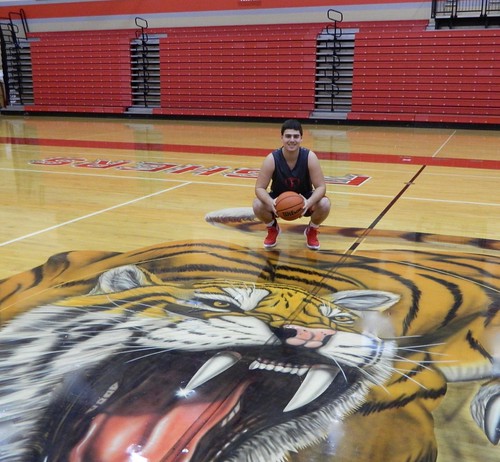 Quite a lot as high school players, according to Fishers coach Joe Leonard who coached Conley — now a starting guard point guard for the NBA Memphis Grizzlies — when he played at Lawrence North.

“I’m not comparing Zach with Conley necessarily in terms of statistics or talent, so much as I am in Zach simply being such a tremendous leader,” the coach said this season. “Conley was a great leader….But I’ll tell you, though, Zach is really something special….And we may never see another leader like Zach Eaton.”

That’s quite a statement, quite a compliment for sure.

And what did Zach say when he heard about that comparison? Well….his eyes lit up. Maybe not basketball size, but there was no mistaking he was feeling pretty good.

Zach is Mr. Energy. Instant Energy if you will – both on the football field where he enjoyed a great deal of success as quarterback the past two seasons and on the basketball court where he’s been handling the ball and delivering crisp, money-in-the-bank passes since he started dressing with the varsity late in his freshman season.

Eaton, a leader extraordinaire, said that one of his proudest moments came this year when he became the school’s assist leader in basketball.

“When I came in as a freshman, that was one goal I set for myself.”

Zach also came into 2016 leading Hamilton County in 3-point field goal percentage on 7-of-12 accuracy, and he was second in assists, averaging 5.0.

In football last season, Zach was a co-QB on an All-County football team and was among the leaders in passing for years.

He’s quite a young man, and there’s no mistaking his charismatic manner and persona. He makes his presence felt in many ways, and at times, he’s Mr. Rah Rah, like a cheerleader in sports gear.

During football games, the 6-foot, 195-pounder is known to run behind the team bench high-stepping and raising his helmet high while constantly adding encouragement to a very boisterous student cheer block.

On the basketball court, he dances up and down the hardwood with a special spring in his step and gleam in his eye. He high-fives his teammates, pats them on the rumps and shouts encouragement, no matter what the occasion or circumstance might be.

He possesses an energetic, outgoing, extroverted and entertaining side, and he’s able to express himself in a positive, determined and always confident manner.

No, not really, he says with a big smile. “I’m sure some might think so,” he said flashing a grin. “I’m very excitable. I like to get my teammates and the crowd going. That’s my role as a leader. I do whatever is necessary to help the guys raise their game and to help the team….to help us win.”

He gets very excited before his own games as well as when he attends Colts, Pacers or Butler games.

The one thing most people don’t know about him is that he often gags before those games.

“It’s a gag reflex,” he said, matter-of-factly. “I get so excited that I can’t talk because my stomach gets so tight, and I start to feel sick, which makes me gag — and then I go right back to being fine.”

When asked what sport he likes the best, he smiled and said without hesitation, “All the sports I play.”

Zach’s effervescent, ‘can-do’ attitude and spirit likely can be attributed to his family genes.

His late grandfather, Chris Theofanis, who passed away in 1999, was involved with Butler University for 44 years. He was known as “Mr. Butler” by many. He always had a smile and was a true gentleman that the media enjoyed getting to know.

He served as the Butler Athletics Public Relations Director, and he was a great promoter of high school and college basketball.

“My grandfather passed away when I was very young, but yes, I’ve heard nothing but amazing things about him, and everyone knew and loved him,” Zach said.

Zach’s grandfather’s brother, the late George Theofanis, coached Indianapolis Shortridge back in the heydays of Indiana high school basketball, and he led the school to the state runner-up basketball championship at Hinkle Fieldhouse in 1968. He also was a standout basketball player at Indianapolis Washington.

Talk about being a Butler Family. It is still the Butler Way for the Eatons.

Zach’s sister Kailey plays tennis at Butler where her grandfather graduated in 1952. Kailey also played No. 1 singles all four years at Fishers HS.

During the recent renovation of Hinkle Fieldhouse, the family contributed to a plaque that is part of the walking tour of Hinkle. The plaque honoring Chris and George is inside Gate 4.

So is Zach headed for Butler? Well, yeah!

Though he’s had some offers to play football at some Div. III schools, Zach recently made a decision to hang up his cleats and attend Butler University.

Zach said he “loves Butler,” and his parents said they cannot argue with his logic!

There was no family pressure. Zach simply decided to follow his heart and add to the family tradition.

In addition to high school sports, Zach has been quite a success in the classroom. He carries a 3.75 GPA and is thinking about a possible career in marketing.

“I have a great class at Fishers. I’ve always liked marketing, and I like talking to people. I think the fact that I’m so outgoing would be a tremendous asset for me in that field.”

Also, Zach was the Academic Student of the Year at Riverside Junior High. He’s in the National Honor Society, and he’s a member of the Student-Athletic Council. That group discusses sports and athletics in general and what they can do to make things better for athletics in general.

Other than his accomplishments in basketball, there’s one last goal still out there for him and his teammates. Yep….Winning the SECTIONAL!

“We beat [highly-ranked] North Central in a first-round sectional game last year, and we came close to reaching the sectional title game, losing to eventual champion Carmel in two overtimes in a semifinal.

“We’ve never reached the sectional championship game in boys basketball. That’s what we want this year….We want a chance to play for that championship.”