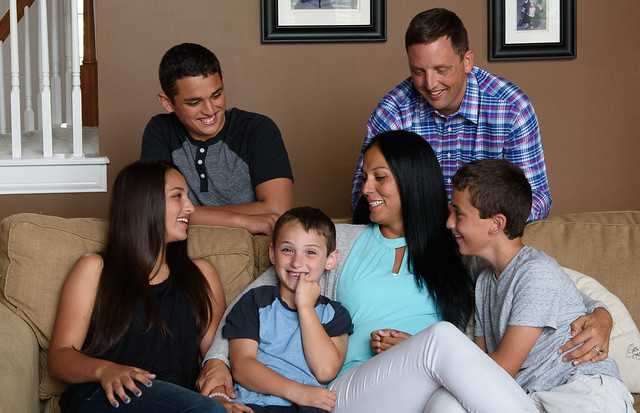 “Courtney is a wonderful mom to four sweet children of her own. However, I am nominating her because of her role as second mom to many kids. Many of Courtney’s friends (including myself) have children who have been the beneficiary of Courtney’s love. Although she has a full house, she often invites our children to join for trips to Sky Zone, tumbling, craft days, science experiments and more. From days of fun to math and science tutoring, ‘Ms. Courtney’ is mom to an extended group of young neighbors, school and cheer friends, rugby friends and wrestling buddies. She has created a strong sense of community by bringing families together who may have not otherwise met. I admire her spirit and her love of encouraging children to laugh and grow!”

Courtney and her husband, Chris Lawhead, live in Gray Eagle and stay very busy with their four children. Their eldest, Keegan, is a ninth grader at HSE. He enjoys wrestling, rugby and Boy Scouts. Their second child, Sydney, a sixth grader at FCI, just made the cheerleading team for next year at Fall Creek Junior High and is involved with Indiana Elite Cheer Team and Indy Premier Soccer. Third in line is Evan, a third grader at Fall Creek Elementary (FCE). He enjoys basketball, wrestling, baseball and Scouts. Their youngest, Spencer, is in kindergarten at FCE. He enjoys soccer, wrestling, basketball and baseball.

“We’re so blessed to live in this neighborhood. There’s always kids here shooting baskets with bikes everywhere,” says Courtney who says that she feels uncomfortable talking about herself or being viewed in the spotlight.

Besides volunteering in the classroom, for the PTO and sports teams, she holds an open-door policy with kids who migrate to her home as the central hangout spot. From playing on the swing set to creating a craft, kids inevitably sense that Ms. Courtney is a loving role model who enjoys seeing her children and their friends have fun while bringing families together.

“Within months of becoming neighbors, Courtney wrapped her loving arms around us all and made each of us – but especially my kids – feel like they were her own,” says Breana J. Daniels, friend and neighbor. “My two children have spent countless nights in her home and traveled on day trips and vacations with the Lawhead family….I don’t know a single person whose life isn’t better because of one of her acts of kindness. The best part of all this is that she doesn’t do it because we need her to. She does it because she genuinely loves them. She just loves.”

The Lawhead family gathers around the dinner table at their home in Gray Eagle. Left to right: Keegan, Courtney, Evan, Chris, Sydney and Spencer.

Courtney believes that the more kids there are, the more games you can play. Whether she supervises flashlight tag, basketball, parachute games or water balloon fights, she is proud knowing that kids are entertained.

Many view her as a second mom. For example, her daughter Sydney has formed a special bond with a carpooling buddy named Maddie Boyd (the daughter of Michelle Boyd who nominated Courtney). Sydney and Maddie instantly connected in cheerleading. Although they attend different schools and live in different neighborhoods, they’re like sisters because they hang out together so much.

Since Sydney is surrounded by three brothers, Courtney admits she’s sort of adopted Maddie into her family for more girl power. Courtney can relate to feeling outnumbered by boys since she grew up with four brothers and one sister.

She lives by the phrase, “What’s one more?” as she invites her children’s friends to go with them on nature walks, to baseball games, Conner Prairie and the zoo.

“When we were brand new to the neighborhood, Courtney made us feel very welcome right away,” says Kelly Anderson, friend and neighbor. “She invited our family over to her house for cookie and ornament exchange. My son, Jake, and Courtney’s son, Evan, quickly became best friends. She treated Jake like her own son with loving care and kindness. She took him to the YMCA to swim with her kids and to My Gym to play when it was cold and snowy….She helped me big time when my twins were born four years ago. She watched my two older kids, so I could go be with the twins in the NICU.” 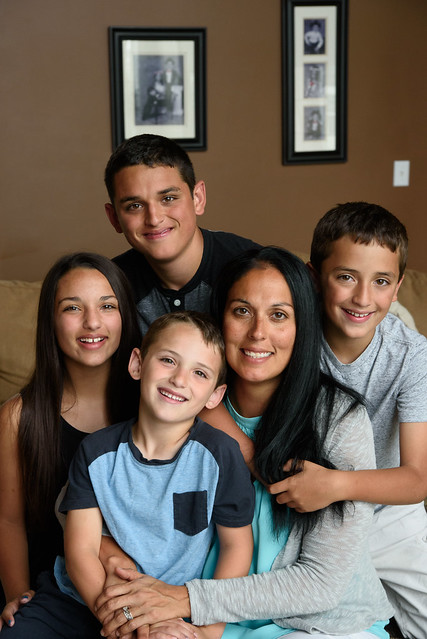 Her main philosophy is to let children have joy and live in the moment, get dirty and have fun.

“If the kids want to play the Pie Face game or create art projects, I would rather see them have fun for that one instant than to worry about the mess it will make….It’s not an inconvenience to live in the moment because of the benefit in the long run.”

She attributes much of her values and beliefs from her own mother who had six kids in nine years. Growing up in Fort Wayne, she remembers there were always kids at her home, and her mom always had homemade cookies for everyone. “Mom always made room for somebody which is second nature to me.”

Courtney’s past experience as a nanny has also helped shape her into the mother she is today. She used to nanny every summer for about six years at Lake Wawassee for various families. She can’t believe she used to get paid for having fun rollerblading, swimming, turtle hunting and so much more.

Courtney refuses to take all the credit for having such awesome kids. She brags about her husband as part of their team efforts.

“He’s an amazing dad. He always finds time to talk with our kids, coach them and teach them life lessons….He makes games out of everything. He is so creative and fun.”