Gabbi Schnaiter: On Fire for the Tigers 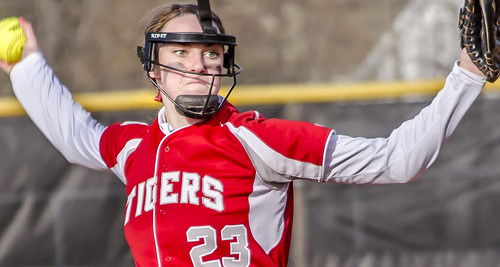 Gabbi Schnaiter pitching for the Tigers

Google the name “Gabbi Schnaiter” and three pages of results apply to the Fishers High School Softball pitcher. Results with phrases like, “On Fire”; “Big arm swing and can really bring it”; and “Scoreless Innings” follow or include her name. And rightfully so. Gabbi gave up only three hits out of 33 batters for the highly combustible and competitive Fishers win over HSE at the May 9 Mudscock game.

Obviously the girl can throw the ball. After all, she says pitching is in her blood and as early as 9 months old was toted out to Arizona to watch her own dad pitch and catch in the men’s Senior League Baseball World Series. Yes, the girl can hit the ball, too, drawing spectators to watch her developing skills when she was as young as 8 years old. But it is her tenacious spirit and drive, sportsmanship and dedication to her sport and her family that single her out as one of the next big things to come out of the Fishers community.

Gabbi traveled up through the ranks beginning with T-ball at age 4 to HSE S.P.O.R.T.S. and the natural progression to travel softball, and she is now a varsity stand-out at FHS—as a sophomore—already being recruited by Division 1 schools. She is as humble and grounded a kid as you will ever meet. And not just a one-sport wonder either; she continues to play travel softball at a collegiate showcase level, played club volleyball for Team Indiana for four years, and is also a member of the Lady Tiger JV Volleyball team.

“Gabbi is the real deal,” offers FHS Softball Coach Lauren Glaso. “She works just as hard on the off-season playing travel ball and lifting weights. She is buying into the process of knowing what it takes to make a good team great. She is selfless,” says Glasco. And apparently focused, as well, doing whatever it takes to juggle the lessons, practices and tournaments that encompass a minimum of 15-20 hours a week. Not to mention the homework this honor roll student often completes during drive time while also embracing her family responsibilities. 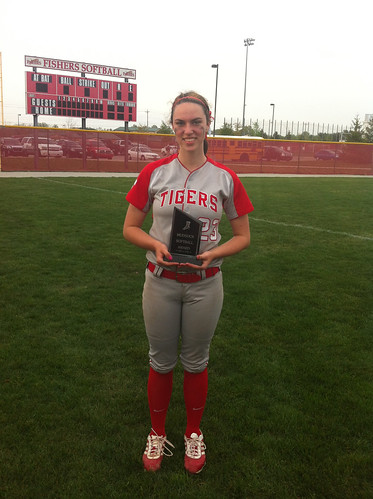 Amazed but not surprised by her almost innate talents on and off the mound are huge supporters, parents Sean and Raina Schnaiter. Sean was a collegiate pitcher and coach and is helping her navigate the waters of the opportunities that are being presented to her. Sean admits to being impressed with her maturity on the mound, while Raina gushes about the palpable unconditional love she shows to her three siblings, the youngest of whom is recovering from complications of autism. “She is truly their biggest fan and always wants to go to their games and be involved in the therapies and their lives. We are so happy for her and excited to be along for the ride on her amazing journey.”

With the Lady Tigers’ record at 14-4 and the season in full swing, much is to be revealed, both for this team and for the future of #23, Gabbi Schnaiter. But this much is certain: her moral compass is set in the right direction. Hard work, time management, family values, good friends and an occasional stop at her favorite sushi joint make for a well-rounded daughter, student, and sister, and most remarkable softball sensation.

Some Big Shoes to Fill