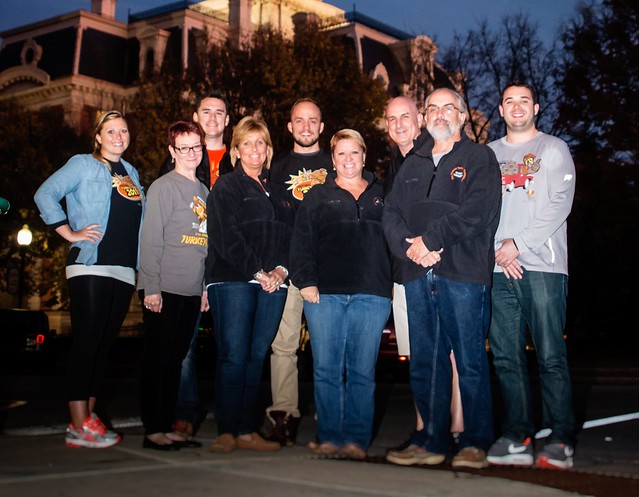 The Michael Treinen Foundation 8th Annual Turkey Trot will take place Thanksgiving Day, Thursday, November 26 at 9 a.m. This special holiday tradition held at Noblesville Downtown Square will include a 5K Run/Walk and 3K Family Walk. Why not have fun burning calories in the morning before you feast later that day? The top 10 men and women of the 5K will each win a pie to take home to share with their Thanksgiving table!

Registering for the Turkey Trot is a great way to start the spirit of the holiday season. It’s rewarding to know that you supported the community as 100 percent of the proceeds will go towards various philanthropies such as Riley Hospital for Children and the Leukemia and Lymphoma Society (LLS).

Hurry and register for this fun-filled event. Dri-FIT long-sleeved shirts are guaranteed for participants registered by November 1. Go to TheMichaelTreinenFoundation.org to sign up.

“The Turkey Trot is a timed event to meet the needs of the competitive runner and yet is also casual if you prefer to stroll through the park,” says Kelly Treinen, mother of Michael who lost his battle with cancer in 2008 at 19 years old, just six days prior to his 20th birthday.

“Michael was very energetic, athletic and a people-person,” she says. “He was a giver who cared about others.” She reflects back to when he once drew a picture for a little girl named Taylor at Riley where he also was a patient at the time. He traced a turkey with his hand using his thumb as the head and his fingers as the feathers.

He wrote “Happy Thanksgiving” and signed his name before presenting it to her. She never forgot this simple act of kindness, and neither did her parents. After Michael passed, Taylor’s parents gave the picture to Kelly reminding her of his compassion that lives on in everyone’s hearts who were lucky enough to know him. This same picture is displayed every year on the race day T-shirts.

“Since he was so into fitness and played three sports in high school, Michael found mental and physical strength by continuing to work out whenever he could during his chemotherapy treatments,” says Kelly. “Michael wanted to make a difference, so he started the Moving Through Treatment campaign where his focus was to purchase exercise equipment for the teenage patients at Riley that could be used in the Physical Therapy room or in the patient’s rooms. Several exercise bikes were purchased and can be seen throughout the fifth floor at Riley.”

The impact Michael has made on his community should come as no surprise since his mother is exceptionally driven to help others when she can. Kelly works as a Principal of Promise Road Elementary in Noblesville. During my interview with her one day after school, I learned she was scheduled to give blood immediately following our conversation. Moreover, Kelly was recently awarded the 2015 Indianapolis LLS Woman of the Year, raising a little over $87,000 in just 10 weeks.

“I had such a strong team,” she says humbly. “This was such a rewarding experience made up of family and friends. My neighbor and friend Chris Yeakey promoted this and convinced me to run. He and the other people on my team are the true reason I won.”

“The Turkey Trot wasn’t my idea,” she says. “It was actually Chris who thought of it. He saw how my daughter, Meredith, was involved with her Team in Training program [LLS Fundraiser] in memory of her brother.”

Yeakey suggested that they host a 5K event on Thanksgiving Day in their neighborhood. This event was successful with about 50 people attending and $800 raised for LLS. The next year, the race grew to about 300 runners. By the third year, the race was moved to Noblesville Square with close to 1,500 people.

“We do not just raise money for LLS,” says Kelly. “The Turkey Trot also benefits the Sparrow Club of Indiana, the Michael Treinen Foundation and the Doll Program to Riley Hospital for Children. It provides direct support to families and has supported the Angel of Hope [a memorial for children that have passed away].” The Doll Program involves giving American Girl Dolls and outfits to Riley patients. Kelly hopes to add a “boy component” this year by giving Legos to patients.

The Michael Treinen Foundation supports the National Bone Marrow Registry, Be the Match, LLS, Riley Hospital for Children and the Sparrow Club of Indiana and also awards four athletic scholarships for Noblesville High School each year.

The Treinen family members all help to organize the Turkey Trot. Kelly and her husband, Tom, are Executive Board members along with their three daughters, Meredith (30), Madeline (22) and Michele (21). Incidentally, Michele does the artwork for the banner.

“All of the board members represent key people in Michael’s life and help make the race a festive event,” says Kelly. “Each year, we have a balloon display that portrays the theme of the race T-shirts. One year, it was a red truck because Michael used to drive one. The balloon sculpture is placed at the cemetery which is along the route on Monument and 17th Street.”

Kelly is gracious for how the Noblesville community has stepped up to help her family in so many ways. The Turkey Trot is about new tradition for our community in memory of a young man who lost his battle with cancer but brought a community together for a common cause.

She says, “We are keeping Michael alive in our memories.”

If you’re interested in volunteering or being a sponsor for this event, please contact Kelly at tktreinen@gmail.com.

To make a donation to the Michael Treinen Foundation, checks can be made out to:

The Legacy Fund The Michael Treinen Foundation and mailed to 7028 Oakbay Dr., Noblesville, IN 46062.

Go to TheMichaelTreinenFoundation.org to learn more or to register.