Not in my neighborhood! That’s what Geist resident Jennifer Bennett and her neighbors are saying to another couple’s petition to develop an area around 96th and Mollenkopf Road into a commercial zone. 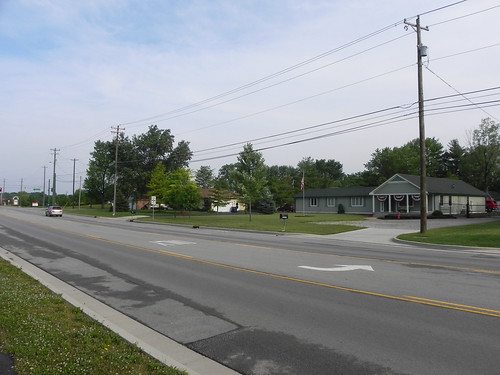 Homes along East 96th Street from Mollenkopf to the Fall Creek roundabout would have been leveled to make room for commercial development.

Petitioners Randy and Diane Campbell, who own two plots of land in the neighborhood, petitioned the Fishers Town Council to rezone the property to allow for commercial development. The petition cited that the land is no longer suitable for residential use after 96th Street was expanded, leaving residents with minimal landscaping and front yards. The Campbells go on to state that the well and septic systems in the adjacent neighborhood are failing, causing drainage problems. Now, the couple wants to sell the land and rezone it to allow for commercial development. The proposed developer, Alboher Development Company, revealed they have already received bids from two national retail chains.

But, just like with the addition of the unsightly billboard at 79th and Fall Creek, the petition was met with opposition. “Changing this area to a commercial zone devalues our properties, increases crime and leaves empty commercial space,” says Jennifer Bennett. At the hearing, many of her neighbors agreed, citing additional concerns such as noise and traffic congestion. Resident Denise Miller expressed concern about the private agreement among the owners of the 11 properties in the rezone. Like Miller, Patrick Klein expressed opposition to this proposal in which much is unclear and not fully disclosed. Miller also added that after a rezone, homestead exemptions would no longer apply, causing taxes to rise. Miller was also concerned that once properties are rezoned to commercial, the residents cannot build homes in that district and may face problems acquiring loans.

Ultimately, the Campbells withdrew their petition when it seemed the chances of an approval were slim. Although this is the second successful Geist-area protest, the neighbors aren’t ready to breathe a sigh of relief yet. With the road expansion and constant updates in the area, change will inevitably keep coming. Jennifer says, “If a petition to rezone the area arises again, I will fight it with just as much energy. This is my home and where I’ve chosen to raise my family.” Overall, Jennifer says she trusts the Council members and planners in Fishers to look at the whole picture and do what is right to make sure no harm is caused to property owners.