There are many inspiring groups in the fight against breast cancer, but one local group is focusing on breast cancer survivors and their road to recovery.

So what does fly fishing have to do with breast cancer recovery?

Well, apparently, it has a lot to do with “casting a line.”

The group was founded in 1996 by an East Coast breast cancer reconstructive surgeon named Dr. Benita Walton and Gwenn Perkins, a professional fly fisherwoman. Walton saw that casting a line was a motion that mimics the exercises surgeons prescribe after surgery or radiation to promote soft tissue stretching. 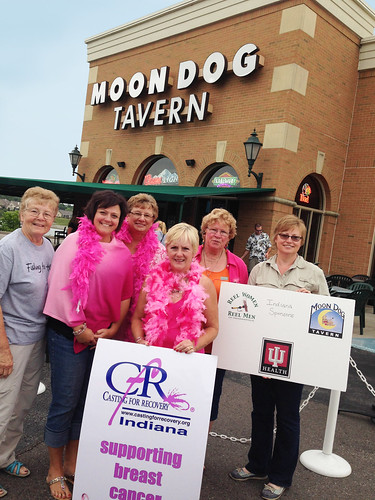 “It’s just a great program,” said Carmel resident Mary Smith, who learned of the group while she was fly fishing in Michigan.

“I met these women who were having so much fun—they were away from hospitals and enjoying the outdoors,” Smith laughed. “I went home and told my husband we need this in Indiana.”

Smith, who is not a breast cancer survivor started the local chapter with friend Barb Simpson and organized its first retreat in 2004. They said they have enjoyed the ripple effect ever since.

Geist resident Deb Hire is a breast cancer survivor who enjoyed a retreat in 2006. “I wish every woman in Indiana could experience the retreats,” Hire said.

Sponsors are catching on and coming on board including Midwest Sisters on the Fly, Clay Terrace of Carmel, IU Health North, Reel Women – Reel Men of Indy and Moon Dog Tavern. Moon Dog Tavern is also where the summer fundraiser that took in approximately $400, enough to send four more on a retreat next year.

Applicants are chosen through a lottery system and sent to the Wooded Glen and Conference Center located in Henryville, Ind., where lakes are stocked with bass, catfish and bluegill for catch and release fishing.

“The women are usually meeting for the first time, and sometimes they are a little shy about fishing,” Smith said. “But, by the end, typically, they are catching fish and making new friends. I like to say the women come to the retreat as rosebuds and leave in full bloom!”

Casting for Recovery will celebrate its 200 alumni member group with a reunion on Sept. 27 at the Lake Haven Campground in Indianapolis.For more information, visit CastingforRecovery.org.