The phrase “farm to table” is a real possibility to Greenwood residents who have discovered Indy Family Produce and Moody’s Butcher Shop. Both these business offer products grown and raised nearby. Smart consumers are realizing that when they buy local goods, fresh really does mean fresh. Not only is the taste more delicious, but valuable nutrients are still present in foodstuffs that have not been sitting on a truck for several weeks. Vegetables and meat grown and raised locally have a short timetable from harvesting to fork, which negates the need for preservatives that industrial farming operations use.

Cathy Richards, business development manager for Indy Family Produce, explains how the produce they sell wholesale is handled, “There is less than a 24 hours period between the time it is harvested and the time it is delivered fresh and served on the table.” The business also maintains a retail farm stand at 110 Bluffdale Drive. In July, the company was informed by the United States Department of Agriculture (USDA) that they had become Good Agricultural Practices (GAP) certified. Obtaining this certification is a long process and involves being audited and inspected by the USDA. The Richards family has been farming since 1943; they grow grains, but after seeing a need in the community for fresh, organic vegetables, Indy Family Produce was born. Richards commented, “I thought it would be our sweet corn, but we have become known for our lettuces.” They also cultivate a wide array of vegetables ranging from tomatoes, squashes, and peppers to members of the onion family like shallots and leeks.

Food this fresh shines on its own; it does not need a lot of spices or ingredients to make it taste great. Indy Family Produce’s butternut squash and beets with shallot vinaigrette is a delightful autumn side dish especially when served on their colorful rainbow chard. The following recipe serves four.

Preheat oven to 400o. Wash the beets, trim the ends and wrap them in foil. Cut the squash in half, scoop out the seeds, and place on a baking sheet. Bake beets and squash until tender, about one hour. Remove from oven, skin and chop both beets and squash. Place on bed of rainbow chard. Peel and mince shallot. Whisk shallot, oil, lemon juice, salt, and pepper together. Drizzle over the vegetables. 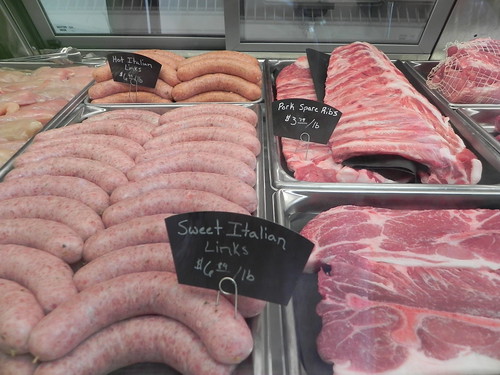 Moody’s Butcher Shop, 862 South State Road 135, sells local products from nearby sources as well as meat raised on Lone Pine Farm, their five-generation family farm. Their animals are not fed genetically modified food with added hormones or antibiotics, but only grasses and grains grown right where they graze. This summer, owners Adam and Lucy Moody were recognized for their efforts to farm sustainably by receiving the Agrivison Award from Lieutenant Governor Sue Ellspermann at the Indiana State Fair. This award recognizes those involved in Indiana agriculture for vision, innovation and leadership in the industry. As well as selling their own meat and eggs, Moody’s Butcher shop offers an array of merchandise from the surrounding area ranging from duck fat and frozen all natural cookie dough.

Moody’s is known for its nitrate free bacon and on a recent visit clerk Reba Denman enthusiastically gave some suggestions for using it in a couple of her favorite dishes. Each of the following recipes serves four hungry people.

Cook the bacon until crisp. Set aside and leave two tablespoons of oil in the pan. Rinse, cut the rib out and chop the kale leaves. Sauté the kale in the pan along with the vinegar and pinch of sugar. When hot and wilted, place on serving dishes and crumble the bacon on top.

Preheat oven to 350o. Rinse, dry and butterfly chicken breasts. Cut each pepper in half, seed and place one inside each breast. Wrap each piece with two slices bacon. Bake for 55 minutes. Brush one-tablespoon barbecue sauce over each breast and bake five minutes more.

Fresh Food is Nothing New