A long-awaited study on the current status of Geist Reservoir was released by the City of Fishers painting an optimistic outlook for the 71-year-old lake. Consulting firm Cardno JFNew completed a $100,000 study commissioned by the Geist Impoundment Fund last February. Fishers’ Mayor Scott Fadness says the study was an important first step to deciding the future of the area’s greatest resource. (Download Report PDF)

“There was a lot of misinformation going around,” said Fadness. “We decided to start with an assessment of where we are from a third party, objective position.” 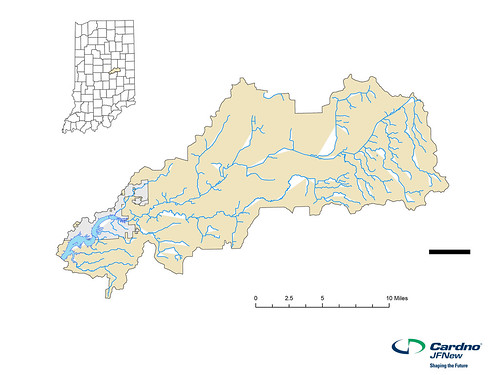 The report entitled “Geist Reservoir Restoration Long-Term Capital and Maintenance Plan” is 187 pages long and details the findings of a year-long study that looked at the entire 140,194 acre watershed which stretches as far northeast as Anderson. Readings taken last summer were compared to previous readings dating back to 1991. In the end, the report finds that phosphorous, which is present in the sediment under the lake water and continues to pour in from the upstream watershed, is the biggest limiting nutrient and largest driver of water quality.

However, the biggest surprise in the report is just how to eliminate the phosphorous, and in turn control unwanted vegetation like blue green algae and Eurasian Milfoil. Studies show that over 82 percent of the phosphorous pouring into Geist Reservoir each year comes from cropland in the watershed. To mitigate the biggest culprit of incoming phosphorous, farmers in the watershed would have to adopt no-till and stream run-off best practices. 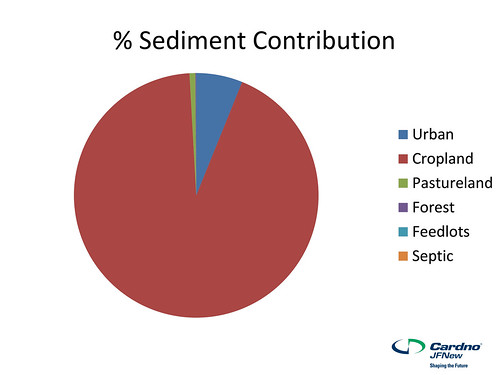 Most of Geist’s phosphorous load is coming from cropland in the 140,194 acre watershed.

Cardno JFNew’s summary stated, “The implementation of various best management practices throughout the watershed would reduce phosphorus, but would produce little or no improvement to the water quality of Geist Reservoir.”

“According to the report, even if you could get half of the farmers to adopt these changes, the difference in clarity in the water is only a few inches deep,” added Fadness. “You could literally spend millions of dollars and still not make a dent in the problem.”

Brian Hall president of the Geist Lake Coalition – which has been leading the nonprofit’s initiative to treat Geist Reservoir with chemicals to combat invasive aquatic plants – was also surprised by the report.

“We were surprised at how little we can actually move the clock back in time,” Hall said. “We believed there could be more of an immediate impact by reversing the rise in nutrient loads by best practices among others; however, scientists are telling us otherwise.”

The issue at hand is the phosphorous already covering the bottom of Geist Reservoir after years of sediment loading from the watershed. Chemical treatments can knock the unwanted weeds down each year, but the problem will continue year after year until the sediment is removed.

One piece of good news for Geist residents, the overall health of Geist Reservoir, “appears to be static with little further decline expected to water quality.” This was welcome news to all of the major stakeholders in the Geist Reservoir discussion, especially the City of Fishers. Fadness was relieved to hear that the odds of Geist becoming toxic are relatively small, but he also adds “the recreational issues will not go away on their own.”

Long-term prognosis – according to the report – is to continue chemical applications and start dredging on the north end of the reservoir. This area east of the Olio Road bridge near 113th and Olio Road has been a concern for recreational users as well as Citizens Energy, the utility company that owns the water and has the biggest stake in the lake’s capacity.

Citizens to Begin Dredging this Summer 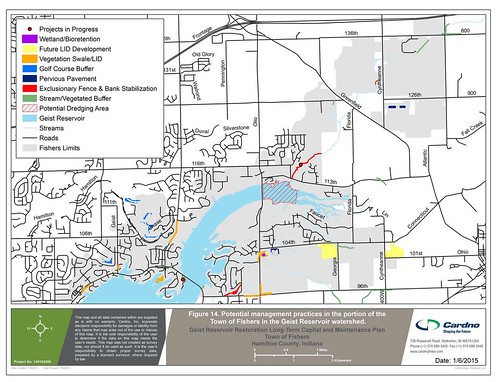 Citizens Energy is planning to dredge the north end of Geist Reservoir (shown in the red cross-hatched area) this summer.

According to Jeff Willman, executive director water operations at Citizens Energy Group, dredging the north end of Geist should start this summer.

“Much of that area has been lost to silt and sediment over the years, we’d like to dredge that area to stop the continued loss of capacity,” said Willman in an exclusive interview with the Geist Community Newsletter.

Willman stated that Citizen’s has been in discussions with the Geist Lake Coalition, City of Fishers and state regulators to fine tune a maintenance dredging plan. The study reinforced what Citizens has known for years.

“We’re not sure what type of dredging we will do just yet, whether it will be mechanical or hydraulic, but either way we plan to start this year,” added Willman.

As for the depth that Citizens plans to achieve or where the sediment will be moved to, Willman was unsure at this juncture.

Where Do We Go From Here? Since the January 2014 Geist Community Newsletter story entitled “Saving Geist Reservoir,” the notion of setting up a Geist Conservancy District has been a topic of conversation amongst stakeholders around the lake. A special taxing district, similar to the one set up at Lake Lemon in southern Indiana, would assess usage fees, dock fees and/or property tax assessments to homeowners living in the defined district. All the fees collected are then used to maintain the reservoir and pay for dredging, erosion control, security and chemical treatments.

“I do not like the idea of putting additional property taxes on residents to pay for this, I’d rather try to get enough money from user fees,” said Fadness.

Pete Peterson, president of the Fishers City Council and representative from the Geist Southeast District, sees the conservancy district differently.

“If the conservancy district was supported by the residents, we could then maintain Geist Reservoir at the highest levels we can,” said Peterson. “This isn’t a Robin Hood tax where we take from one party and someone else enjoys the benefits, this tax money would be spent right where it comes from.”

Leading the charge and acting on the lake clean-up has been the Geist Lake Coalition. Through a series of door-to-door solicitations and arm bending, the group has been able to raise thousands of dollars from homeowners and businesses to treat the lake for algae and Eurasian Milfoil. According to Hall, they have a huge obstacle each year.

“Funding remains our biggest challenge as there is no one agency, governmental entity or utility that bears responsibility for the reservoir,” Hall said. “Ultimately, the cost falls on the stakeholders and homeowners’ shoulders. We must identify a sustainable revenue stream that is fair and equitable for everyone. A conservancy district allows us to gather user fees such as dock and boat stickers in addition to property assessments.”

AquaLaurus, as Merritt calls the group in his white paper, would have no legislative power, but would be able to make recommendations, conduct studies and help educate people on the growing issues around Indiana’s water supply. This does not mean that Indiana is concerned about shortage in its water supply, but rather that Indiana has no central entity to oversee the water.

“If there was a problem on Geist Reservoir or Fall Creek, we could go to a lot of places to have a study done,” said Merritt. “My legislation creating a statewide water institute—AquaLaurus—is a critical approach that’s long overdue in Indiana to focus on the State’s overall water policy. It will provide some concentrated pool of expertise to emphasize long term strategies for water management and water policy statewide.”

Merritt went on to explain that AquaLaurus would compliment conservancy districts with water management tools.

“AquaLaurus is not a replacement for the need for conservancy districts at the local or regional level. Conservancy districts provide critical focus on the local level and they empower residents to be able to maintain and strengthen water resources focusing on the health, use and the recreation of the water provided. The citizens around the Geist Reservoir should strongly consider creating a conservancy district that would have the authority to enable the people closest to the issues to resolve them.”

Senate Bill 410 has been referred to the Environmental Affairs committee, where they can hear testimony from those supporting or opposing the bill. From there the committee will vote on the bill to decide if it will go forward or not.

Where Do We Go From Here

While Merritt’s Senate Bill 410 goes through the Indiana legislature this session, local lake stakeholders are also moving towards the formation of a conservancy district. Dredging by Citizens Energy is merely addressing one small area of the lake while the rest of Geist Reservoir, especially those areas with shallow coves and docks, are in dire need of on-going maintenance dredging as well. The only sustainable model for ongoing lake maintenance is the establishment of a conservancy district.

At question will be the boundaries of the district. Which neighborhoods, cul-de-sacs and private drives will be in the district and which ones will be excluded. According to Matt Troyer, attorney for Bingham Greenebaum Doll LLP, spreading the costs across more homes lowers everyone’s financial responsibility.

“Some think only the lakefront homes should be in the district, others say only those with docks, and others seem to think that entire neighborhoods should be included. It’s going to be a fair debate to discuss the scope and breadth of the conservancy district.”

In the meantime, the Geist Lake Coalition plans on passing the hat for chemical treatments again this spring. Hall admits that chemicals are merely keeping the weeds and algae at bay, but the real solution is to do ongoing dredging which is far more expensive.

For more information about the Geist Lake Coalition, visit their website at GeistLake.org. For updates on the AquaLaurus Senate bill, conservancy district formation and to download the full report on the current status of Geist Reservoir, visit atGeist.com.