Representatives from the new IKEA home furnishings retail store in Fishers will be getting out their celebratory saw on Wednesday, October 11 when the store officially opens to the public at 9 a.m.

Yes, a saw – you read that correctly. In lieu of a traditional ribbon cutting, Sweden-based IKEA commemorates each new store opening with an official log-sawing ceremony.

After officially filing building plans with the city of Fishers back in November of 2015, IKEA will celebrate its grand opening less than two years later with furniture giveaways, live music starting at 6 a.m., and a formal ceremony featuring the raising of the American, Swedish and Indiana flags and brief remarks from IKEA representatives and public officials. The store is the company’s 45th in the U.S.

Customers can begin lining up to enter two days in advance of the 9 a.m. opening for the freebies and festivities – the company welcomes tents and sleeping bags, and employees typically even organize games and activities to help pass the time for those willing to wait for long stretches. If past grand openings are any indication, the store will give out a number of free sofas corresponding to the number of U.S. IKEA stores. 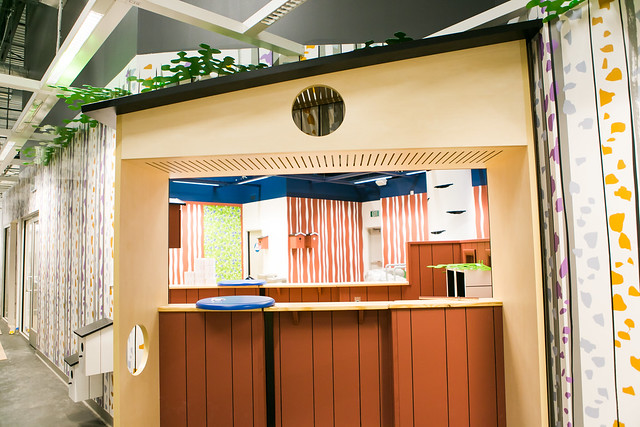 While the company has not announced giveaway details for the Fishers grand opening, giveaways at past openings throughout the U.S. have included armchairs, mattresses and gift cards, as well as free home delivery for those making purchases on the day of the opening.

Founded in 1943 in Sweden, IKEA specializes in affordable and mostly unassembled furniture, appliances and home accessories at more than 390 stores in 48 countries. Roth says the Fishers location, at the 116th Street exit on the east side of Interstate 69, seemed like a no-brainer when the company was seeking out the right spot for its next U.S. store a few years ago.

“Whenever we’re looking for locations for an IKEA store, we’re looking for good freeway access and visibility,” he says. “The access there on I-69 is just so easy. We wanted it to be fairly accessible to all points within the metropolitan area.”

The 289,000-square-foot store, which sits on 35 acres, features solar panels on its roof, a children’s play area inside and a restaurant that seats 325. Roth says the 250-plus employees hired for the store are mostly locals – including Indiana native Holly Davidson, who will serve as store manager – and a few transfers from other U.S. IKEA locations.

“The city of Fishers was very organized with a clear vision,” Roth says of the planning and construction process. “They had already planned for addressing infrastructure support for anything that could go in that location, so it seemed like a great fit. People around the city are very excited and welcoming for IKEA. Many of them have shopped at other IKEA stores and recognize how it can increase the draw to other businesses in the area.”