Jeff Lantz, board member of the Geist Impoundment Fund, and Jason Taylor, Project Manager from the City of Fishers, meet at the Fall Creek Road trail which will be widened to 10′ for 1.6 miles, connecting the new roundabouts at 96th and Brooks School Road.

Walkers, runners and bikers along Fall Creek Road will be happy to see the much-anticipated multi-purpose trail project start construction in mid-October. Connecting the two new roundabouts, the 1.67 mile asphalt trail will be 10-feet wide, allowing for two-way pedestrian traffic. Total price of the project is approximately $2 million which is coming from the $3.7 million “Geist Impoundment Fund” set aside after the 2010 annexation of Geist by the Town of Fishers.

“It’s wide enough to get us the ability to have two way traffic, so you’re not on a four foot wide concrete walk like some of that portion around Geist and Masthead along Fall Creek [Road], and maybe you have to stop to make sure you don’t run into somebody,” said Jeff Hill, Director of Engineering for the City of Fishers. 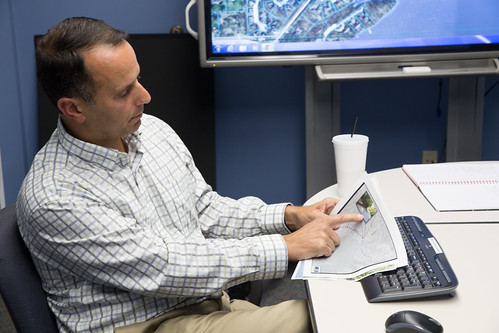 Director of Engineering for the City of Fishers Jeff Hill goes over the plans.

The paths are multi-use, so walking, running, rollerblading and biking are allowed on the paths. But any sort of motorized vehicle is not allowed – this includes mopeds and golf carts.

“That gets the pedestrians and the recreational bicyclists off the road,” said Hill.

Butler, Fairman and Seufert Civil Engineers created the project plan which calls for the replacement of three wooden boardwalks along the road frontage, a new observation platform at the Geist Road causeway, trail signage, newly designed turning lanes at most Masthead entrance drives and new retaining walls to replace the aged wooden timbers. The plans are being bid out by the City, and construction is scheduled to begin this fall.

“We have a few trees to clear down by the boardwalks near 96th Street and some utilities to move which we can get started on after October 15,” said Hill. 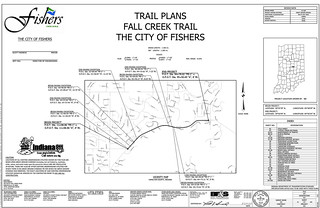 One of Geist’s newest residents and Fishers engineer Jason Taylor will be the project manager. He lives just off of Fall Creek Road and often runs along the current trail.

“You might say I have a vested interest in making this project go smoothly,” Taylor said with a grin.

Hill anticipates construction to begin on the northeast end (near the Brooks School and Fall Creek Road roundabout) and continue southwest in sections.

“By tackling this in sections, it will minimize the disruption to traffic as much as possible,” added Taylor. 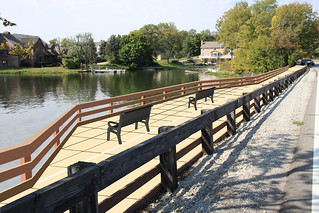 Geist Impoundment Fund board member and Canal Place resident Jeff Lantz is happy with the projects that their committee has recommended. Besides the two new Fall Creek Road roundabout sculptures at Brooks School Road and 96th Street, their committee was also behind the wiring and lighting project nearing completion on the Fall Creek Road bridge.

“We’re hoping to have enough budget left over to add lights and electricity on the north end of the lake on the Olio Road bridge, but that project is on hold until the final bill comes in on the Fall Creek Road bridge,” says Lantz.

Taylor expects the project to be completed by August, 2016, with the majority of the project finished just in time for next year’s “Blast on the Bridge at Geist.”