Geist
Home›Indiana›Geist›Heart of a Champion 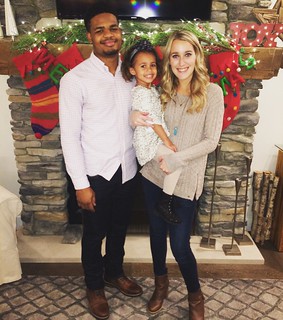 Kris Holland with his daughter Naomi and fiance Maura prior to his two cardiac arrests. Doctors gave him a 6% chance of survival.

On April 10, while playing basketball, 24 year old Kris “Lurch” Holland unexpectedly went into cardiac arrest. Immediately rushed to the hospital, his heart stopped a second time in the ambulance ride. He was on life support and in a medically induced coma, and was given a 6-10% to live.

Kris was kept at Methodist Hospital for 11 days, spending nine of those days in intensive care. After many thorough tests, it was found that he has catecholaminergic polymorphic ventricular tachycardia(CPVT). CPVT is a condition that causes problems with ventricular rhythm and causes sudden fainting and risk of death. The chances of being diagnosed with this condition are about 1 in 10,000.

“Kris is an amazing dad, and a great provider. He’s loyal, hardworking, faith filled and really just an all around good person.” Maura, his fiancee and mother of their three year old daughter, Naomi, said. “What makes Kris special is he is a walking, talking miracle. There is no other explanation for his survival. Statistics prove it. We are so blessed to still have him in our lives.”

Kris’ family is accepting donations to help with the massive $50,000 out of pocket medical bills that they face. You can donate at (click here) and 10% of the funds raised will go to Sudden Arrhythmia Death Syndromes (SADS) Foundation to raise prevention and awareness for those affected by SADS conditions.