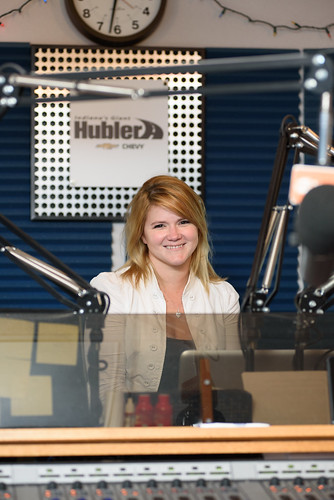 Toni Williams spent summers boating on Geist Reservoir, hanging out with friends and even performed in two productions with the Mud Creek Players. Her dad, Bob Williams, is still active with the local theater.

“’Wait Until Dark’ was the drama I performed in, and I cannot recall the other, but it was a comedy,” says Toni. “At the time, I was the right age for the part, and most importantly, I was willing to do it.”

After graduating from Lawrence North, Toni attended Indiana University, majoring in biology before switching to telecommunications. “Radio wasn’t my first thought of what I would do,” shares Toni. “I thought perhaps I would be in TV production.”

During college, Toni had an internship with WTTS which has studios in Bloomington and offices in Indianapolis. After graduation, she interviewed with WZPL. “I thought this would be a fun first work experience out of college until I got a real job,” laughs Toni, who is still working at WZPL 15 years later.

Toni started working in promotions and spent several years as part of the marketing team before she was offered the opportunity to work on the morning show. She’s been working with Dave Smiley for five years. “At the time I accepted the on-air job working with Dave, I had just gotten divorced, I had a baby and I wasn’t sleeping anyway, so I figured why not get up at 3:45 a.m. every day?” shares Toni. “Why not change every element of my life at once?”

Aside from Toni, The Smiley Morning Crew includes Will Pfaffenberger, Nikki Reed and Dave Smiley. They are a family on and off the air.

“Our show is based on some aspects of our personal lives, so when I was first on the air, my co-workers would make fun of all the photos I had of my son Lucas on Facebook and all the mom things I did. Now Dave and Will have babies, and they are doing all the same things that they used to make fun of me for,” shares Toni. 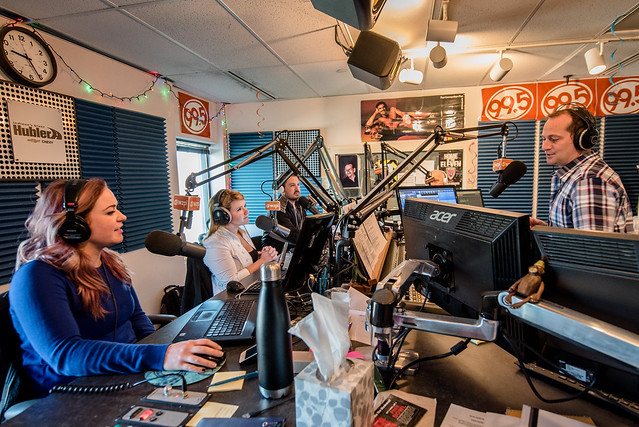 Nikki has a dog named Marbles, Will has a 9-month-old son, Lincoln, and Dave has a 16-month-old son Noah, but for many years, Toni was the only one with a child. Her son Lucas is now 5.

Lucas, unbeknownst to him, has been a part of the Smiley show since before he could speak proficiently. When he was 2 years old, Toni would record him singing a song, and listeners would guess which song he was singing, like Bruno Mars or Adele tunes. As Lucas began to talk, his talents took him in the direction of being their weatherman. “It was clear he was obsessed with the weather,” shares Toni. “It’s freaky to hear a small child speak beyond his years discussing detailed weather patterns.”

“He is such a weather nerd and is obsessed with the radar. At age 3, he said, ‘Mommy, look at this big front coming through!’” recalls Toni.

So naturally, Lucas gives the weather report on the air. In addition to the weather reports, Lucas has performed some raps on air about the Pacers and has a following. “He’s oblivious,” says Toni. “He thinks it’s normal doing the things he does. While many times his weather reports are accurate, he usually ends it with some kind of ridiculous 5-year-old toilet humor. Sometimes poop rain is in the forecast, or a windy day may be a giant fart day. But, you get what you pay for!”

With the show based on their lives, Toni experienced some challenges with being single. “There’s very little left to the imagination, and we are all comfortable sharing,” says Toni, who is now engaged. “It was definitely a drawback to dating.”

The fun doesn’t end for the morning show crew once they are done at 9:30 a.m. They are busy during the week and weekends with events. There are some regular features on the show like “Whatcha Doin’ at the Courthouse?” which even has its own jingle. The crew heads downtown to the steps of the City County Building and asks people the question, “Whatcha doin’ at the courthouse?” 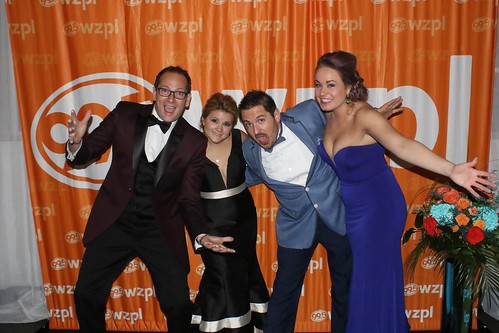 “We may be there [at the Courthouse] for three to four hours just to get three to four minutes of good sound bites for the show,” shares Toni. “The answers we receive range from hilarious to horrifying.”

Another fun day is spent at the IMS for Carb Day. Dave Smiley walks around interacting with the race fans, most of whom have been partaking in the consumption of alcoholic beverages. “That’s always entertaining,” says Toni.

“There is a high level of authenticity with our show. We are all goofy, and we don’t fake anything. Gratefully, we all get along really well,” says Toni. “We hang out outside of work, and it’s an extension of the fun.”

“Toni is awesome on the air, and she keeps the show working in the background with producing and booking guests,” shares Smiley. “I’ve known her the longest with the current team, and she is like family to me! I love her!”

Annual events for WZPL include the annual Birthday Bash June 24, headlining Iggy Azalea, Charlie Puth, Mike Posner and Troye Sivan. Their other major annual event is the Make-A-Wish Foundation of Indiana Request-A-Thon. This on-air marathon fundraising effort lasts for 36 hours December 1-2. In April, the Smiley Adult Prom takes place. Over 1,200 people over 21 get to recreate their prom night with the fancy dresses and tuxes and enjoy dancing and cocktails.

Inaugural Corn Hole for the Cause Raises ...