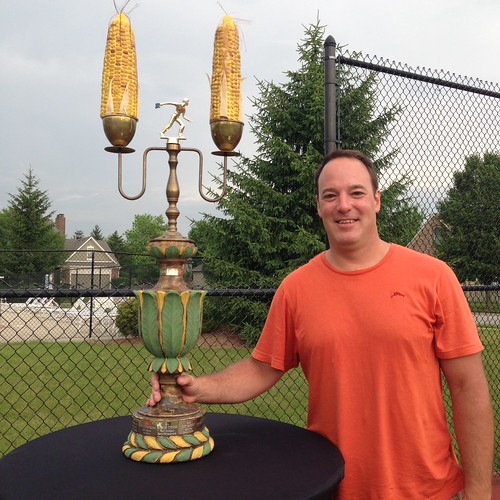 A lot of neighborhoods hold special events throughout the year, but, few throw an event quite as grand as the Annual Cornhole Tournament of Champions held in Admirals Landing. Now in its 6th year, the tournament (which the founder refers to as a “wicked awesome display of athletic talent and endurance”), is hosting a record 32 teams and has now become a charity event. I thought it was time to meet the founder of this event—the Godfather of Hole, Matt Hubbard.

As I pulled up to the tennis courts where the tournament is held, I spotted Matt next to a tall trophy topped with ears of corn, the coveted prize for the winner of the tourney.

“This is our Hominy Cup,” says Matt proudly. This is the 3rd version of the Cup. The original, in 2009, was lost in a divorce settlement and the second version lasted four years, 2010-2013) until a suspected act of vandalism rendered it structurally unsafe.”

Matt explains how the “lore of this athletic event” has reached new heights as players now dress in costumes for prizes, and sponsors such as Papa John’s, Subway, Lincoln Square, Geist Bakery, Eddy’s, and even Matt’s eye doctor, Bruce Burns, have come on board to help.

A neighborhood resident sings the national anthem and another throws the first pitch. “And to think all this started with a conversation over a beer,” laughs Matt, who is an employee benefits consultant at Hylant. 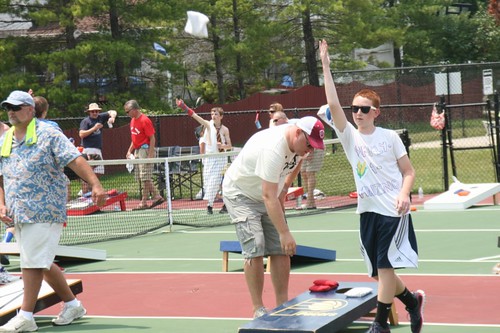 Players of all ages come out, mostly in costume, to compete in the local neighborhood cornhole tournament.

Along with the fun though, Hubbard, who hails from New Hampshire where they are more apt to pick up a game of hockey rather than cornhole, was looking for an opportunity to turn this annual event into something more meaningful and special.

He knew it was time when longtime Admirals Landing residents Emil and Sherin Khamis lost their 9-year-old daughter, Dounia, to cancer in 2010. “We all just wanted to do something special for them,” says Matt.

This year, proceeds from the tournament will be donated to the Dounia Khamis Memorial Scholarship Fund. Dounia’s mother, Sherin, is providing lunch for the athletes on game day.

“It makes a fun day a little more special,” Matt says with a smile.

The tournament will be held August 2, at high noon.

In the meantime, The Hominy Cup awaits…as participants gear up to toss for a good cause this year.

The British Are Coming

The Pint Room: One Hundred Taps and ...