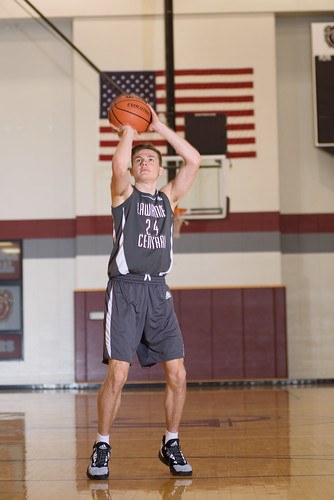 The historic and lavish Chicago Theatre in downtown Chicago hardly resembles a gymnasium.

In fact, there is nothing about the 95-year-old, seven-story facility that says basketball. Instead, the legendary theatre with the majestic lobby, spiraling balconies and grand staircases has hosted stage and entertainment performances from the past that featured music icons Duke Ellington and Benny Goodman and recent rock and roll shows by Van Morrison, Prince and Aretha Franklin. Future visitors include stage and theatre stars Adam Sandler, Cyndi Lauper and Carol Burnett.

Missing on the visitors list are names such as Michael Jordan and Derrick Rose.

That’s why heads turned in March when the promoters of the McDonald’s All-American Game decided to move its annual slam dunk extravaganza from the United Center (home of the Chicago Bulls) to the Chicago Theatre (home of Widespread Panic et al.). Pundits predicted disaster on this promotional concept.

But along came Kyle Guy, the electric 6-foot-2 guard from Lawrence Central. And thanks to the creativity and skills of the dynamic Guy, the gamble worked and was declared a “soaring success” by the Chicago Sun-Times.

No one in central Indiana should be surprised at Guy’s contributions to a dunking contest on a temporary court in a downtown Chicago theatre. Not only was Guy recently named the Gatorade Indiana Boys Indiana Basketball Player of the Year award, but he was just named Indiana’s Mr. Basketball.

And it was Guy who ignited the slam dunk contest in Chicago. On his final dunk, Guy teamed up with Georgian Kobe Simmons on striking a new and creative idea to battle those with decided height advantages. Simmons was dispatched to the balcony with a basketball. Simmons hurled the basketball down to the stage. The ball bounced, and Guy attempted to close the scintillating scenario with a wild, one-handed dunk.

“They tried four times, but Guy missed all four dunks,” reported Chicago Sun-Times Michael O’Brien. “But the sheer childlike wonder of watching two kids basically goofing around in a big, famous old theatre that once hosted Frank Sinatra was a spectacle…that few are likely to forget.” 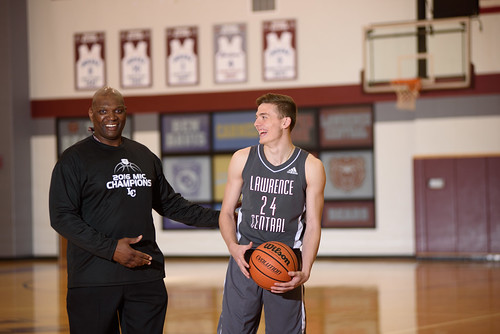 And few will likely forget the show that Guy put on during his four years of orchestrating the basketball program at Lawrence Central. After breaking into the starting lineup in his second game as a freshman, Guy became the director for the Bears on the basketball court.

“Kyle is the best shooter and scorer that I have seen in my 28 years of coaching,” said Bears coach Al Gooden. “He can shoot the three-pointer, hit the pull-up jumper and get to the basket to finish.”

After a slow start (going 0-9) under new coach Gooden in 2014-15, Guy and Lawrence Central finished on an upswing, closing 11-2 in the final 13 games. That pace sent a signal throughout Marion County that there was a new powerhouse in Lawrence.

The fairy tale season ended in a loss to North Central in the sectional final.

“That was my biggest disappointment in high school,” said Guy. “We [teammates] were all on the same page. It was a tough game.”

Nonetheless, it was a remarkable season for Guy and the Bears. In the three previous seasons, Lawrence Central was 0-15 against Indianapolis Tech, Pike, North Central and Carmel. Gooden credits Guy’s approach to the game as a key for the successes.

“His knowledge of the game is great, and this season, he became a leader for us,” said Gooden. “He learned at times he had to take over a game from a leadership standpoint. He learned that sometimes you have to be vocal. And he did.”

“I love the ways he plays,” said Lovell, former coach at IUPUI and Franklin College. “He is a scorer, but he is also very unselfish. He’s fun to watch because he plays with such passion. He is a throwback player who loves to play the game.”

Another witness to the rise of Guy has been Indianapolis Star sports writer Kyle Neddenriep who regularly follows both the high school and AAU circuit.

“Probably the biggest improvement was him becoming more than just a shooter,” said Neddenriep who witnessed several Lawrence Central games in the last two years. “There were several games where the three-point shot wasn’t even a part of his game. He was getting to the basket for himself or creating for his teammates. He was always talented, but he became a much better all-round offensive threat as a senior.”

Of course, Guy also entered his senior season as a man with a bullseye on his back. Not only was he a pre-season All-State selection, but Guy was a Virginia recruit. Opposing players and fans were quick to target the ACC talent-to-be with tenacity on the court and verbal jabs from the bleachers.

“Maybe in the past, opponents underrated him,” said Neddenriep. “But I don’t think anyone in the state underrated him as a senior. Everybody knew what he was capable of doing, and he still put up the big numbers.”

“It makes you try even harder,” said Guy when reminded of the derisive challenges from fans. “You want to proof them wrong, and it’s a thrill to quiet the crowd.”

For Gooden, he would ask – or demand – that his senior stepped up his leadership traits when the going got tough.

“He has an edge when it comes to the mental side of the game,” said Gooden, owner of over 400 wins at the high school level that includes stops at Fort Wayne Harding, New Haven and Lawrence Central. “He learned that there are times that a leader has to take over games.”

Gooden fondly recalls a particular play in the sectional when Guy took an inbound pass at one end of the court and rapidly dribbled to the opposite end. He then hit a running hook shot before time expired at halftime.

“He just knew what he had to do,” Gooden said.

Now Guy takes his game to the next level…probably the highest level in college basketball. It is called the ACC. Next winter, the opponents will be wearing Duke, North Carolina, Notre Dame, Louisville and colors of other schools of the fabled conference. After a visit prior to his junior high school season, Guy, ranked in the top 40 nationally, signed on with Tony Bennett’s Cavaliers.

“I fell in love with everything about Virginia,” said Guy, a B student at Lawrence Central.

And Lovell predicts a strong marriage between the Indiana guard and the ACC powerhouse.

“He has to get stronger. They will have him living in the weight room,” said Lovell. “But he is a perfect player for that style of game. He plays very well without the ball. He reads, and he reacts.”

For pundits, it is tempting to compare players to other performers. For instance, one national telecaster compared Purdue’s A.J. Hammons to NBA star Tim Duncan. Others have likened Yogi Farrell of Indiana to another Hoosier great, Isiah Thomas. When asked to compare Guy to another player, Greg Rakestraw of 1070 the Fan uncorked an interesting choice.

“My comparison is rather unique,” said Rakestraw who looked to hockey great Wayne Gretzky when talking about Guy. “He wasn’t any sort of athletic marvel, but he was a mental one. He would be one-two steps in front of everyone else on the ice in terms of play development. Not only did he know where the puck was supposed to go, but he knew where it as going to be before anyone else on the ice realized it. Kyle is the same way with the basketball.”

Perhaps someday they will be hurling hats on the court at Virginia.