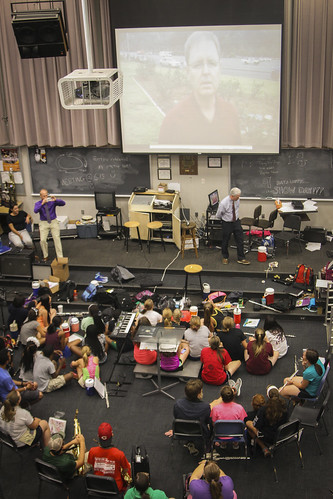 Students received word of their selection via a video announcement from the Tournament of Roses President that was played for them at the start of rehearsal September 10. The band was selected after a lengthy audition and application process that required a video portfolio and recommendations from esteemed music educators around the country. The parade committee goes through a three to four month process in selecting the bands each year for this historic and esteemed parade held during the New Year.

Students from the MPLT are comprised of high school musicians from both Lawrence Central and Lawrence North High Schools. During their inaugural season last year as a combined marching band, MPLT was a Class A ISSMA State Finalist and a Bands of America Grand National Finalist.

“The Rose Bowl festivities around the New Year are the epitome of the bowl season,” shares MSD of Lawrence Township Superintendent Dr. Shawn A. Smith. “For our children to be selected to participate in this once-in-a-lifetime experience is an honor for the entire community.”

About the Metropolitan School District of Lawrence Township
The 10th largest school district in the state, the MSD of Lawrence Township serves approximately 15,000 students across four early learning centers, 11 elementary schools, two middle schools, two high schools, a center for innovation and technology and an alternative setting high school. Recognized as an “A” district by the Indiana Department of Education, Lawrence Township is recognized as a “lighthouse” school district, a reputation built over the years based on the district’s award-winning staff, accomplished administrators, high-achieving students, supportive community and innovative educational programs. Visit our website at LTschools.org.