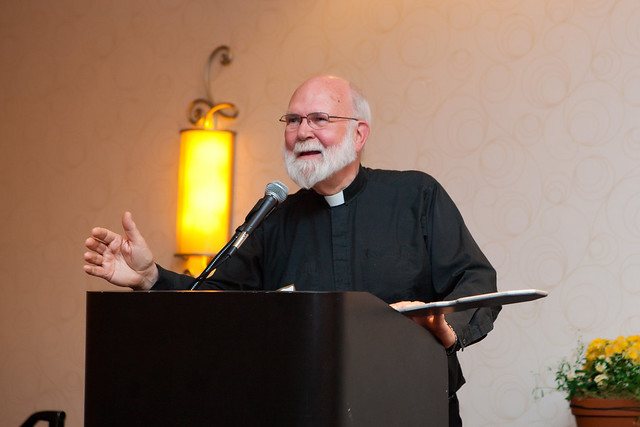 Fifty years ago, acting on an idea to become a missionary, share his faith with others, and perhaps feed his sense of adventure, Father Phil Bowers embarked on his journey to serve God as a priest. Now, on the occasion of the Golden Anniversary of his ordination, Father Phil, pastor of Holy Spirit Parish at Geist, has announced his retirement. Parishioners knew the time was coming, and perhaps chose to forget about it; perhaps many even prayed faithfully to the Holy Father that Fr. Phil would stay the father eternally. Many would describe the distinguished pastor as the rock and glue that holds the parish together. But, after serving the parish for more than 20 years, the end of an era has arrived.

We meet in Father Phil’s office to reflect on his time in the priesthood. As he ushers me in, I find it impossible to imagine a new leader. His office, adorned with a plethora of Purdue memorabilia; his persona, that of an eternal Boiler fan just as much on the altar as off. His homilies throughout the years have often been sprinkled with comments about the game, or about racing back from the game just in time to say mass. The Boilermaker banter is difficult for this Hoosier Alum and fan to hear. But I quickly remember the lesson on forgiveness and let it slide. We sit down to talk, and it seems parish life is carrying on as normal. It hits me that his days of active priesthood are waning, and I begin to feel a profound sense of loss. I lead off with a litany of pleas like, “But you’re too young,” and “It’s too soon.” True to form, Father counters with “Change is good. Without change, you don’t have growth.”

And growth is exactly what Father Phil has brought to the parish during his tenure. Upon his arrival at the parish in 1993, Fr. Phil launched his very first capital fundraising campaign. That first campaign took the parish from a few families meeting at a storefront on 96th Street to a parish of more than 8,000 families gathering in the beautiful building that now stands off Fall Creek Road. Since then, he’s overseen the construction of the education wing, the gym and parish life center, football and baseball fields, parish rectory and so much more. A monumental task for any pastor, Fr. Phil guided the parish through it with ease. Though he claims he’s not characteristically humble, he humbly says, “We got through it because we’re blessed with a tremendous amount of talent among the parishioners. They’re capable of doing everything. People were generous, and they sacrificed their time and talent to make it successful. Others handled design, colors and specs, so I was able to focus on the fundraising.” While Father Phil credits the incredibly capable, talented and generous parishioners, it’s undeniable that his fundraising efforts were so successful the parish was debt-free within two years after the church was constructed.

As Father Phil continues to sing the praises of the parishioners, I smile as I remind him that tremendously capable and talented parishioners are very passionate and have very strong opinions. I add that it takes a special leader to navigate that. He nods and grins widely in agreement and says, “It all works because we’re in a faith-friendly environment. It tempers things and reminds people that the church says life is sacred and we all are called to be respectful. So that’s what happens.” 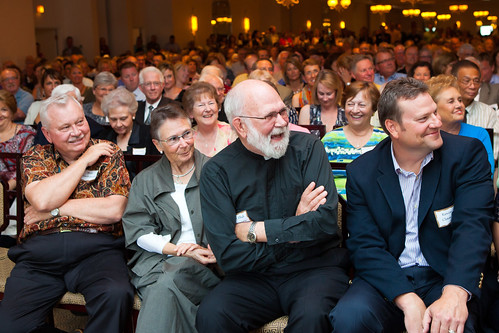 Just like the successes of the parish came together serendipitously, it’s clear there was a path that led Father Phil to Holy Spirit Parish. Although he often delights the parish with stories about his past as pastor at Purdue’s Newman Center, most cannot remember a time when he was not part of the parish. Like Jesus’ parables, the stories seem almost mythical. Father Phil explains that his stay on campus was supposed to last just four weekends. “I was assigned to help out while two of the four priests were completing their graduate degrees. I stayed 21 years and completed my graduate degree, too.” While the students were having the time of their lives, so was Father Phil. “I wasn’t an administrator in charge of fundraisers, so I had plenty of time to be with the students and minister to them. With 5,000 students at mass every weekend, there was never a dull moment,” he says. His ministry didn’t extend just to students. He says “I got to know professors, people in the athletic department, and often got invited to events with guest speakers.”

We reminisce about campus days a while longer, then he takes me back to another wonderful time in his priesthood, his time at Immaculate Conception Baganga Parish in the Philippines. “It was a wonderful time. The people were the most delightful I’d met,” he begins. He describes how the Filipino culture, being very religious and incorporating expressive devotions and processions, taught him a lot. “The Filipinos showed me how the relationship with God can be seen like God is a very good friend.” Father Phil says that although learning the Cebuan language was a challenge, everything about their kindness, welcoming nature and strong sense of family was wonderful and inspirational.

Now, after five decades filled with many exciting adventures and countless ministries, it’s time for the good shepherd to leave his flock. “I’m not leaving, I’m just moving down the street,” he reassures me. Which means, I will still pass him during my morning jog. He says he’ll stay busy filling in for other area priests, and meet new people while visiting other parishes for the weekend. The slower pace and the opportunity to get a broader vision of the whole diocese will be enjoyable, but he has a much simpler goal in mind, “I plan to make it to all the Purdue home games, tailgate, have fun and not have to race back to say mass.” 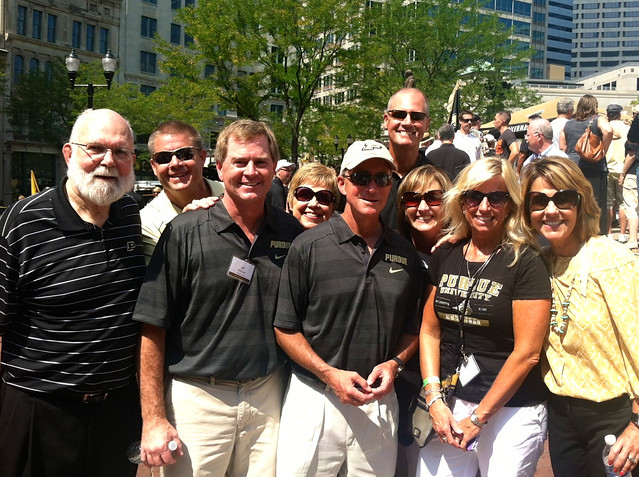 As he offers his final reflections on his priesthood, Father Phil says it’s all that he thought it would be and much more. “You can’t imagine what it’s like and what an honor it is to be invited into people’s lives to share in the most intimate emotions, the joys and sorrows of their lives in the most intense form. To earn that kind of trust is very humbling.”

Father Phil has surely earned that trust and more. He was chosen to serve two parishes, each for more than three times the length of a priest’s usual assignment. His absence at the parish will leave a deep void for some time to come. Though the new priest, yet unnamed, who follows him has gigantic shoes to fill (perhaps not unlike the famed red Bruno Maglis), Father Phil has some advice: “I’ll tell him he’s very lucky to have this parish. Ask what better looks like. Show them it’s time to trade up and put energy into what needs to be done.”

Sage advice indeed from the wise father, as always. No matter what, it will be a big adjustment for a large parish that is so used to his no-nonsense, straight-talking, humorous manner. His poignant “homework” assignments have never failed to keep the congregation on the right path for the week. So what is his parting homework? “You should know I am not management, I am only labor. Pay attention: This is CHRIST’S church. So make it the parish HE wants it to be.”

And so we shall, Father Phil. After all, “THE MASS NEVER ENDS. IT MUST BE LIVED. SO LET US GO FORTH IN PEACE TO LOVE AND SERVE THE LORD. THANKS BE TO GOD. ALLELUIA!”