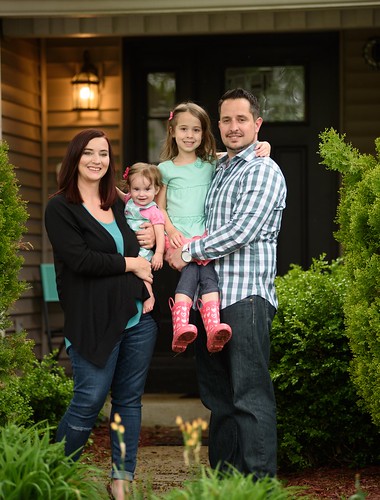 April Krowel is the winner of the Geist 2016 Mom of the Year Contest. She was nominated by her husband, Justin Krowel. His nomination said:

“After returning from a combat tour in Iraq and losing friends to suicide, my wife made the decision to embark on a journey to earn her Ph.D. in counseling psychology. Throughout this process, she has been involved in research about several military-related topics. She frequently presents at conferences and hopes to inform public policies through her research. She has done all this while being my wife (a tall task!) and a mother to our two daughters. Recently, we learned that our 9-month-old has atypical seizures; April analyzed dissertation data while comforting her in the hospital. She deserves to be recognized.”

April and Justin met each other while stationed at Fort Campbell with the Military Police Unit. Justin was a police officer, and April worked as support personnel. They met in January 2003 and were married nine weeks later on March 14. They deployed to Iraq at the end of March 2003.

Shortly after returning from Iraq in 2004, they lost two friends to suicide. This marked a turning point for April’s career. She initially wanted to be a teacher, then a lawyer and then an actress. She even became a theatre major for a short while. After losing her friends, however, she decided to major in psychology for her undergraduate degree at California State Polytechnic University in Pomona.

“The death of my friends helped me decide to work toward my Ph.D. in Counseling Psychology,” says April. “Since it was at the beginning of the war, there weren’t a lot of resources back here for mental health issues….I decided I wanted to disseminate my knowledge of information through research to the larger psychology community. This is my way of making a difference.”

As a fourth year doctoral student at Ball State, her dissertation coursework is looking at how student veterans adjust to the college environment compared to their non-veteran peers. Her other research consists of suicide prevention within military and veteran communities. She has presented both topics to conferences within the psychology community locally, regionally and nationally.

April has received too many awards to mention in this article, but here are a few highlights: 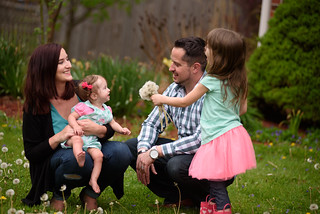 For April and Justin, starting a family didn’t happen easily. “We were told we couldn’t have children after trying to get pregnant for five years….We were planning to adopt children after college,” says April.

Then on May 20, 2010, April and Justin had their first daughter, Abbigail, who was born a couple weeks before April graduated with her undergraduate degree. A couple months later, April started her master’s degree and then eventually began working toward her Ph.D. Abbigail is now almost 6 years old and attends Kindergarten at Geist Montessori Academy.

“I always joke around that Abbigail deserves an honorary Ph.D. because she’s been with me through it all,” says April.

The Krowel family’s newest addition, 10-month-old Aubrie, has been experiencing unexplained seizures since she was 8 months old, but doctors have yet to diagnose. She’s had three hospital admissions while April has worked on her dissertation. April stayed with Aubrie at the hospital, never leaving her bedside. She remembers working from her laptop on the food tray over the bed as she cuddled with her baby.

Justin recalls a special moment during this time.

“I came into the hospital room after a break, and April was holding our youngest daughter, talking on the phone to our oldest daughter and working on her dissertation while grading papers for a class she teaches all at the same time. In this moment, I knew that the mother of my two girls was the best partner I could ask for to raise children with. For me, I am unsure how she does so much, stays so busy and is supportive of all of us while following her dreams of becoming a psychologist as she balances being a great mother. I am a lucky man!”

Outside of school, April enjoys going to the T-ball field with Abbigail, listening to live music, eating fine food and drinking good beer.

After completing her Ph.D. in July 2017, she plans to go into the National Guard.

She brags about her husband of 13 years. “Justin is a Purple Heart and a Bronze Star Recipient….He works as a rehabilitation counselor with the VA. We’re both in the mental health field, so we have a good balance. I couldn’t do what I do without him and his support.”

The Geist 2016 Mom of the Year Contest is sponsored by:

Pippa Mann #GetInvolved at the Indy 500