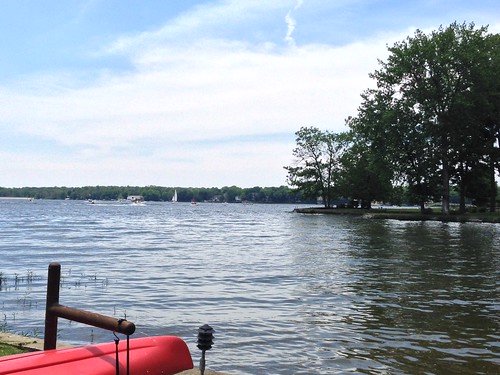 How a Controversial Funding Source Might Clear the Water

Once again, Eurasian Watermilfoil is making waves at Geist Reservoir. For several years, Geist homeowners, boaters and jet skiers have watched—somewhat helplessly—as the nasty aquatic plants with their feathery leaves invaded the lake’s coves and inlets. This summer is no exception. On any given day at certain spots on the lake, you can see what looks like a slimy, green carpet covering the water’s surface. The real trouble lies beneath. Milfoil wraps around boat props, and is sucked into the intakes of jet skis. There’s the prospect of a swimmer getting tangled in the green mess and possibly drowning. In a word, the milfoil is foul.

There is, however, an ongoing treatment program to foil the milfoil. Last year, the Geist Lake Coalition (GLC), a loosely constructed watchdog group concerned with lake safety and water quality, launched a pilot program to beat back the reservoir’s milfoil. Roughly 130 acres of the hardest-hit spots on the lake were treated with chemicals at a cost exceeding $100,000—money donated by concerned citizens. Brian Hall, the coalition’s president, says it worked. “Just look out there at the reservoir and tell me if it doesn’t look better than it did two years ago. I think it’s definitely making a difference. And, if we hadn’t [used the chemicals] you could only imagine what the condition would be like today,” he adds. “At any point in time, this lake could become toxic, and we’re trying to hold it at bay with the effort we’re making.”

Managing public expectations is proving to be more difficult. Hall maintains that many people can’t distinguish between milfoil and the lake’s natural plant life. “They see a plant and think we’re not being effective,” Hall laments. “That may be a plant that we can’t kill.”

This summer, 300 of the reservoir’s approximately 1,650 acres are being targeted in locations where the milfoil is most troublesome. The chemical treatments are the work of Aquatic Control, the Seymour-based vendor hired by the GLC. This year’s tab, again paid with donations, is in the $300,000 range. “The invasives are very, very aggressive and they will take over the entire reservoir if we don’t act,” Hall warns.

The chemical treatments are, however, only a short-term solution. Hall says the most effective method would be to pull down the reservoir level in the fall. Then, exposed to the harsh weather, much of the milfoil would die. There’s a problem, however. Citizens Energy—which owns the reservoir, and provides drinking water to Indianapolis—isn’t on board with the idea. Hall says Citizens is concerned the lake might not recharge to its needed level in the event of insufficient snow melt and spring rains. But Hall’s not buying. “The likelihood is that it would. That would be the preferred way, and then you’d save the cost and effort of raising funds, and we’d also save ourselves from the chemicals in our drinking water,” he says.

Another long-term solution requires dredging out the heavy sediment that is several feet deep at lake bottom, a result of agricultural, business and residential soil run-off. Hall says this sediment holds various nutrients that feed the plant life and algae. “If we can get that out, it will help considerably.”

A third option is the use of a product called Sonar to treat the entire reservoir. It’s expensive (about $800,000) but apparently effective for two to three years. Hall says it also kills the native plants, although they do revive. Not surprisingly, the DNR has concerns.

Hall’s worst-case scenario is a full-blown toxic algae bloom, as described by NOAA on its website: “They spoil water quality when present in large numbers by producing odors or thick scums. They can make drinking water smell and taste bad. Some cyanobacteria can produce toxins that are among the most powerful natural poisons known. These toxins have no known antidotes. The toxins are poisonous to humans and may be deadly to livestock and pets.” Hall warns that such an event would be devastating. “The EPA will lock us out—for swimming, boating or fishing.”

While treatment chemicals continue being dumped into the lake, discussions are underway to establish a Geist Reservoir Conservancy District (CD). The GLC argues the time has come to generate sustainable revenue to pay for more aggressive eradication programs, like dredging. “We can’t continue to go door-to-door, asking for dollars,” Hall cautions. “We create a district that encompasses the communities that are adjacent to the reservoir, and through an assessment based on their property values… that assessment goes directly into the CD fund and then is managed by the elected officers [of the CD],” says Hall, adding that another means of generating revenue might be a required DNR-type sticker for all boats using the Geist launches. “It’s not creating another layer of government. It’s really about us, and the transient boaters who use the reservoir. It kind of becomes a user fee, so it’s the most fair, as far as charging those who enjoy the reservoir.”

Hall concedes that there are differences of opinion about how to address the lake’s future, including the likelihood of opposition to the Conservancy District. But he’s convinced it represents the most equitable solution to a problem that, if not addressed more aggressively, will hurt property values and put a dent in the local tax base. “The reservoir has been in decline for several years now. We treat as much as we can. We believe the conservancy district is the best solution,” emphasizes Hall. “It’s definitely a case of pay me now, or pay me later. And, if you pay me later, it’s going to be a hell of lot more than if you pay me now.”

More information about the milfoil interdiction effort is available at geistlake.org.