On the Move with the New Sunrise Bakery 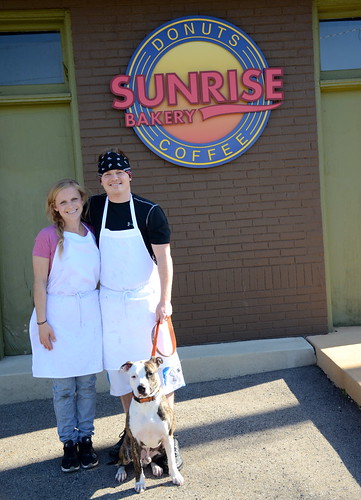 Katy Kitterman and Derek Owens alongside Ozzie the mascot.

All aboard! Sunrise Bakery in Fortville moves forward at full speed delighting customers with a large assortment of delicious baked confections.

Sunrise Bakery, previously known as Sunrise Donuts, is under new ownership by Derek Owens and Katy Kitterman. Since July, this culinary establishment has moved a few doors down to its new location at 101 West Broadway on the corner of Broadway and Main. Upon entering the bakery you instantly grasp the clean, fresh, open concept and most welcoming presence.

Derek and his girlfriend, Katy, serve as the primary bakers. Both entrepreneurs have a history of working in restaurants throughout the years.Sunrise Bakery supports local vendors while satisfying customers at the same time. For instance, you can enjoy the convenience of ordering freshly made pies brought in from Mom’s Pies in Kokomo. Also, you can special order cakes for any occasion such as weddings, birthdays, graduations and more. Simply browse through the photo album in the store to choose your custom flavor and design for that special cake made from scratch by a local cake maker. Even the coffee is locally roasted in Central Indiana.

Derek proudly asserts, “We sell coffee by the cup or ground-to-go and we make fresh coffee hourly.”

Derek points out, “Since the Fortville train history is so special and such a big part of the unique culture here, we wanted to preserve this nostalgia. We have the original Fortville Train Station sign hanging on the wall, and there is also a vintage Lionel model train-layout constructed on two levels.”

The two trains operate simultaneously from a remote control to enthuse customers of every age.

Derek graduated with a degree in general studies and sociology and attributes much of the creativity throughout Sunrise Bakery to the talents of Katy and her interesting family. They each bring a fascinating element to the success of this locomotive enterprise.

Katy began studying interior design at the Art Institute in Chicago and completed her degree at the Art Institute of Indianapolis. Her father, John Kitterman, volunteers his keen business sense and designed and built the Sunrise Bakery concept. Early railroad architecture is featured with a blend of toy trains and robots from the ’40s and ’50s. He even refurbished the original little pink elephant!

Most recently, John was Partner in Development at EnterTRAINment Junction, a railroad themed family entertainment center in Cincinnati featuring the world’s largest indoor train layout. Interestingly enough, he also worked on numerous projects and tours with singer-songwriter Neil Young over the years and currently owns and operates a digital graphics business in Fortville. 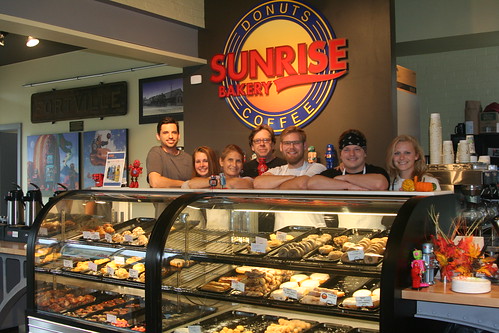 Katy’s mother, Susan Kitterman, is equally involved with the bakery and lends her extensive knowledge of baking and business savvy to Sunrise. Susan is the founder and director of New World Youth Symphony Orchestra for the past 33 years. She is soon to retire and looks forward to dedicating all of her time after she concludes her final season with the orchestra. Katy’s younger brother, Henry Kitterman, attended Indiana University as a graphic design major and helped with general construction and fabrication of store fixtures. He also helps in the pastry kitchen and in strategic planning of future development of Sunrise Bakery.

Then there is one worker who is practically like family. His name is Mike Seifert. He’s been friends with Derek since sixth grade. Mike represents a crucial component in the main operation of making dough and baking along with Henry and Katy.

Here is what some of the customers are saying about Sunrise Bakery:

“Aside from the donuts, it’s a family atmosphere. You almost feel like you’re a part of their family.” (Ed Clark)

“In our family, Tuesday is donut day. I bring my preschooler here, and he loves that they know him here.” (Cricket Krengel)

“I admire the atmosphere resembling the Fortville Train Station, not to mention the donuts.” (Jack Jones)

For your next stop in Fortville, come taste the goods at Sunrise Bakery. Hours are Tuesday-Saturday, 6 a.m. – 1 p.m. and Sundays, 7 a.m. – 1 p.m. The new location offers outdoor seating on the patio.