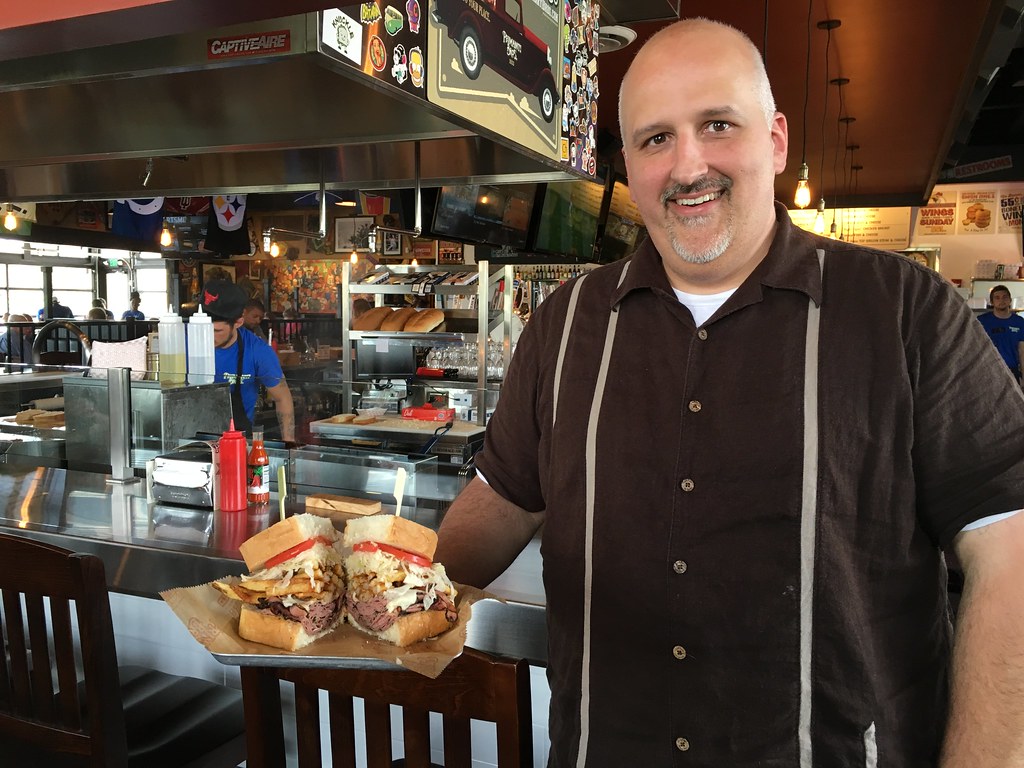 I seem to be the only person in town who had not heard of the famous Primanti Bros. restaurant when it hit Hamilton Town Center this May. Apparently, if you’re from Pittsburgh, have ever been to Pittsburgh or even know how to spell Pittsburgh, you are familiar with (and most likely a fan of) Primanti Bros.! Having eaten there twice now, I can tell you the place is definitely worth the hype.

First off, you walk into the restaurant, and you feel like you’re at a party. It’s a very lively atmosphere with large televisions everywhere, local pro and college pennants hanging from the ceiling, crowds of people and fun and interesting articles framed on the walls. On one side of the building is an indoor/outdoor patio. There’s also a fire pit that gets used in the evenings and when it’s cool outside. On the other side of the restaurant is a large three-sided seating area that serves as the bar and diner counter. You can watch the cooks make your piled high sandwiches behind the counter as you watch TV or talk to friends.

Then…there’s the FOOD! They are famous for their two-handed huuuuge sandwiches. Our waiter suggested the Almost Famous Pastrami sandwich. When he brought it to the table, it looked like you would need a forklift to get it into your mouth! Piled on the sandwich was warm flavorful pastrami, melted provolone cheese, sweet and sour coleslaw, fresh-cut fries (yes, you read that right!) and tomatoes served on a thick piece of freshly baked Italian bread. It really was an explosion of flavor and texture. I loved it! They offer several types of sandwiches with all types of meat and various toppings. If you’re looking for a place that will serve you a fried egg on a sandwich, this is your place. To some, this may sound gluttonous…and can I say, I pity those people!

Primanti Bros. offers much more than sandwiches. You’ll also enjoy their pizza (go for the Legend), burgers, salads (the steak salad has fries on top) and wings (specials are on Sunday and Monday). Their BLT tots are a plate of tater tots loaded with cheese and bacon. It could EASILY be your meal!

They also have a full bar with great daily specials. Wednesday is half price drinks day and Friday means Four-Buck Fridays on all craft beers! They even spike their ice cream shakes. Try the salted caramel pretzel shake. It’s unbelievable!

Their Happy Hour menu is full of great deals. The hours are 4-7 p.m. and 10 p.m.-close. (Finally a bar/restaurant that’s open late!) There are $3 tots, $2 pizza slices, $5 wings, queso, fresh cut fries, $4 stuffed pretzels, pub pickles with ranch dip and mozzarella wedges. Besides the fact that the food is great and plentiful, it’s really well priced!

Finally, there’s the people! The new location employs over 100 workers, and they are full of smiles and upbeat attitudes. Every person who greets you is friendly! That probably has a lot to do with Sean Keefe, their general manager (also known as the “team coach”). He’s a big guy with positive energy, and he seems to be the perfect person to run such an establishment. His enthusiasm is infectious and endearing! When I commented on how reasonable the prices were, he replied, “We’d rather serve someone four $10 meals a week than someone a $40 meal once a week.” I like that philosophy! 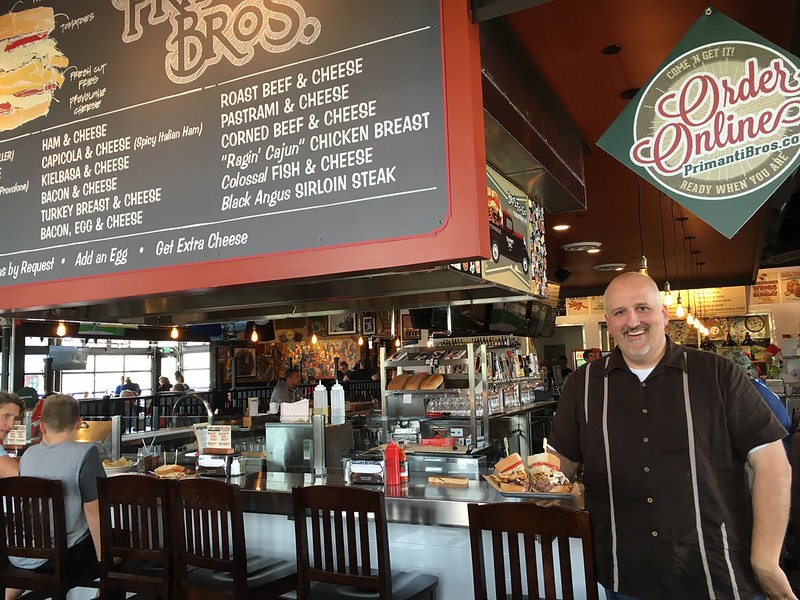 Primanti Bros. is also already giving back to the community. The week they opened, they hosted a fundraiser for Colts player Pat McAfee’s foundation. Pat is from Pittsburgh and knows of Primanti Bros.’ great reputation. The restaurant is the main destination for any politician who visits the Steel City. While Indianapolis has St. Elmo’s and Shapiro’s, Pittsburgh has Primanti Bros…and now so does Indy!

The restaurant was featured on the first episode of “Man vs. Food.” It also made the list of the Manliest Restaurants in the U.S.A., and that is NO surprise! National Geographic magazine even featured it in its article, “100 Places to Go Before You Die.”

While I was in Primanti Bros., I ran into my friend and local photographer, Tom Cooper. Tom’s a native of Pittsburgh and still returns regularly to visit his brother. “When I go back to see my brother, it’s the first place we go,” Tom shared. That sort of loyalty seems to be common among fans of Primanti Bros.

The HTC location is the 33rd restaurant that the popular chain has opened. It all started in the midst of the Great Depression with Joe Primanti pushing his lunch cart along Pittsburgh’s Strip District, offering reasonably priced sandwiches to the longshoremen and truckers. With the success and positive feedback he had received, he took a chance and opened a storefront on 18th Street along the Strip District. His two brothers and nephew joined in to help. Jim Patrinos bought the business in 1974 and has overseen its successful expansion.

If you live here in town, you will soon have other Primanti Bros. to frequent. They are set to open three more restaurants in the area. Within the next year, downtown, Greenwood and Avon will all be home to this booming franchise. They are also looking for a location in Broad Ripple. After all, every Hoosier deserves the chance to down a four-inch-high sandwich!!! Try out this great new eatery. You won’t leave disappointed…or hungry!