If there were a contest for the most creative beer and ale names, Scarlet Lane Brewing Company might just take first prize.

The beer names have been popular since they opened at the prospering brewery, which has been so successful the co-founders have established a Legion of Ale member club to enhance the Scarlet Lane experience.

“We hope to educate members on what they are tasting, whether it’s good or bad,” Sheets said. “We want them to be more educated while out having a beer and not just assuming.”

Legion members also participate in the development of their favorite Scarlet Lane Brewery beers by becoming a sensory panel member. They are also included in research and development teams to taste certain beers before they launch in the market.

“There are a lot of people out drinking craft beer right now,” Sheets stated. “It starts with what consumers are wanting to drink and what is catching on. Citrus IPA’s are huge right now. We like getting the feedback and new ideas so we can stay ahead of the curve.”

Other perks to being in the Legion include, home-brewing lessons, a membership card, an in-house mug, merchandise discounts, beer verbs and member access to VIP events. The cost for a life time membership is only $85.

There is also an Anthology series that includes Erik Bloodaxe, a Braggot style and Dark Illusions. This series also has the Heaven and Hell Halloween collaboration between Scarlet Lane and Taxman Brewing Company, 13 S. Baldwin Street, Bargersville, Ind.

Each year the breweries will trade who brews Heaven and who brews Hell. The series began last year. Scarlet Lane brewed Hell, an Imperial Stout, and Taxman brewed Heaven, a Golden Strong Ale.

Scarlet Lane occupies a 10,000 square foot facility that offers a nice, open-space feel. The tap room offers a very comfortable atmosphere with plenty of seating. You can also sit at the bar and chat with the tap room staff. 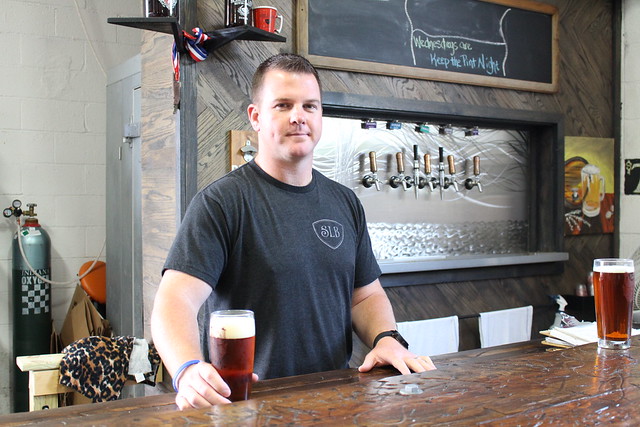 “Most of our tap room staff go through Cicerone beer training to learn the different styles of beers, proper ways to pour, proper glassware, and how to clean the glassware properly,” Sheets said. “It gives them more knowledge and makes them more comfortable while talking with our customers. It also makes the customer’s experience more engaging and enjoyable.”

Patrons can order food from The Grill 2, and Pizza King, which are both just up the street, and have the food put on the bar tab. Food trucks are available on weekends, featuring Gomez Bar-B-Que and Caplinger’s Fresh Catch on the last Friday of the month.

Sheets, originally from Labanon, Ind., handles the sales, business development, and finance side of things, while Chief Brand Officer and Co-Founder Nick Servies, also from Lebanon, IN., handles the marketing, social media, and IT.

Scarlet Lane CEO and Head Brewer Eilise Lane supervises all things brewing. That includes recipe formulation, grain ordering and staying on a strict brewing schedule. Eilise, a native of Greencastle, Indiana, finished her education at The American Brewers Guild CBA program. This was after spending six years home brewing and shadowing at several Oregon breweries. Besides Sheets, Servies, and Lane, an investment team that is primarily made up of females helps with other operations.

“It’s a good mold,” Sheets noted. “We all have different backgrounds and strengths to make Scarlet Lane a success.”

“It feels like we have already been here for ten years,” Sheets said. “We have been working non-stop to make all of this possible. We chose McCordsville by chance. We were driving nearby looking for a place that would provide enough space and this was perfect. It was a nice fit, and for the most part it was exactly what we were looking for. 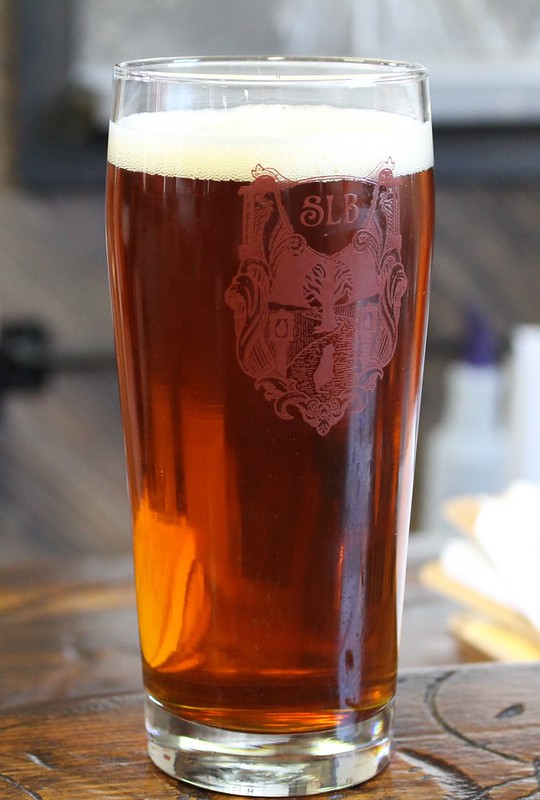 “The people in McCordsville were very receptive to us from the start,” Sheets added. “They have supported us and given us a lot of business. We also get a lot of people from Geist, Fishers, Greenfield, Indianapolis, Carmel, etc.”

Sheets noted that many retail outlets such as Kroger and Big Red Liquors and select Payless and Crown Liquors sell Scarlet Lane 22oz bombers. Many restaurants and bars across central and northern Indiana feature Scarlet Lane beer on draft. If you don’t see it, ask your favorite watering hole to carry SLB.

“We recently started distribution in a few more areas of Northern Indiana,” Sheets noted. “This now gives us coverage from Marion County all the way north to the Michigan boarder. We are thrilled to get our brews in the hands of a lot more people throughout the state.

“We are very happy with our success and we really want to thank our customers and followers who have been very supportive and stuck with us to see what we do next.”