A Scout is: trustworthy, loyal, helpful, friendly, courteous, kind, obedient, cheerful, thrifty, brave, clean, and reverent. Beloved Scoutmaster Angelo Peduto conducted his life according to this poignant Boy Scout law and embodied it. Six months after his sudden and tragic passing, his Boy Scout Troop 446, chartered at Saint Simon, is committed to carrying on his legacy. 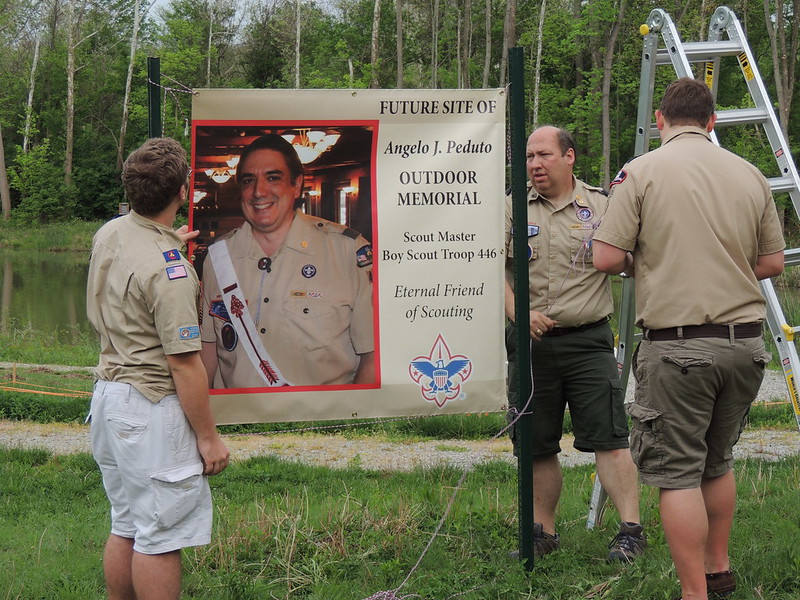 With the groundbreaking of the memorial honoring Mr. Peduto, the troop took the first steps in cementing his memory in the hearts of their troop and others across the state. The ceremony took place at the Golden-Burke Boy Scout Center on the city’s Northside on Monday, May 12, 2014.

As I proceeded to the memorial site with the crowd of Scouts, family and friends, the somber mood in the air exposed the raw grief that would linger for some time to come. Michael Peduto (an Eagle Scout) shared a few words about fond memories he had of time together in Scouting with his brother Angelo. Everyone in the crowd got an opportunity to move a piece of earth from a temporary fire ring that will later become Mr. Peduto’s memorial.

A PowerPoint presentation by troop leaders just prior to the ceremony had already given the crowd a flavor of the impressive finished product soon to be under construction. At the center of the memorial will be a masonry stone fire ring to symbolize an eternal campfire, and terraced seating surrounding the fire ring will provide a warm and inviting environment conducive to year-round gatherings.

The memorial sprang to life after the troop received a significant amount of money in his memory from the funeral. Among the donors, an anonymous source was so moved by the loss, he felt compelled to donate. Many donations were made from friends and family who knew Angelo since childhood, having grown up in Shelbyville, Indiana, as well as friends from St. Simon, Lawrence Township area families, and customers of his business.

Donations in hand, ideas began to flow. With Angelo and his family a regular fixture at Sunday mass at St. Simon, and the troop being based at St. Simon, troop leaders explored various outdoor locations to celebrate and remember their Scoutmaster. Ultimately the decision was made to base the structure at the Boy Scout center where all Scouts in the area could enjoy it.

BSA Troop 446 has a tradition of carrying a portion of ashes from their previous camping sites to be discharged into the fire of the next camping trip’s campfire. The troop began this tradition when they obtained a portion of ashes that were started from a campfire at the very first Boy Scout camping grounds in Brownsea Island of southern England, in 1907, by the gentleman who originated the Scouting movement, Lord Baden-Powell.

These ashes have been carried from campfires in over sixty countries, across six continents and from the moon. During the groundbreaking ceremony, each Scout and family members of Troop 446, along with Peduto family members and friends, placed a pinch of these ancient ashes onto the site of the future fire ring. This memorial truly will symbolize an unbroken chain linking Scouts around the world. 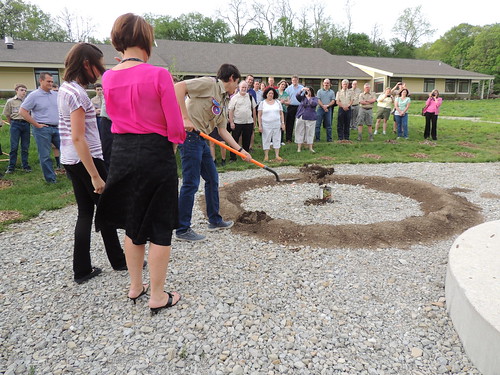 Peduto’s widow, DeeDee, said, “If anyone is deserving of this, he is. This is so fitting because he was so committed to always doing the right thing.” At the ceremony, she and her children, son Adrian and daughter Gia, were visibly moved by this gracious gesture. But she admitted to me, “Angelo never would have agreed to having a memorial in his honor.”

Troop leaders echoed DeeDee’s thoughts as they described how Peduto as a youth achieved the distinguished rank of Eagle Scout. As an adult, he devoted countless hours volunteering his time to scouting as a Cub Scout Pack Master, then Boy Scout Troop leader and role model. Though I have heard many describe his role in Scouting, the meaning of it didn’t start to sink in until I looked around and saw the faces of all the ones who loved him so dearly.

Eager to learn more about this extraordinary Scoutmaster, I met up later with DeeDee. Already I’d gotten a small sense of what a remarkable person and exemplary life he lived in his short time. Based on all Angelo accomplished and his tireless dedication, I got the impression that he was a vivacious character, full of life and laughter. But I quickly learned otherwise. A floodgate of emotions opened as she began telling me more about her husband of 19 years. “Angelo was a quiet, soft-spoken, faithful man,” she said. “He was always patient at home, even if his patience was short at work. Whether he was at home or away, he was always involved with the kids.”

The conversation slipped back to Scouts. She told me that later, during his college years, he became an adult leader in a troop. He became involved in their son Adrian’s troop after being active in faith formation at Saint Simon for a while. He decided he enjoyed working with kids. “It was all an extension of his commitment to faith and family,” she said. When Adrian joined the Cub Scouts in first grade, the troop was dwindling. Angelo and a small group of adult volunteers worked hard to revive the troop and increase their membership. “He just wanted to give back to the Scouts all that he’d gotten out of it,” DeeDee explained.

Angelo and son Adrian were frequently away at scouting activities and trips, and DeeDee was used to it. She was also used to knowing their campouts were in locations unreachable by cell phone. She and daughter Gia enjoyed many mother-daughter weekends knowing the Peduto boys were having a great time and probably hard at work and play. The campfire at evening’s end was always Angelo’s favorite time.

But she remembers one outing very vividly. “The boys went to the Rocky Mountain High Adventure Base Boy Scout Camp in Colorado,” she began. Knowing Angelo’s history with atrial fibrillation, she worried about this particular trip. I was more than green with envy as she described that part of the trip included a hike up a 14,231-foot mountain, which the troop was scheduled to summit at sunrise. He had suffered an acute episode of AFib due to the thin air in the high altitude. In true Scouting fashion, he made a very “brave” decision and returned to base camp, with a promise to the boys to definitely make it to the top of the next one. DeeDee managed a smile as she explained how disappointed Angelo was that he couldn’t finish that mountain climb. 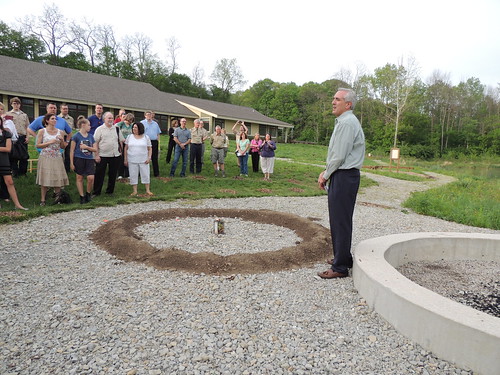 “Quitting early was never part of Angelo’s plan,” she said. An incurable entrepreneur, he put his all into his work, as well. Partners in business with his older brother Michael, the two grew Circle City Tickets from a small ticket broker operation in 1982 to the successful business it is today. “I have never seen anyone so close as these two brothers. They did nearly everything together. Mike handled one aspect of the business, Angelo, the other. But they never fought,” DeeDee said.

As close as they were, some things escaped the watchful eye of Angelo’s older brother. “There were things Angelo did in Scouts that I never knew about,” Mike Peduto admits, during the groundbreaking ceremony.

As his emotions rose to the surface, one could only hope that he and the rest of the family find comfort in seeing Angelo’s spirit and passion for Scouting live on.

“He was an amazing person,” DeeDee said. “He was a dreamer, and he always wanted to retire, live on an island, own a bar and teach diving lessons.” Though Angelo never had the opportunity to live out that dream, DeeDee intends to make sure their children pursue theirs. She said, “Adrian is still on track to achieve the rank of Eagle Scout. He wants to become an astronaut, and Gia would like to become an astrobiologist.” Although the future is unknown, DeeDee said she is certain of her husband’s legacy, “I hope this memorial will serve as a reminder about how important it is to put faith and family first.”

The memorial is expected to be completed in summer 2014.