Sip the Season With 21st Amendment 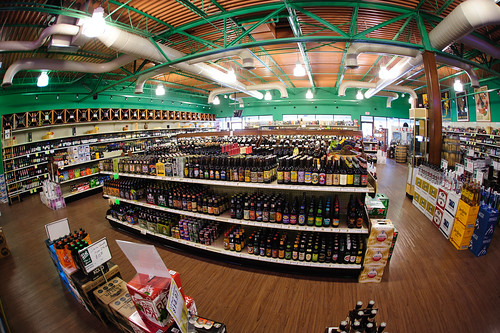 According to owner Jim James, selection, service and price set his store apart from area competitors. He’s been in the business for more than 40 years, opening the first 21st Amendment store in 1971. Since then, his thirst for providing the area with fine spirits has only grown and he’s excited about his newest Geist location. The 20th 21st Amendment store is already under construction in Westfield, James said.

Shoppers, though, are quick to pick up on James’ and his staff’s passion for their product.

“I just like wine,” Ludy said, “which is both a blessing as a curse.”

Ludy’s passion for wine grew when living abroad. He started his career in the adult libation industry working as a bartender and wine steward in Spain. As a result, he’s eager to share a few Spanish-inspired summer concoctions, just in time for patio sipping season.

Sangria is most people’s first thought when it comes to Spanish wine drinks, but it can be labor intensive. Chopping fruit and chilling the blend can take several hours. Thankfully, there are other, less complicated Spanish-inspired mixtures to be enjoy.

Ludy recommends serving tinto de verano at your next backyard gathering. This refreshing cocktail is made by simply mixing equal parts red wine and sparkling lemonade (or Sprite), then serving over ice with a sprig of mint or raspberries as a garnish.

“It doesn’t even have to be a Spanish red, but of course that works well,” Ludy said.

Later on in the evening, perhaps when the senses have dulled, Ludy suggests pouring kalimotxo. The simple mixture of red wine and cola (Ludy suggests Diet Coke) is an international version of a wine spritzer. Consider serving over ice and garnishing with an orange wheel or slice.

If you’re curious about these concoctions or other wines, Ludy encourages you to visit the store during the weekly tasting event. From 1 to 4 p.m. each Saturday, you’ll have an opportunity to sample some of the season’s best wine offerings. Right now, he’s been focusing the tastings on Zinfandels to accompany spring grilling and refreshing wines that will help you beat the heat this summer.

Have a large party or function you are planning? 21st Amendment will deliver your order door-to-door saving you the hassle of lugging bottles, cans or kegs around in your car.