Organizers supporting the formation of the Geist Conservancy District announced today that they have nearly two times the number of petition signatures needed to submit their plans to the courts. Waterfront neighborhoods (click for map) around Geist Reservoir have taken the important first step to the formation of a special assessment district that will generate funds to care for the reservoir for generations to come.

“Our reservoir is over 75 years old and showing the signs of its age more and more every year,” said Brian Hall, President of the Geist Lake Coalition who led the petition campaign. “We can’t just keep passing the cost to our waterfront residents every year to clean up the problems created by home development, transient boaters, and an unrestricted private boat ramp. A conservancy district allows us to save our lake from going toxic and preserve our property values in the greater Geist Reservoir community.”

Beginning last summer, local volunteers started going door-to-door armed with a Geist Lake Coalition information brochure, Geist Conservancy District map, and a petition in support of the district formation. Public gatherings such as town halls and homeowner’s association meetings were also utilized to educate the residents on the importance and urgency of forming this new governing body.

Matt Troyer, attorney for Bingham Greenebaum Doll LLP and Geist resident, drafted the petition and attended many of the public meetings.

“When presented the facts about the long-term viability of a self-sustaining, ongoing lake treatment plan that is wholly focused on preserving our property values and water quality, a vast majority of homeowners signed the petition. Everyone agrees that the cost of preserving the reservoir should be a shared burden by the lake users and homeowners alike.” 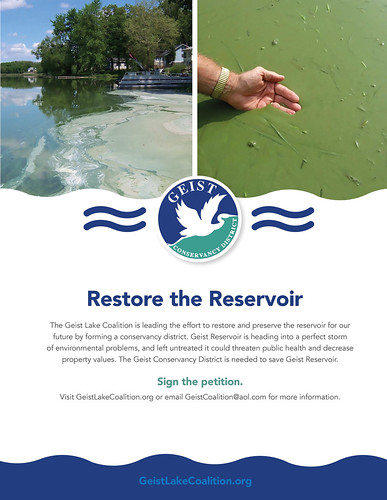 The Geist Lake Coalition created this informative brochure outlining the need and plans for the Geist Conservancy District.

Conservancy districts are governed by elected volunteer boards that can collect a special benefits assessment, or tax, from homeowners residing inside the district as well as assess boat user fees. With the funds, this governing board can conduct year-round dredging operations, control weeds, maintain shoreline erosion and facilitate proper drainage. As for Geist, organizers plan on sharing the financial responsibility with boaters and residents alike by selling annual boat permits and collecting property tax assessments raising an estimated $2 million per year. Their plans, along with the signed petitions, will be presented to the courts later this month initiating the conservancy district formation process.