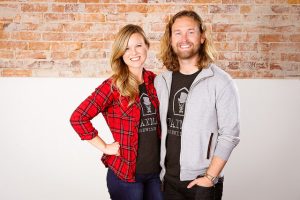 Leah and Nathan Huelsebusch are bringing their Bargersville based Taxman Brewing Company to Fortville.

Nathan Huelsebusch, president and CEO of Taxman Brewing Company (13 S. Baldwin St. in Bargersville), has enjoyed so much success at the southside location that the Taxman team is ready to launch a new restaurant and pilot brewery in Fortville.

“We just celebrated our second anniversary in September in Bargersville, and we are really excited to be launching our second location in Fortville,” Huelsebusch said during a recent interview. “We want to expand our northside presence and help grow the Fortville Main Street business district. I think we will draw a lot of customers from the communities surrounding Fortville: Geist, Fishers, Indianapolis, Carmel, Noblesville and Zionsville.”

The new Fortville location, which will be located at 29-35 S. Main St., is scheduled to open in late April or May of 2017. It covers three parcels of land and will take up three storefronts on Main Street. Once construction is complete, the restaurant will seat approximately 120 guests and have a private dining room that can accommodate up to 50.

Huelsebusch plans to garner the same enthusiastic response in Fortville that Taxman has rapidly enjoyed in Bargersville, highlighting the wide array of drink and menu options. Taxman Brewing Company has a nice industrial modern feel with farm-to-table food and Belgian-inspired beers. Huelsebusch credits his team and the company’s commitment to the community for the success of the business. His wife, Leah, is Taxman’s COO of Retail Operations. His sister, Kirby McCloy, is the Chief Financial Officer, while his brother-in-law, Colin McCloy, is the Vice President of Brewing Operations. “We work well as a team, and each of us brings a unique skillset and perspective to the table.”

“I think Taxman Brewing Company has been a success because we put as much focus on the food as we do the beer, and we try to create an environment that is fun,” he stated. “Fortville is a growing community in need of an additional family dining option. Our restaurant will be family friendly and will serve elevated farm-to-table fare which will allow us to highlight the great work being done by Indiana farmers.”

Taxman Brewing Company began as a way for Huelsebusch and his partners to share their interest in beer and food with their local community. Huelsebusch lived in Belgium for almost three years and enjoyed how the small country had several thousand different beers and hundreds of community-based breweries. “Many of the small towns we visited in Belgium had a brewery or a local restaurant that served as the gathering place for the community. This was our vision when we opened Taxman in Bargersville. We wanted it to be a place where people could come together, meet their neighbors and connect.”

Huelsebusch met several of Taxman Brewing Company’s co-founders in Belgium, and they began investigating and enjoying the extensive variety of local beer options. On his Taxman Brewing Company website, Huelsebush says Taxman brews Belgian style beers because “they fell in love with the depth of flavor imparted by the unique strains of yeast used to ferment the beer.”

Huelsebusch claims the name of the brewery, Taxman, came about because tax consulting work took him to Belgium, and “three of Taxman’s founders are, in fact, tax professionals,” he said.

Taxman’s skull and bow tie logo is inspired by Benjamin Franklin’s quote, “In this world, nothing can be said to be certain, except death and taxes.” Huelsebush stated that the Town of Bargersville was selected because it reminded him and his co-owners of the small brewery towns they visited in Europe.

Taxman Brewing Co. has received national attention, having won a bronze medal at the 2015 Great American Beer Fest in Denver, Colorado. “That was very exciting,” Huelsebush noted during a recent interview. “We were competing against a lot of different breweries.”

Taxman Brewery Company’s beers can be found in numerous bars, restaurants and retail locations. Taxman has an extensive variety of Belgian inspired beers, some of which are classic Belgian styles, while others have a decidedly American slant. Taxman’s house beers include such clever names as La Maison, Gold Standard, Deduction, Exemption, Qualified and Hop Collection.

“We work with a lot of local independent farmers for our ingredients, and we really like having a connection with our supplier,” Huelsebusch said.

The menu also includes a wide-variety of salads, sandwiches and entrees that take advantage of seasonal produce that is grown locally. Seasonal salads include kale and heirloom tomatoes that are sourced from a farm outside Bloomington.

“We hear a lot from customers that they come to Taxman for the food as much as they do the beer,” Huelsebusch said. “We have great team as well, and we have been able to retain a lot our restaurant and brew staff since we opened. Everyone that works for Taxman is passionate about the business, and that is reflected in their work ethic and commitment to our customers.”