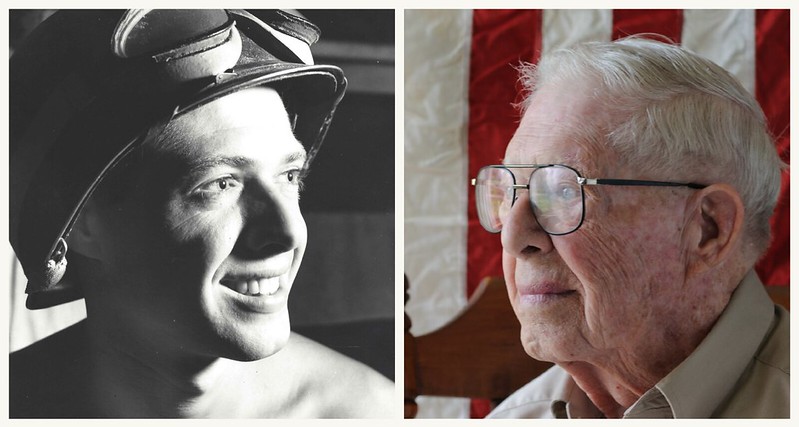 According to the Indiana Historical Society, Army Sergeant Robert “Bob” Albright is Indiana’s first and only combat photographer from WWII. He’s the recipient of two Bronze Stars, a Bronze Star Medal and a Victory Medal. “All I wanted was to fly,” says Bob, who will celebrate his 92nd birthday on July 9.

Due to an over-abundance of pilots, Bob joined the Army. Immediately after basic training, his entire unit was shipped into infantry – except him. The military was prepping for the D-Day invasion on Normandy. “Someone was looking out for me,” commented Bob, for he was sent to Paramount Studios in NYC to learn photography. He took photos of models and actresses, then was sent to Hawaii. “Kodak kept film in some caves in Hawaii, and that’s where I was sent to prep for the Pacific theater,” Bob explains. It was here that he learned Japanese from some local boys, whom Bob terms “Nese boys.” This informal language training would later prove valuable. 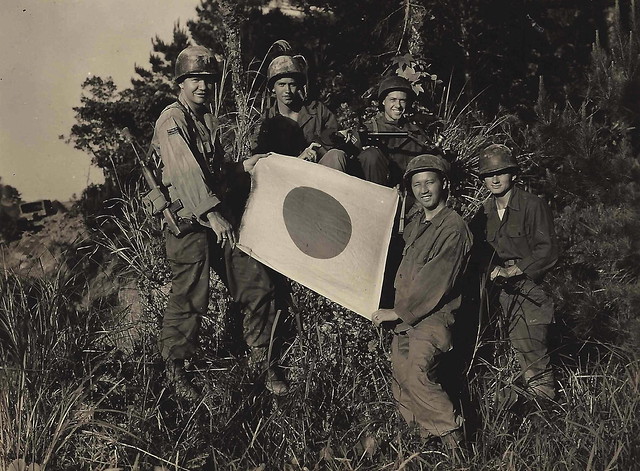 Sgt. Albright was shipped to the Philippines and then to Okinawa. He vividly recalls the voice of “Tokyo Rose” over the airwaves announcing that “we know you’re comin’ and we’re ready for ya.” Not quite. On April 1, 1945, the U.S. forces (along with the British) arrived in the north, and the Japanese were prepared in the south. It was unprecedented and unexpected to have been met with zero opposition, but that’s exactly what happened. An armada of some 1,300 U.S. and Allied ships lay off the coast of Okinawa carrying some 548,000 troops (at Normandy, there were 284 ships). It was here that the final battle of World War II was fought. The bloodiest battles of the war took place on Okinawa.

If it is possible to have experienced WWII with a VIP pass, Bob managed to do just that. For Bob wore a pass around his neck hand signed by Admiral Nimitz and General MacArthur, indicating that “no one is to interfere with this soldier’s duties.” The “duties” were left undefined, and Bob capitalized on this, explaining that he “may have pushed the limits a bit.” He then rephrases: “I got away with a lot!”

It was on Okinawa where, after the capture of the Kadena airfield, Bob took his first battle photographs. Having come ashore with the third wave; the 24th Corps lead by General Hodge, the soldiers captured Kadena airfield. It was here that Bob and some fellow soldiers had a self-imposed mission: “Liberate the Still.” This operation, while not a formal order, involved commandeering the still from the Kadena airfield hospital and turning it over to the cooks. Bob indicated that even the hospital was protected with trip wires and explosives. Apparently, it was worth the risk: with some jam and sugar added to alcohol, Bob said it was the best brandy he’d ever had.

When asked about weapons or guns, Bob said the Army gave him a rifle and described it further: “It was more of a nuisance. What am I supposed to do with it? I have to use both hands on my camera, then had this rifle strapped across me. I would lean it up against a tree and hope I wouldn’t forget to pick it back up.” He was finally able to ditch the rifle, but then was issued a 45 automatic. When it was clear to Bob that he could throw it with more accuracy than fire it, he cleaned it and wrapped it in plastic so that when he went through an inspection, it was ready for presenting. Bob clearly argued that there was no “combat” involved for his “combat photographer” designation. Sgt. Albright does confess that he had a camera literally shot out of his hands, although he never suffered from any injuries. 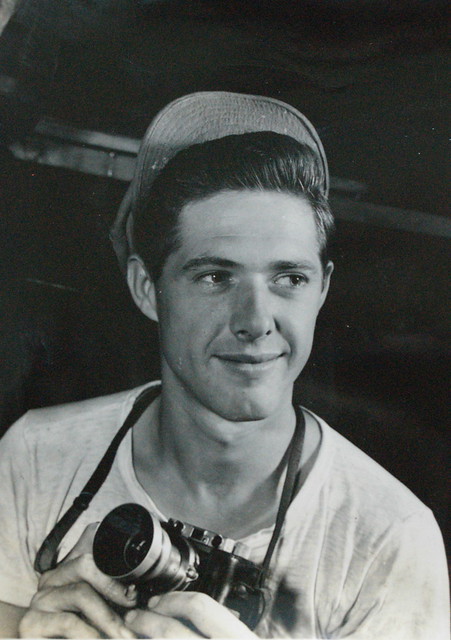 Bob was frequently behind enemy lines taking photos. Bob and another soldier were ordered to take a Jeep around Sugar Loaf Hill to “peek around.” They were asked to do this because the battle for this hill on Okinawa was a bloody dance. The Marines would claim it during the day; the Japanese would regain control over it at night. The dominance for Sugar Loaf Hill would flip 11 times in what proved to be some of the heaviest losses for both sides. Some units were totally wiped out. The island was porous with an estimated 60 miles of caves and tunnels in which the Japanese would conceal themselves and their weapons. There were literally cannons on tracks that the Japanese would wheel out at night. On this particular mission, the control for the Hill had flipped 10 times at this point. Bob and his comrade found themselves deep behind enemy lines. Bob was able to capture photographs of the key tunnels, one of which had steel doors, and bring these back to command.

Realizing how far they had traveled, they needed to retreat before a sniper bullet found them. The escape route from their location on Sugar Loaf Hill led them down to the beach, which, fortunately, was at low tide, revealing the land mines littering the area. Thanks to the picric acid on the detonators, the bombs were yellow, allowing an obvious path for the men to follow. Along the route, they ran into a group of Seabees. These are military and civilian engineers who were responsible for, among other things, figuring out how to create runways on sand. They were able to build a landing strip by linking brilliantly-designed, lightweight sheets of metal together. Bob informed these men of the main tunnel with the metal door. These brave Seabees risked their lives and welded the “damn thing shut.” Amazingly, no snipers had scopes set on that area during this critical time. That night proved to be a turning point for the Marines. As a result of the efforts of Bob and the Seabees, the Marines were able to capture Sugar Loaf Hill once and for all. Bob and the engineers were awarded Bronze stars for their acts of valor. Bob dramatically downplays his role: “I told them they should figure out a way to seal it. They did it, not me.” For Sgt. Albright, this was his first of two earned Bronze Stars, among other medals he would receive. 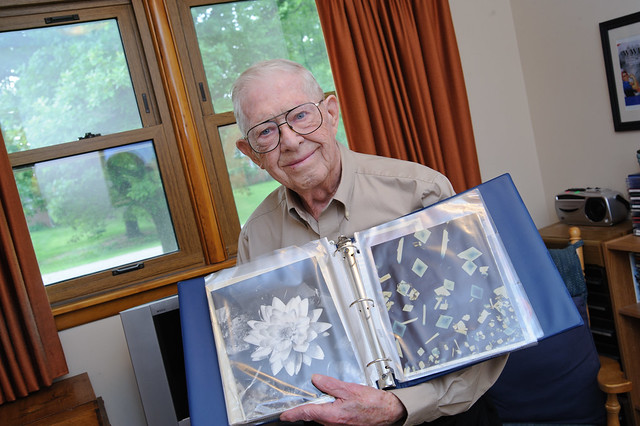 Due to the nature of Bob’s responsibilities and the sensitivity of his orders, Bob was mostly alone or with one other soldier who would have been his driver. However, Sgt. Albright met a fellow Hoosier and became friends with this man. He was none other than Ernie Pyle. On base, the photographers and journalists were present for daily briefings. It is here that Bob and Ernie forged a friendship. One day, Bob and Ernie were told that the following day they would both be going to the island of le Shima to report on what was going on there. Later that night, Bob received different orders that were “restricted” (top secret) that he was to head to the southern area of Okinawa. Bob was to photograph a plant which manufactured 2-man and 3-man submarines, the type used during the attack on Pearl Harbor. The trip to le Shima would prove fatal to Ernie, for that is where a Japanese sniper’s bullet found him.

As the war officially ended, Bob realized his work was only beginning. Sgt. Albright spent 3 days alone with his new patrol made up of Japanese soldiers (former POWs). The rest of the Allied troops were leaving, and the “occupation” troops were arriving soon. During this time, while clearing out the caves where many Japanese soldiers were still hiding, a grenade was tossed out, landing at Bob’s feet. As fate would have it, it was a dud.

Yet nothing could have prepared him for what he was about to encounter. Bob would be part of the first U.S. military personnel to find the Bataan Death March survivors. (His descriptions are horrific and aren’t shared here.) The Japanese patrol did not realize that Bob spoke and understood their language. So when the patrol would say (in Japanese) “don’t take them there…” Bob knew exactly where he wanted to go. 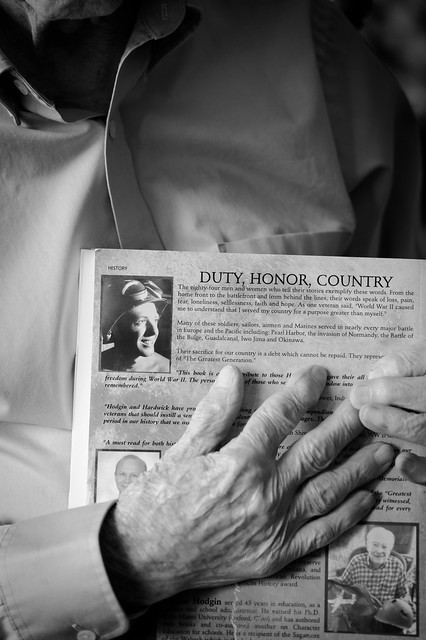 The photography that Sgt. Albright was responsible for was dominantly used in the war tribunals. He was awarded a second Bronze star for his acts of valor in acquiring these photos for the War Commission. Sgt. Albright was also awarded a Victory Medal from the Philippines government for his work in photographing the Bataan survivors.

Bob’s military photography experience launched him into the corporate world after serving his country, Eli Lilly hired him as their first photographer. The FDA announced that it would no longer accept artist’s sketches for approval submissions from drug companies. In fact, all medical textbooks at that time were artistic renderings of all things medical. In this time of change for the medical and drug industry, Bob was the right man for the job. Bob was one of the first to photograph through a microscope. He and a team at Lilly built their own equipment to accomplish their assignments. A true pioneer in medical photography, Bob was awarded many international accolades.

Bob’s story is one of 84 Hoosier WWII Veterans featured in the book, WWII: Duty, Honor, Country by Hardwick & Hodgin.

Kate in the Middle: Giving Thanks