Tom’s Barber Shop in downtown Greenwood has been a local hangout since 1956. On the wall are framed photos, many of them of local basketball players. A solo shot shows a young man in a classic basketball stance. It’s John Bass, Indiana’s 1941 Mr. Basketball from Greenwood High School. 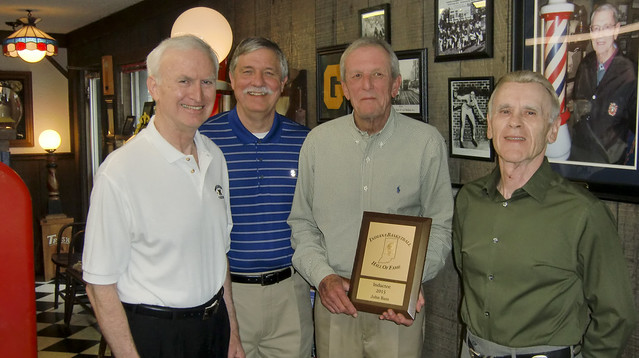 Record Setter
Yes, Greenwood has a son who reached lofty basketball heights. Those regularly viewing that photo of honor assumed that Bass was in the Indiana Basketball Hall of Fame. After all, the center was the Johnson County scoring champion three years straight. He fueled his team to three county championships and a shocking sectional win in 1940 over Franklin, a team that had a 22-year lock on that title. To prove that win wasn’t a fluke, Bass and his talented teammates won the 1941 sectional as well.

The problem was no one ever nominated Bass for the Hall of Fame. Greenwood High School burned down mere months after Bass graduated in 1941, and World War II broke out the same year. When Bass returned from his Army war stint, he went to work. His father had died tragically in a crash less than a week into Bass’s freshman basketball career. As the only child, he always worked to help take care of his mother. After the war, Bass came home. He worked. He married. By then, the community had moved on.

The Three Wise Men
Different reasons prompted three men who had never met to begin working on the nomination of Bass for the Indiana Basketball Hall of Fame in 2014.

David Jones wrote the nomination motivated by his father’s deep respect for John Bass and his under recognized accomplishments. During the process, he went to the barbershop to gather more information. Freelance sports journalist Dan O’Brien saw the photo at Tom’s Barber Shop every time he went in for a cut. Once he found out Bass needed to be nominated, he began researching old newspaper clippings on microfilm. Game by game, O’Brien reconstructed the stats Bass had accumulated. It was not unusual to discover Bass scored close to 25 to 50 percent of his team’s points in each game. He gave those stats to Jones for the nomination.

Jim Higdon grew up playing with Johnny Bass, Jr. He saw the Bass, Sr. photo in Tom’s Barber Shop too, but it was an article by a local sportswriter about Bass that prompted Higdon to call the Hall of Fame. Finding that the nomination would close the next day, he was told he could speak for three minutes in favor of the nomination come fall. Higdon drove to New Castle to give his pitch.

One such personal story concerns the All-Star shirt: The boys who played with Johnny Jr. got to try it on when they visited the house. However, Bass says his dad was not outspoken about his Mr. Basketball status. However, people would often point to his dad and ask the person next to them, “Do you know who this guy is?” Bass Jr. adds, “I think his proudest moment was being Mr. Basketball.”

Hall Of Fame
Give honor to whom honor is due, says a proverb. For Mr. Basketball 1941, Greenwood High School’s own Bass, that time arrived in March 2015 when he was inducted into the Indiana Basketball Hall of Fame. Bass never lived to see the induction. He died in 1989. His wife died in 2014. But their son lived to see the honor.